Neill Blomkamp returns from his hiatus with the Canadian supernatural possession horror Demonic, shot in secret in British Columbia last year. Since his impressive début with the South African set dystopian sci-fi District 9 (2009), the director suffered a lukewarm response to Elysium (2013), that worsened with the critical dismissal of Chappie (2015). Demonic risks continuing that downward trajectory, with a work that will leave its audience feeling deflated, the distance growing between first impressions and his lacklustre maturation.

The story centres on Carly (Carly Pope), who unleashes a terrifying demon by entering the mind of her comatose, serial killer mother. It’s all you need to know going into the film, and as expected it’s technically well made, but what’s glaringly absent is an attention to the craft of storytelling.

Focused on the demon’s rouse, Blomkamp makes the fatal misstep of forgetting that it’s as much about the journey as it is the destination. If a film is the means of expressing an idea, here’s the picture of soulless storytelling, that can be derided as a painting by numbers exercise. The story is advanced at the expense of character development, and in two separate moments characters labour under heavy-handed exposition. They’re the equivalent of pawns on the chessboard – minor pieces that are expendable. The infantile imaginings of the heroic act of throwing oneself into a conflict, echoes simple stories such as David versus Goliath. In essence, Demonic is about a test of willpower between the human and the supernatural, but it lacks ideas to make it a compelling one. 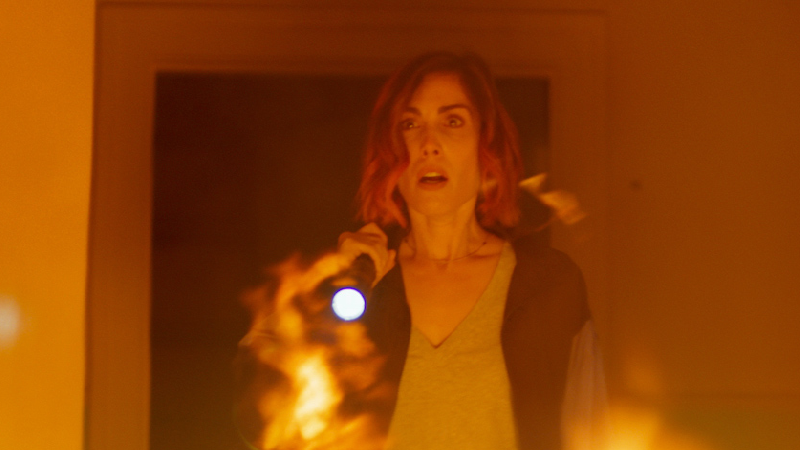 Possession horror is traditionally a traumatic physical ordeal, and in a change of tone, Blomkamp flirts with the idea of what if Carly’s interaction with her possessed mother could be taken it into a mental space, that would then bleed into the waking state? Taking the idea of possession into another realm of consciousness or reality is a curious one. Horror often plays around with the idea of the doorways that link the physical world of the living with the supernatural, metaphysical and dream realms. We’re left to imagine for ourselves the realms technology could open, and with it the danger of the doorways that threats can enter, or lure us through.

All signs point to Demonic being an early draft of a story rushed into production – the idea let down by the storyteller. What’s left is an idea propping up a rudimentary genre picture, that feels tired and worn-out long before its end. While it promises much, it lacks the thoughtfulness to move past the simplicity, to become something more than an archetypal ordeal for the protagonist.

Blomkamp positions himself as a technician and not a storyteller. The hope District 9 gave rise to, that we were witnessing a filmmaker of note emerging is fading, if it that hope has not been extinguished. There’s no ambition, no courage of conviction that we originally saw back in 2009, and most significantly, it’s a film that commits the gravest of sins. A wasted opportunity.

Demonic was the opening night film of FrightFest 2021. Released in UK cinemas and on Premium Digital 27th August. It will be available on Blu-Ray and DVD 25th October.

Jazz on a Summer’s Day

The seminal concert movie breezes back into cinemas six decades later with a shiny 4K facelift - out on Friday, August 27th [Read More...]

This queer Georgian drama takes an iceberg approach to narrative, resulting in an affecting portrait of living under repression - live from Locarno [Read More...]

Starting off slowly before growing into a masterful work, this Tunisian movie is one of the standout films from the Locarno Film Festival. [Read More...]