"Greasy movie"
A widower embarks on a literal and metaphorical journey across the UK, the from John O'Groats to Land's End - drama starring Timothy Spall is in cinemas on Friday, August 27th

Tom (Spall) has recently lost his wife Mary (Phyllis Logan) to cancer in a very short and intense battle: the terminal disease claimed her life in just a few months. Free bus pass to hand, he packs her ashes in a small briefcase and sets off on bus journey from Great Britain’s Northeastern tip John O’Groats (in Scotland), all the way to the country’s Southwestern extreme Land’s End (in Cornwall). His aim is to scatter her ashes in the location where they met and fell in love shortly after WW2.

Sixty-four-year-old Timothy Spall is made to look much older and frailer. Grey-haired and wrinkly Tom is probably in his 80s, his laborious walk in stark contrast to his unshakeable determination to cross the country. He will return the remains of his loved to the other side of the country come hell or high water.

At first, Tom is quiet and introspective, briefcase firmly on his lap and head down, hovering somewhere between mourning and stoicism. He gradually opens up and mingles with the strangers whom he meets on his bizarre journey. They offer him food and comfort. Some invite the old man into their home. Eventually the journey gets bumpy and Tom literally gets harmed. The physical wound, however, does not hold him back. He will not allow a hospital visit to delay his quest. 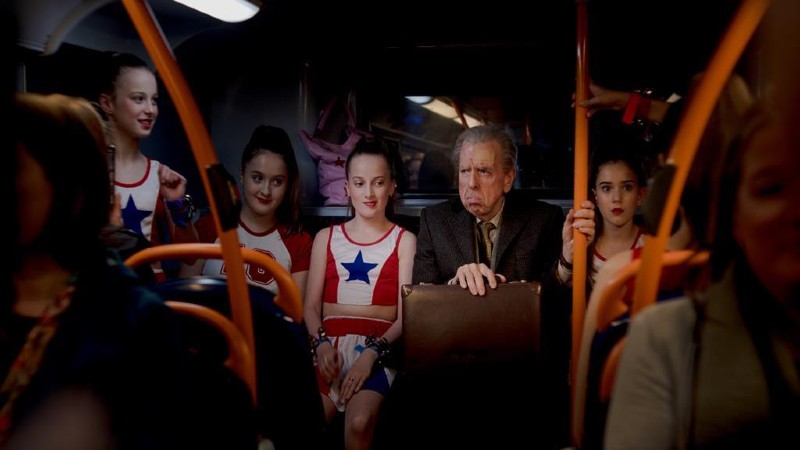 Tom’s journey is both literal and metaphorical. We see the splendid British landscapes, from the verdant hills of Scotland to the rocky Cornish coast. And we also experience Tom’s itinerant emotions. The movie has an unusual structure: memories are interwoven with the bus journey in the opposite direction. Tom’s memories travel more or less forward (from his youth up until his wife’s diagnosis), while his bus journey takes him backwards 838 miles to where he started his life. Similarly to Francois Ozon’s 5×2 (2004), The Last Bus relies on beautiful memories contrasted against the knowledge of a tragic denouement, with a narrative arc constantly zigzagging back and fourth in time. The ending is entirely predictable, and intended as such.

Despite a terrific performance and a well-meaning script, The Last Bus is not a masterpiece. There are quite a few redundant narrative devices, such as the repeated efforts to paint Tom as an anti-racist facing up to bigotry. The characters he meets lack depth, and the interactions often feel banal. Plus an emo soundtrack sounds slightly misplaced. Unlike Tom’s love for Mary, this is not a movie that will stay with you forever. Still, it will probably make you smile.

The Last Bus is in cinemas on Friday, August 27th.