"Dirty gem"
One man's obsession with his designer jacket turns him into a serial killer, in this dirtylicious black comedy starring a smiling Jean Dujardin - in cinemas Friday, July 16th

This French black comedy was directed by Quentin Dupieux, previously made the killer tire film Rubber (201). It co-stars Jean Dujardin, best known for his lead role in The Artist (Michel Hazanavicius, 2011), and Adèle Haenel (from Celine Sciamma’s Portrait of a Lady on Fire, 2019).

Dujardin plays George, a middle-aged guy who arrives at this hotel in a mountain valley. He has recently been divorced and is having a kind of mid-life crisis. He becomes very obsessed with a deerskin jacket that he has bought for €7500 along with a digital camcorder, in what turns out to be not a very good deal. He starts making a film with the camcorder, then meets a local bartender, Denise, played by Haenel. From there, Deerskin becomes a very odd yet enjoyable movie about an impromptu serial killer. Denise becomes his producer, and they form an odd alliance.

It’s a very funny film, with a bit of Man Bites Dog (Benoît Poelvoorde, Rémy Belvaux and André Bonzel, 2012), although it’s not a found-footage mockumentary. It’s a satire of filmmaking and mid-life crises, with an anarchic sense of humour. When Deerskin goes off the walls, it happens in a very amusing fashion, especially with one murder montage. It’s also a touching film about loneliness. It is brilliantly paced, with a pair of good performances. It has a fun energy, with absurdist humour and amusing use of jolly tunes to soundtrack the mayhem that occurs later on. 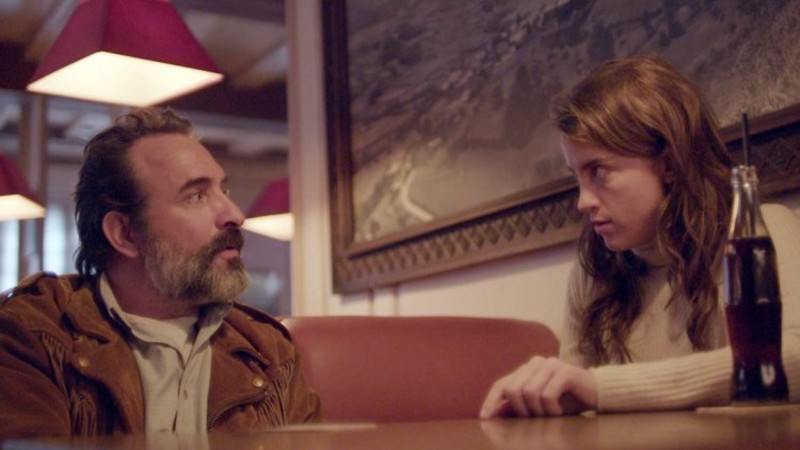 Possibly the jacket is possessing Georges – but that supernatural twist is definitely open for interpretation. It presents a good character study of a man who becomes some sort of likeable monster but you almost. Dujardin is helped by very charming smile. His character here is deeply narcissistic and resorts to some unsavoury things, but his preformance makes it more palatable. It is a daring role for Dujardin to take on after The Artist, and it showcases his broad acting spectrum.

Deerskin was one of the big surprises of last year when originally released on HBO Max in the US. Sadly it fell under the radar. Now it is getting a small art-house release in the UK, and it’s definitely one of the better movies of the last couple of years: outrageous, fun, and not to be missed. It also shows how nice it would be if more films came in at 77 minutes.

Deerskin is in selected cinemas on Friday, July 16th.