"Dirty gem"
Puzzlebox drama about a filmmaker kicking the wounds from career issues leaves the viewer feeling disorientated and yet profoundly engaged - on VoD on Friday, April 23rd

It’s difficult to talk about this American dirty movie without giving the game away. Establishing dialogue suggests a traditional, staid indie mumbler but the film soon morphs into a more experimental space, cohering into a satisfying, chewy thinkpiece by the end; a millennial reimagining of Mulholland Drive (David Lynch, 2001) by way of Adaptation (Spike Jonze, 2002), updated with more pertinent issues to filmmaking today.

The film is built around two lightning rod scenes, reflections of the same event told from wildly different contexts. It is a diptych of competing quantum narratives with the viewer left to decide whether either, both or neither contain any truth. The implied throughline of a writer exploring these hypotheticals does little to clarify whether the plot is drawn from experience or directly conjured, a torturous creativity writ large.

Initially, Black Bear is drenched in the trappings of a psychological thriller: a lakeside cabin, voyeuristic shots from the trees and jags of discordant noise. Here, actor/filmmaker Alison (Aubrey Plaza) is in scenic retreat, licking the wounds from undefined career issues and perhaps penning a new screenplay should inspiration strike. The pristine, upstate refuge is owned by young couple Gabe (Christopher Abbot) and Blair (Sarah Gadon), pregnant with child and relationship problems alike. It doesn’t take long before these issues bubble over, with scalding conversational barbs that ensnare Alison in the middle. There is the suggestion that she is not an unwilling participant. Indeed, murky motivations suggest her as a chaotic neutral catalyst of things to come. These sequences are Black Bear at its best, with writer director Lawrence Michael Levine effortlessly capturing the circular arguments and claustrophobia of a relationship in decline. 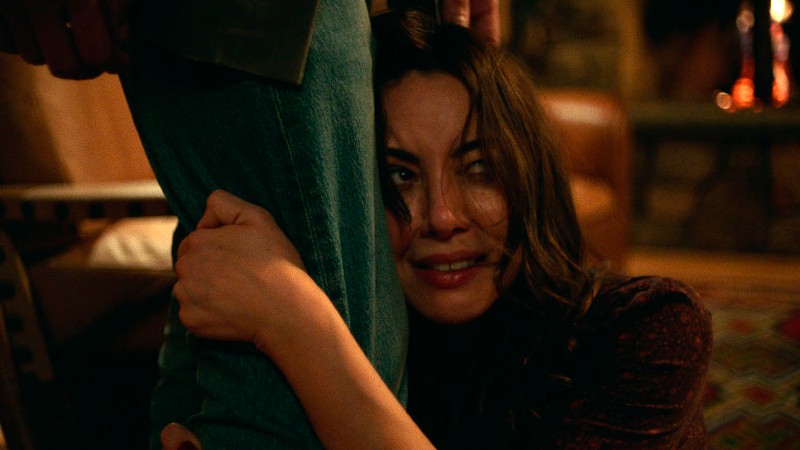 Tertiary ensemble characters bring levity and lightness to later sections of the film, a much-needed breath of fresh air after the ratcheting tension that precedes them. Everyone manages to pop as individuals – no mean feat given their relatively light involvement to the plot – but it is the central tripod of Plaza, Abbot and Gadon that stabilises both sides of Black Bear. This is their showcase and each gets a lot of space in which to play. Aubrey Plaza is truly impressive here. Elsewise, Christopher Abbot is coming up fast on Adam Driver and Andrew Rannells for the crown of most interesting male lead from the cast of ‘Girls’. A poundshop version of his early character arc in the later section of the film only serves to magnify his performance. Of the three, Sarah Gadon is definitely the lesser known quantity but is equally magnetic onscreen. Perhaps a shade more one-note than the others but her characters aren’t as distinguished, by no fault of her own.

It is not a seamless film. The stitch in the middle is deeply jarring by design but may turn off casual viewers. Stick with it though – Black Bear is a rewarding challenge and a fun watch to boot. It also manages to avoid most try-hard indie flick flourishes, excepting the muddied metaphor of an actual bear haunting proceedings. Maybe a dangerous scavenger picking over the ruins of interpersonal relationships for its own benefit, just like artists in general??? Like much of the film, it’s open to interpretation.

Black Bear is out on all major VoD platforms on Friday, April 23rd.

It's finally that time of the year when we ask our writers to pick their favourite dirty movie of the year; the dirtylicious list is full of delightful surprises! [Read More...]