"Dirty gem"
Following call-girls, thugs, secret services and the fortunes of an ambitious woman, Sylvie Verheyde’s film exposes the underside of the myth surrounding "the Lady Pimp of the Republic" - available now on Netflix

It’s 1968 in the French capital’s finer districts and Fernande Grudet, known as Madame Claude (the title of the new film by Sylvie Verheyde, which is based upon real events and is released worldwide on Netflix today), is at the wheel of a small yet prosperous business: 200 hand-picked, young women on behalf of whose charms Grudet negotiates, rubbing shoulders with members of the upper echelons who move within the high-level political and financial circles of the late Gaullist era. “My girls work all over Paris. Business is going well. I take 30% (…) I realised very early on that most men treat us like whores. I decided to be the queen of the whores. To use our bodies as arms and as armour, to never suffer again“. But proximity to power is a dangerous thing…

The film drops anchor in the wings of this shady world, where police protection can be obtained in exchange for information (short notes on ministers’ “deviant” sexual preferences, for example) and that of the Parisian milieu by way of envelopes stuffed full of banknotes and promises of long-term friendship (notably with Jo Attia, played by Roschdy Zem, who settles arguments between thugs from her cabaret bar in Montmartre). The girls overseen by Madame Claude (to whom Karole Rocher lends her ideally harsh and inscrutable features) let loose at Castel, dress themselves in luxury brands and share anecdotes of tricks turned with John Fitzgerald Kennedy and Marlon Brando, but they also, on occasion, suffer violence at the hands of their clients (“it will leave a mark, but in two days’ time there’ll be nothing there; a nice shower, a good night’s sleep and you’ll be right as rain”, “it’s just a part of the job”, their boss consoles them). A high-contrast picture begins to take shape of female emancipation on a knife edge, much like in the case of the clued-up girl from a good family (Garance Marillier) who is taken under wing by the woman who will eventually become “the Lady Pimp of the Republic”. 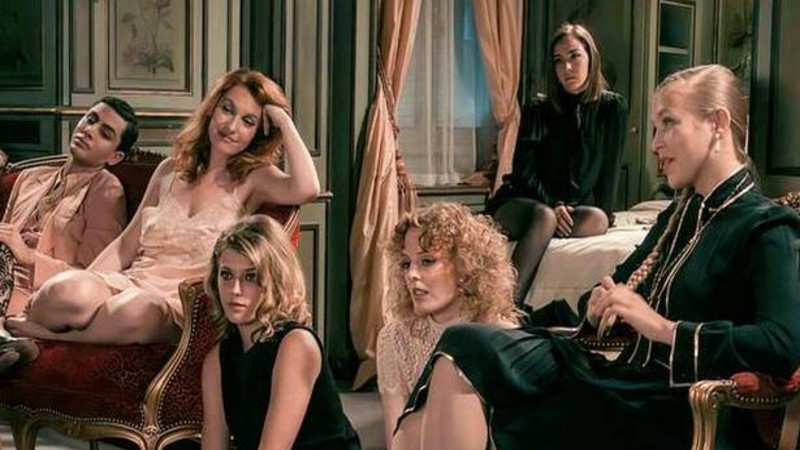 Ultimately, the portrait painted by Sylvie Verheyde is one of a highly contradictory woman. Madame Claude has erased extreme poverty from her provincial background, grown herself a thick skin (“to no longer depend on anyone, protected by money, power; no flaws, no weaknesses, no Achilles heel”), earned herself a certain social standing (“in the space of ten years, I’d become a respectable and respected middle-class woman. Nothing could stop me anymore, I was untouchable”), given up on all things sentimental (“when you start to make money, the jackals come running. A man? I don’t have time for love”) and runs her business like the mother of a small yet happy family (who offers zero affection when problems arise). But her rise comes at the time of a high-profile scandal (the Marković affair), and the Intelligence Services (with Pierre Deladonchamps playing the intermediary) interfere in her business, forcing her girls to carry out secret (and unsavoury) missions on behalf of the State. It’s the beginning of a chain of events in which Madame Claude is increasingly seen as a mere inconvenience…

Navigating between a film noir, a psychological study of the protagonist, a fictional story (enhanced by the voiceover coming courtesy of the main character) and a mirror reflecting standards of behaviour which would be swept away by the 1970s, Madame Claude roams around within the bowels of a highly documented myth, maintaining a controlled distance, exploring hot-cold atmospheres and, ultimately, echoing the complex personality of this woman whose notoriety has gone down in history. It’s a foggy grey zone which lends the film its many strengths (the sharp portrayal of the main character, the brilliant cast and the wide range of scenes, notably of an ensemble nature), but also one or two flaws (subplots which at times feel forced and the inevitable skimming-over of the film’s many events), although the sexy, “feminist”, thriller feel of the movie fits perfectly with the Netflix path.

Madame Claude is produced by Les Compagnons du Cinéma alongside Wild Bunch (who also sold the film worldwide), TNG Productions and Dum Dum Films. It is out now on Netflix