"Dirty gem"
Mother and son face each other off, in this probing American crime drama starring Elisabeth Röhm - from the London Independent Film Festival

By now, our expectations of drug movies may have seemed to have exploded into something beyond self-parody. It’s not simply that films have been following the footsteps set by Vince Gilligan – indeed, any script that deviates from the tried and tested formula set by a chemistry teacher turned meth overlord is sure to earn brownie points for originality. While Michelle Danner resists the opportunity to pay homage to the television series Breaking Bad, she does carve her own tale of an underdog fueled by a movement that has serviced his wallet, only to see his ambitions come crashing down by members of his own family. Danner casts Elisabeth Röhm as Miranda Albers, the most intrepid of parents.

The story revolves around Albers’s son Aiden (Edouard Philipponnat), a troubled teenager busted for drug possession. The cops then force to go undercover in order bring down a dangerous drug lord. Railing against the regulations of crime cinema from the get go, Danner opens the film with the very arrest that sets the plot in place. Aiden is given two choices: Either he can go down for the drugs he’s sold around his school, or he can assist Detective Wall (Cameron Douglas) in his quest to net a local drug-pin. Yet the choice also represents something of a personal betrayal, as the parent who fed him growing up, is also the same woman who reported him to the police. Röhm is excellent, delivering a harrowing performance: after she’s thrown her child into the furnace, what can she do in order to soften the burn? 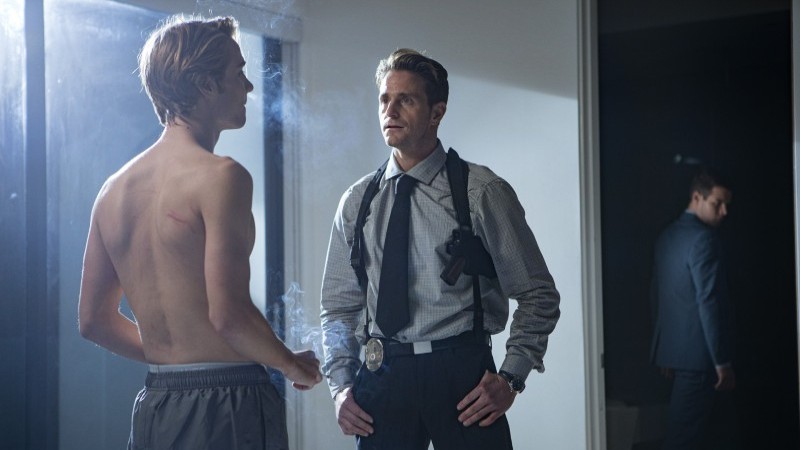 She reaches out to her boy, lost in the confines of daydreams, only for him to rebuke her efforts with silence. Aiden’s too feisty, plastering any memories of her with another woman whose body he now shares. Over a harsh and stormy conversation, Aiden defends himself against the actions he feels wronged him, only for his mother to remind him of his youth, uselessness and idiocy. Both wind up crying, and the sins that have kept her awake in the weeks since calling the authorities wind up streaming down her face. Then when Aiden’s friend enters, she departs, leaving her child to face the demons he has brought on them alone.

But Röhm’s character – in many ways, the voice of reason in a film surrounded by boastful, bullish men – never sacrifices integrity, even when her arc is sidelined. After her last agonised sighs has left his memory, the protagonist throws himself headfirst into a cycle of clubs, cars and coitus. When his enemies start shooting, his eyes ache for the woman who bores him, ready to return to more sedate territories. Her face, distant as the film races to its exhilarating climax, begins to seem more sympathetic. The action ramps up, and the domestic arguments that spurned him onto this mission seem paltry in comparison. And when he finally reaches that emotional epiphany, he captures the words all children hold for their parents, through bad times and through good.

Michelle Danner cuts straight to the heart of its audience, forcing them to question their values. But it doesn’t just shake viewers- it makes them grateful for everything their parents have done!

The Runner premieres at the virtual edition of the London Independent Film Festival, which takes place between April 9th and 18th.

The director of the London Independent Film Festival - the ultimate showcase for no-/micro- and low-budget movies - shares the dirty secrets from the years at the helm of the Festival (which takes place April 9th-18th) [Read More...]