A tumbledown, prefab home in sprawling but sparse Arkansas fields is the new home of the Yi family. Jacob (Steven Yeun) and his wife Monica (Yeri Han) were previously living in California since emigrating from South Korea an indeterminate time earlier, sexing chicks to earn their scratch. Long enough that children Anne (Noel Cho) and David (Alan S. Kim) are fully-fledged, bilingual Korean Americans but not so long as to comfortably settle Jacob and Monica. On paper they are a perfect nuclear Family in the mold of American propaganda, with Jacob yearning to make something of himself and his land. He has grand designs for their arable homestead and starts by planting debts that will hopefully flower into profitable crops. Monica, on the other hand, would rather they stop chasing waterfalls and focus on consolidating what little they used to have – how many new beginnings will finally be enough?

Minari thus establishes itself as a film about marital tension, farming hardships and the immigrant experience, with director Lee Isaac Chung deftly weaving these threads into a coherent yet all-encompassing tapestry of themes. There is evidence of a light touch at work, somewhat leadened by the overly heavy narrative beats that underpin the story. For every incremental step forward in the family fortunes, there are increasingly disastrous setbacks. A lopsided pendulum ever tending towards heartbreak. Indeed, there is an almost biblical reading of hubris and punishment to be had of Minari, more akin to a Coen Brothers joint than anything else.

Amidst this blanketing miasma of misfortune, a ray of sunshine keeps pushing through in David. Eight years young, whip-smart and deathly bored, he brings a much needed levity to proceedings and, ultimately, the film is told from David’s perspective. Whilst there is an even spread of screen time across the Yi family, young and old, certain events suggest a child’s-eye view, with snatched moments of overheard conversations in lieu of logistics or definition. A playful score and honeyed, golden cinematography confirms the conceit, suggesting images of a slide projector; a half-remembered childhood from a later point in life. Alan S. Kim carries this responsibility with a carefree, can-do attitude that belies the character’s ominous heart defect. 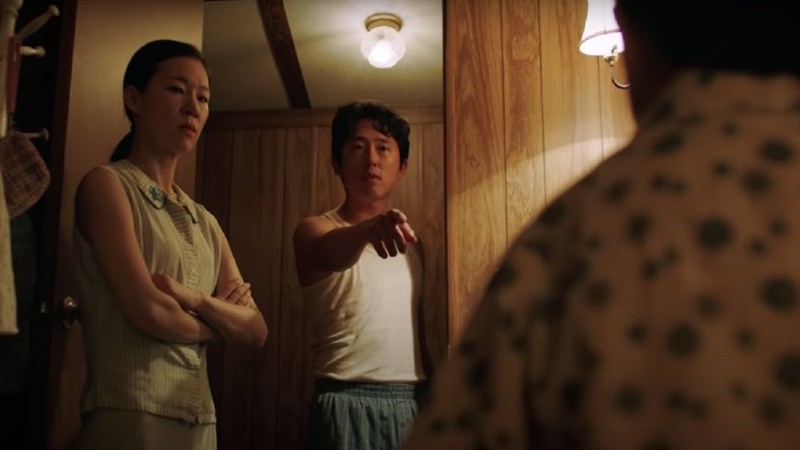 A turning point comes with the arrival of Grandma Soon-ja (Yuh-jung Youn). Brazen and somewhat incompetent, with a penchant for watching the wrestling on television, she is not exactly the grandma that David had in mind but no less loyal for all of that. Refreshingly absent is any clichéd animosity between Jacob and his mother-in-law. There is the suggestion of harsh words offscreen but the presentation to the children is that family comes first. Cast in the role of childminder, Soon-ja acts the foil to David’s cheeky but lonely chappy and it is a joy to see their relationship develop. Together they typify the main offering of Minari: enjoyable, warm-hearted performances that shed light on growing up in a context outside of your own.

Breakout star Kim is receiving his dues on the awards circuit and Youn has since received an Supporting Actress Academy Award nomination. There is also considerable buzz around Steven Yeun’s sad dad American Dreamer lad, culminating in another Oscar nod. However, it is Yeri Han who deserves plaudits in a typically thankless role. She manages to avoid the nagging wife/mother stereotypes and present her own steely determination. Monica’s ambition may be smaller and focused inwards, to her family, but it is no less valid an aspiration than Jacob’s. Overall, it is heartening to see the runaway success that Minari is enjoying, although a cynic may note a worrying trend emerging. It seems that each year the mainstream is allowing for a single Asian language film about a kooky family, such as with Shoplifters (Hirozaku Koreeda, 2018) and Parasite (Bong Joon-ho, 2019). Quality films, all, but diminishing returns are inevitable if this tokenism continues and the rich stories available here may be sidelined once more.