Mia (Daisye Tutor) just wants what any aspiring social media starlet wants: She’s seeking fame, frivolity, festivity, before throwing herself head-first into the comforting arms of the ultimate thrill. Fame, as ever, comes at a price, but the blood that drives her into fashion pursuits returns with a horde of bodies that seemingly crop up all over the place. The thrills that have pushed her to the precipice of celebrity are dressed up as a perverse game of life versus death, and Mia – once on the vanguard of a singular, shimmering countercultural movement – is thrown headfirst into a unit where death ties itself both inside and outside the world she so helplessly wishes to break.

We open in what appears to be a conventional photo shoot, where glitter and energy silhouette through a cascade of flashing cameras. Judging by the urine stain that has ruined her evening dress, one model runs to a bathroom to rid herself and her pet of the filth that belongs outside the realms of a gala. Mirroring herself on the image she wishes to project, she turns to face the guise of a faceless killer, and the figure – more nefarious than the waif thin body his victim suppresses – suffocates her with the heels that have proven her life’s trades. 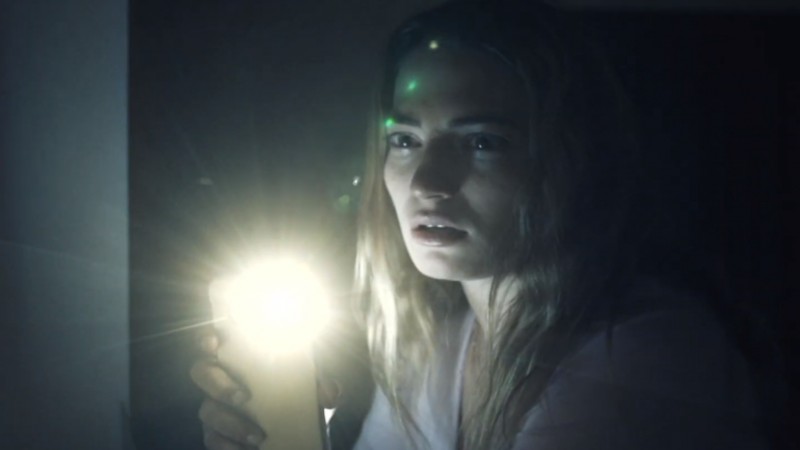 From then the metaphor (once thought metaphysical) turns into something more literal, as red follows Mia everywhere she turns. For a few reels, director Jennifer Harrington is content to let the horror unfold with little to no fanfare, positing the camera squarely on Mia’s face- striking, but tinged with a fear for a world even more surreal than the media platforms that many of our readers are surely using at this moment in time.

In keeping with the film’s neo-noir aesthete, the madness, murder and horror are presented in a number of gaudy, garish setups, using the viewers’ dependency of their mobile phones to the ultimate level. Wouldn’t you know it, the device that Mia once trusted as her vehicle of choice now turns on her to shoot out text after text after threatening text. It’s played almost as social commentary, tailoring this version of the web television series The Most Dangerous Game into something more prescient, personal and polished. There are nods to temptation, the film never explicitly states that social media is evil, but also refreshing displays of emotional pain. Within the many text messages that Mia writes to the very people who threaten her sanity, comes an aphoristic tale even more thunderous than the eerie, often ominous, splatterings thrust towards the film camera: Fame , however great the perfume, can never ruin a human spirit.

The only thing missing from this feature is a more memorable soundtrack, as Shook – all 89 minutes of it – is one of the most exhilarating horror pieces written in the last five years.

Shook is out exclusively on Shudder on Thursday, February 18th.