"Greasy movie"
Maximum Cage rage as the Oscar-winner takes on killer animatronics, in a film that is more fun than it has a right to be – out on Digital platforms from 12th February

The recent career of Nicolas Cage is an interesting one. The eccentric actor, once known for his Oscar-winning dramas and hit action movies, now veers between low budget cash grab roles and projects that lean into his Oddball reputation. He’s also stunningly prolific – Willy’s Wonderland is his 28th film in five years.

Produced by Cage, the plot makes for an enticing pitch and makes you wonder why no-one has thought of this before. In truth, they have – the story is strikingly similar to video game Friday Night At Freddy’s, and bears some resemblance a the classic episode of The Simpsons, Itchy and Scratchyland.

The star plays a drifter, cruising on the highway until his tires are shredded by spikes in the road. Running up a huge repair bill at the garage, a mechanic offers him a chance to “work it off” by cleaning up Willy’s Wonderland, an abandoned Chuck E Cheese style family restaurant. The owner of Willy’s makes a deal with him: stay in the restaurant overnight, and the fixed car will be there in the morning. What this drifter-turned-janitor doesn’t know is that he will have to survive the night against possessed animatronic characters, intent on eating him and some local teens who have broken in.

A straightforward premise, for a straightforward film. Director Kevin Lewis knows what the audience came for, and gives it to them in bucketloads. Cage’s janitor doesn’t speak, so the action is centred on him going one-on-one with demonic furry robots in a dingy roadside restaurant. If you’re at all confused about the type of film this is, your questions will be answered by the sight of Cage ripping out the metal spine of an animatronic bird. 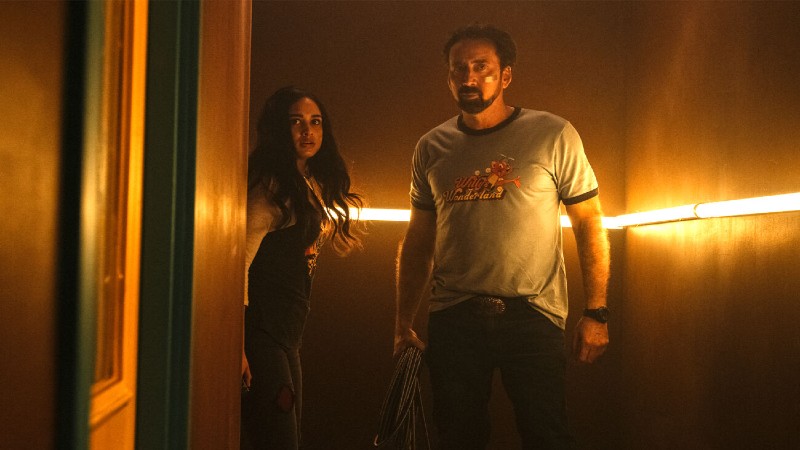 It’s utterly ludicrous. It hits the grindhouse tone just right in order to become enjoyable. Gratuitous gore is bathed in dim strip lighting, and cuddly critters cheerfully scream “I’m gonna gouge your eyes out, and feast on your soul!”. The monsters themselves are more bizarre than scary. Lacking any jerky or mechanical movements, they appear as what they are – actors in costumes. As such, the action looks like Cage is having violent fist fights with sporting mascots.

We have a side plot involving a Scooby Gang of roughly sketched teenage characters, led by Liv (Emily Tosta), who has a personal connection to the cursed eatery. Most characters are there to be munched, although there’s a pleasant turn from character actor Beth Grant as the local Sheriff who reveals the dark truth behind the monsters.

However, we’re here for our yearly dose of Cage rage, and that’s what we get. With no lines, he relies on quirky stares and twitchy mannerisms to convey the silent but deadly protagonist. Small moments elicit big laughs, such as stopping before an epic showdown to have one of his scheduled breaks (involving one of many soft drinks and an enthusiastic turn on a pinball machine). As cynical as it is, the actor screaming as he rips these things apart is entertaining – we defy you not to grin as his unnamed janitor stares down two characters as “heads, shoulders, knees and toes” plays on the jukebox.

Driving off into the sunset before the joke starts to wear thin, this bizarre cinematic experiment just about works. Willy’s Wonderland is exactly as silly as you think it is, coming off as a low(er) brow cousin to the likes of or From Dusk till Dawn (Robert Rodrigues, 1996) and Bubba Ho-Tep (Don Coscarelli 2002). While it could certainly be lost in the deluge of online content coming our way, this also has the potential to be a cult hit that furthers the legend of its truly unique lead.

Willy’s Wonderland is out on VoD on Friday, February 12th.