As we face the very real slow dissolve of our societies under the Covid-19 pandemic that currently grips almost all nations across the globe, watching an apocalypse unfold in quick time is actually quite refreshing. Disaster movies have always allowed the action and destruction to unfold in mere minutes. Events that take years or decades happen in real time happen in seconds. For example, an Ice Age impacts the entire northern hemisphere within a day in The Day After Tomorrow (Roland Emmerich, 2004). The real pandemic which we’re experiencing is already over a yearlong with only glimmers that an end might be in sight and normality might return. Even disaster films that deal in viruses – such as 12 Monkeys (Terry Gilliam, 1995) and Contagion (Steven Soderbergh, 2011) – rip along at a jet plane’s pace in a race to contain the spread.

Our heroes of director Ric Roman Waugh’s Greenland are structural engineer John Garrity (Gerard Butler), his wife Allison (Morena Baccarin) and their young son Nathan (Roger Dale Floyd). They live a comfortable existence in suburban Atlanta. Although John and Allison are currently on a break from their marriage, they are attempting reconciliation for the sake of their son. Whilst out shopping with Nathan, John receives an alert on his phone instructing him that his family has been selected for shelter from some forthcoming and as of yet unknown disaster. The film’s other main character that hangs over the entire film is the comet Clarke, which is outgassing and breaking apart in the cosmos and making unpredictable turns towards the Earth. It’s origin is unknown, but there are hints that, like our real-life interstellar visitor Oumuamua, it comes from another solar system. Its erratic nature and sheer size means that the Earth will receive a pummeling from the smaller fragments until the largest fragment hits land and causes an extinction level event.

One such smaller fragment is destined to make an impact in the ocean and in one early scene, John and his neighborhood friends watch the news coverage of the impending impact and gleefully count down as it smashes into the city of Tampa, Florida instead of the relative safety of the ocean which was its original trajectory. The shockwave from the blast permeates over a thousand mile radius and the realisation soon hits that the Earth is in peril. News reports confirm that Clarke is coming to wipe out all life.

As this unfolds, John is contacted once again by Homeland Security and a message appears on his television screen instructing him and his family to make the journey to a nearby air base where they will be lifted to safety. The rest of his guests receive no such calls.

The family escape their suburban neighbourhood and make the journey through the already burgeoning societal collapse and climb over the desperate hoards who have clocked on that a lucky few have been selected to survive the coming devastation. At the gates of the airbase, the family are all given wristbands that identify them as potential survivors. But, disaster strikes (and not of the comet variety) when John and Allison realize that Nathan’s insulin medicine for his diabetes has been left in their abandoned car. John rushes back whilst Allison and Nathan attempt to board one of the planes. When the army discovers Nathan’s condition they turf both of them out of the base citing that long term illnesses cannot be tolerated in the post-catastrophe world. With Nathan in tow, and John still missing, Allison decides the best place for them is with her dad, Dale, in Kentucky. They loot a pharmacy for Nathan’s meds and accept a lift from Judy and Ralph (Hope Davies and David Denman), a seemingly helpful couple who soon turn on Allison and kidnap Nathan when they realize he could be their ticket to survival. Judy and Ralph steal Allison’s wristband and leave her on the side of the road. With Nathen in tow, Judie and Ralph attempt to persuade the army guards of a nearby air base that they are a family chosen to board the planes. Nathen grasses them up and Judy and Ralph are marched off whilst Nathen is sent to a makeshift FEMA hospital.

In the meantime, John hops aboard a delivery truck that will pass through Kentucky. He sits in the back of the truck with a group of men who square up to him when they notice his wristband. A fight ensues and the truck crashes sending the passengers rolling. Two of the men attempt to jump John and steal his wristband, but he overcomes them by smashing a hammer into one of the antagonists’ skulls, a violent and gruesome act that clearly shocks him to his core.

Allison is picked up on the highway and driven to the air base where Nathan was last seen. She makes her way through the Fema tents and finds Nathen being looked after by a caring nurse. They continue on their journey to Dale’s house. 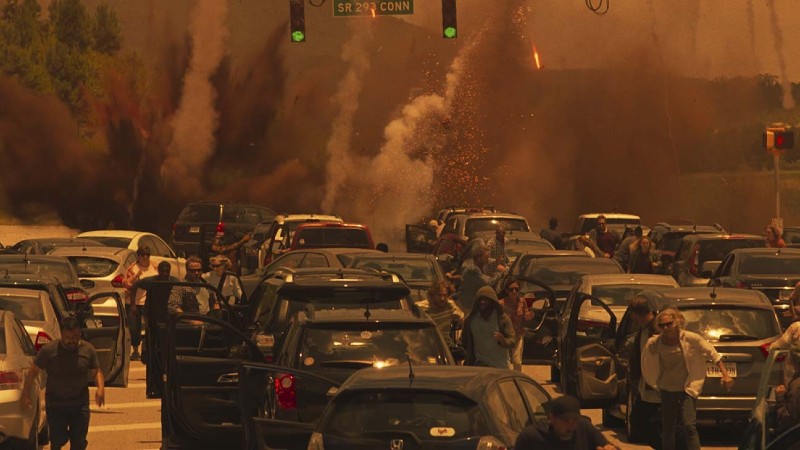 After stealing a car, John arrives at Dale’s (a formidable Scott Glenn) place, interrupting a game of poker. There is obviously some unspoken animosity between John and Dale and we learn that John had been unfaithful to Allison in the past. This is obviously the reason for their recent separation. Dale receives a call from Allison at a roadside store. She and Nathan are just down the road. Dale and John set off to collect them and the family is reunited.

At this point, Allison is content to remain with her father and see out the coming extinction together, but from a conversation he had with one of the men back in the truck, John knows of a location in Canada where a private plane is flying people to a survival bunker in Greenland. With the largest fragment set to land in mere hours, John convinces Allison that they have a shot at survival if they move fast. They bid a tearful farewell to Dale and begin the journey towards Canada. They cross a deserted border crossing and locate a small airfield where a tiny plane is just about to take off. John plays chicken with the plane as it begins its take off run. The plane pulls to a stop and the furious pilot jumps out of the cabin. John persuades the pilot to take them all to Greenland. The pilot agrees on the condition they bring no luggage. As they descend into the vast tundra of Greenland, a smaller fragment smashes into the ground close by and knocks the plane’s engine out. They crash land close to the bunker and a military truck picks up the passengers and ferries them into the bunker just as the largest fragment of the comet hits somewhere in Europe. The earth shakes as the shockwave reverberates across the globe.

After the catastrophe, we see images of a perished Earth. Cities and landmarks utterly destroyed sit under a murky red sky. After a year or so, the survivors, including John, Allison and Nathan emerge from the Greenland bunker. The dust that has swirled across the atmosphere has settled, but the landscape has radically changed. A little bird tweets into view. Not all life was banished. Radio signals from bunkers across the globe indicate that others have also survived and that humankind has a chance to rebuild itself.

Unlike some other disaster movies that might bring in an even handed scientist, or a caring government task force, or a space agency with ample solutions to the cataclysm, Greenland lets it all play out from the perspective of the Garrity family as they traverse the wasteland of society. In this sense, placing us bang inside the narrative of the film and letting us play out these actions as they happen. Gerard Butler, who’s most notable roles have seen him cast as heroic, yet violent, men of authority, gets an opportunity to be the hapless and hopeless victim to circumstances beyond his control. Apart from one or two scuffles with desperate people, his character mostly runs in fear and runs on some primal instinctive survival mode in order to save his family. John actually shows outward ticks that the violence he is witnessing is eroding his sanity. His hands begin to shake at the thought of the violent act he committed against the man who tried to steal his wristband. Of course, violence and survival is now the way of the world. Live by the fists or die by them. It could have been easy to cast Butler as the muscled savoir, but the everyman he portrays here reflects this story better.

Greenland is a valiant attempt to surf between the more existential films that play on the end of the world scenario, such as Don McKellar’s Last Night (1998) and Lars Von Trier’s Melancholia (2011) and the genre’s more action-packed variants such as Deep Impact (Mimi Leder, 1998), Armageddon (Michael Bay, 1998), and 2012 (Roland Emmerich, 2009). It leans closer to the latter movies by virtue of casting a muscular action star in the main role.

Those looking for the genre’s classic destruction porn might be disappointed in Greenland. Most of the devastation caused by the Clarke comet is seen through the lens of TV news broadcasts. Most of the best scenes are already featured in the film’s trailer. Viewing the images through a TV or a phone device allows a distance that most of us would possibly experience if these events were to actually occur. In fact, through the lens of our real-life pandemic, most of us have spent months in lock-downs and seen our cities empty whilst the pandemic rages and we ourselves have not been touched by the actual virus, yet we feel its consequences nonetheless and watch TV reports on the world’s hotspots (note: I am writing this from Canada).

Whilst the scenes of destructive violence might not be on offer, there is some genuine gut punching emotional scenes to be found. Allison’s final farewell to her dad and the final fraught moments before the larger fragment makes impact offer ripples of emotion and genuine suspense. Greenland might not reach for the lofty heights that some of the disaster movie genre aims for, but it offers an entertaining and emotional escape from our current dilemma, and whilst not a classic in the form, it clearly has a heart and a brain that works in conjunction with each other and a set of main characters you actually give a hoot about.

The Strange Coalescence of Dirty Dancing and Blue Velvet

The blithely joyous musical and David Lynch's somber cult classic have more in common than it may seem at first; in fact, the two films are cinematic bedfellows - British born and Canada based writer Steve Naish digs under the surface of both films and unearths their dirty and hidden facets [Read More...]

Our dirty questions to Panos Cosmatos

As the instant classic Mandy premieres at the BFI London Film Festival and hits UK cinemas, Lara C. Cory met with the Greek-Canadian filmmaker and found out where the filthy story began! [Read More...]