Celestino (Amiel Cayo) is a middle-aged peasant dwelling on the Andes Mountains. He lives a largely solitary life. His mother and his wife have passed away. The only humans around are his daughter and his mother-in-law, but his only child too is about to depart. Life here is slow and uneventful. Even the lorries move laboriously. One single departure could have life-changing consequences for everyone. Celestino’s daughter wants to live with her aunt in search of better opportunities, leaving a scrawny cow named Samichay as Celestino’s only companion.

Samichay is a singular movie in more ways than one. It is filmed at an altitude more than 5000 metres, in black and white and almost entirely spoken in Quechua, the local indigenous language. The pace of the narrative is gentle and slow, doused in subtle lyricism. The breathtaking landscapes are a character per se. While Samichay provides Celestino with milk and companionship, the mountains provide the poor hermit with a home and – perhaps more importantly – soul nurture.

Nurture of a more concrete type, however, is far more scarce. Plants refuse to grow in the extremely cold, barren and lifeless environment. Trees are nowhere to be seen. Celestino attempts to sow a potato, only for the birds and insects to help themselves first. He hopes that Samichay will provide him with “a beautiful offspring”. The problem is that both the cow and the soil are equally infertile. So Celestino – who resisted the idea at first – sets off on a quest to sell the cherished bovine. 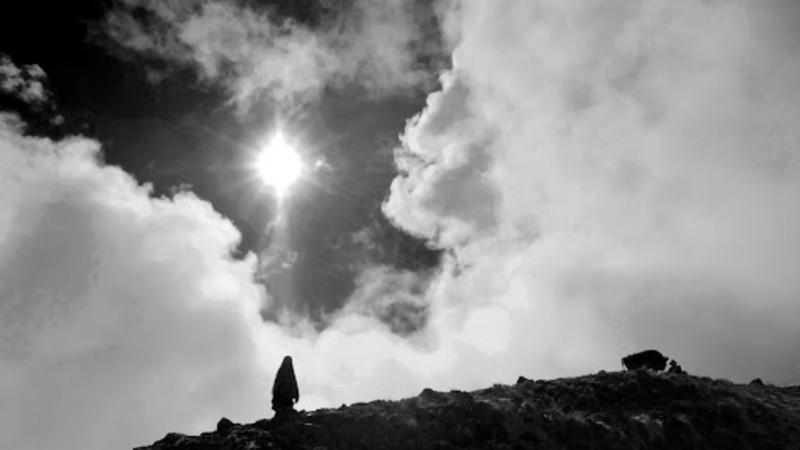 He searches for an elusive man called Don Fermin, who he believes will purchase the animal. Upon reaching his house, he finds out that something very unexpected has happened. So he has to continue his lonely journey across the mountains in search of a buyer. Celestino believes that his cow is a lucky charm that will bring good fortune to its buyer, but her appearance suggests otherwise: she is the picture of malnutrition, her back sagging down, the anatomy of her rib cage at full display.

This magnificent and yet inhospitable environment feels detached from our world. Tall mountains dressed in white clouds and narrow winding roads emphasise the remoteness of the region. A handheld camera emphasises the precariousness of Celestino’s existence. His house is entirely made of stone, with little more than a large stove and a few utensils. This is as close as you will get to a caveman in the 21st century.

This little precious gem from Peru is both a sensory and a human experience. The mystical landscape will inspire you with awe. The sky is permanently hazy and mysterious, yet the sun and the moon are surprisingly crisp. The laconic and stoical Celestino too will stir your emotions. He forges ahead in search of a buyer and a purpose for his life, despite his many handicaps. It comes full circle at the end, when nature looms large in its unforgiving splendour over the frail existence of Celestino and his bovine companion.

Samichay, In Search of Happiness won the Best Peruvian Film Award at the Lima Film Festival in August. It will premieres online on October 8th, 9th and 10th in Peru, the first such premiere in the history of the country.