This is the first film from former Portland-scenester-turned-filmmaker Miranda July in nearly a decade. She made a bit of a splash at Sundance back in 2005 with Me and You and Everyone We Know, and in between then and now she made The Future in 2011. Kajillionaire is the first feature where she doesn’t appear in the film.

Evan Rachel Wood stars as Old Dolio Dyne (yes, that’s the character’s name). She has a pair of abusive grifters for parents, Robert (Richard Jenkins) and Theresa (Debra Winger) Dyne, who basically use their daughter to steal mail and do all the other dirty tasks. The parents soon invite Melanie (Gina Rodriguez) into their strange little world of cons, but as Old Dolio experiences a world outside her parents’, the relationship between them breaks down.

The character of Old Dolio is an emotionally stunted individual who speaks in an overly low monotone voice and has extremely long blonde hair, which suggests she has never had a haircut because the parents are such cheapskates. After the initial intrigue of these characters fades away, July’s unbearable quirkiness just takes over the film. The best films that are, for the lack of a better word, “quirky” are generally made by real cinematic filmmakers, such as Wes Anderson, Hal Ashby or even some of Tim Burton’s early films – but July is working without the resources those filmmakers had at their disposal (such as cinematographer Robert Yeoman, in the case of Wes Anderson). 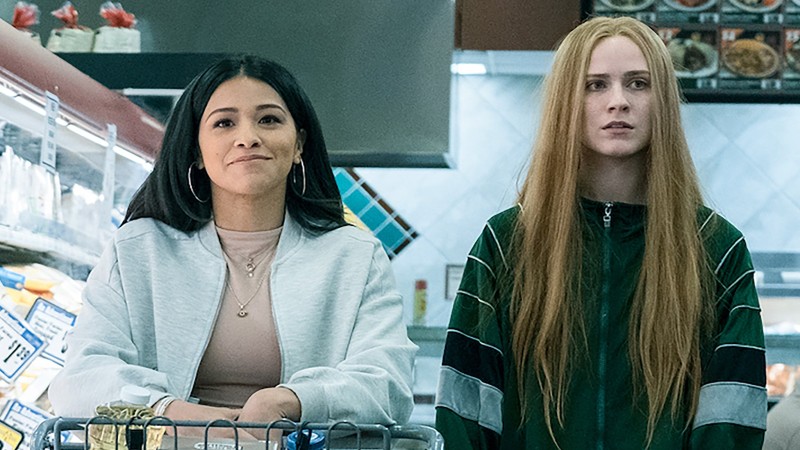 Visually, it’s just a very typical American indie movie, without any real visual sense. It has a flat nondescript visual palette that is very much in tune with somebody who cut their teeth on the DV revolution of the mid ‘00s. This aesthetic is still sadly prevalent even with the massive leaps in technology of digital cinematography. To give it some credit, the dilapidated office that the family lives in, with the pink foam that seeps through the walls from the bubble factory next door, is a somewhat striking image.

Overall, the film has a heart but it’s such an alienating experience that it’s hard for the audience to connect to the characters, especially since the parents are really awful human beings. Old Dolio is just being as “quirky” as possible; Melanie is little more “human,” but also incredibly annoying in her own way. It’s also painfully unfunny (I didn’t laugh or even smirk once) as it drags on and on for its 100-minute running time. The film’s final moments have sweetness, but by then it has already overstayed its welcome by at least an hour. Miranda July needs a co-screenwriter to help craft a narrative – maybe next time she could collaborate with her husband Mike Mills, the writer/director of Beginners (2010) and 20th Century Women (2016).

Kajillionaire has just premiered at the BFI Film Festival. It’s out in cinemas (on general release) on Friday, October 9th. It’s a very divisive movie, as is July’s oeuvre in general