"Greasy movie"
Community devastated by the biggest wildfire in the history of California refuses to seek pastures green, instead remaining loyal to their land - in cinemas Friday, September 25th

Paradise has never looked this menacing before. The titular Californian town of 26,000 inhabitants was engulfed by a wildfire of biblical proportions on November 8th, 2018. The tragedy became known as Camp Fire.

This National Geographic documentary starts out in the middle of the fire, with images that the locals presumably captured with their phones. A genuine vision of hell. Giant flames quickly spread through the sparsely populated community, swallowing the houses and everything inside them. Billowing clouds of smoke obliterate the sun. It’s impossible to say whether it’s day or night. Crackling noises prevail, while sparks fly around like insect. Children cry as they see a patch of blue sky, suggesting that their family have found the way out of the inferno. Only in Oliver Laxe’s Fire Will Come (2019) I remember such vivid images from inside a real wildfire.

Drone images reveal the dimension of the destruction, with the grey rubble and charred trees scattered across 240 square miles of scorched earth. On the radio, we hear that at least five people died trapped in their car. Soon the figure goes up to nine. Then 25. Then 48. Then 85 . Many more wounded. But there’s also good news in the middle of this apocalyptic scenery. A fireman cries as he remembers finding the woman whose body he was searching for alive, if covered in burns. 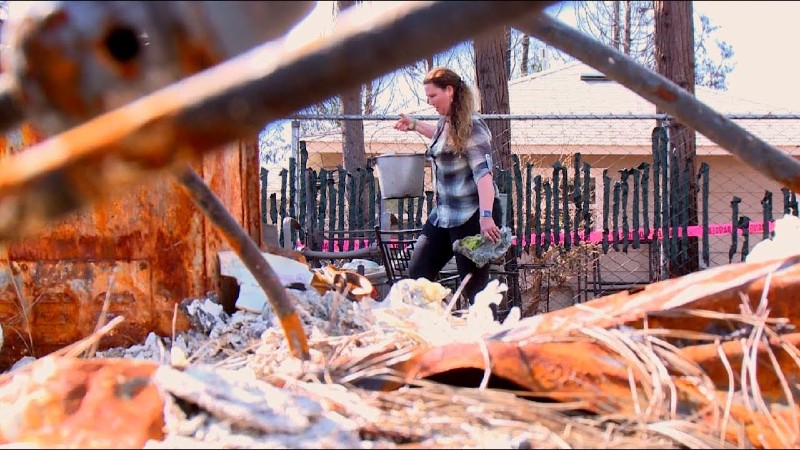 Fifteen minutes on, this 90-minute doc morphs into something completely different. Tens of thousands of people were displaced by the fire. Some lost absolutely everything. A woman displays a little cup, her only belonging spared by the flames. These people have to rebuild their lives from scratch. This reconstruction does not refer solely to the erection of a new home, but reclaiming a purpose in their lives, adapting an entire lifestyle. The movie becomes some sort of social documentary.

Residents scramble to move forward. “Who will pay for this”, asks an older woman. Frustration is pervasive: “Things are getting harder”. Fortunately, the community comes together in their struggle for reconstruction. A very emotional school graduation ceremony with cheerleaders et al is emblematic of their unity. The majority of these people are profoundly attached to Paradise, having lived there all or most of their lives. They are resilient. They wish to move on emotionally, but not geographically. They will not abandon their hometown.

The problem with the “social” part of this documentary and that it fails to delve into the stories of the residents in detail, instead focusing on the community as a whole. This broad-brush, fly-on-the-wall approach renders the story too impersonal, and also a little monotonous. Watching various group activities and countless teary residents without a more profound grasp of their individual predicament gets tiring after a while. The images of the fire at the beginning of the movie will stay with you for a while. Everything else afterwards, less so.

Rebuilding Paradise is in cinemas on Friday, September 25th.