"Filthy genius movie"
Tucci and Firth convince as a couple of advancing years coming to terms with a dementia diagnosis and the bleak event horizon that follows - on Sky Cinema and NOW on Saturday, January 22nd; also available on other platforms

Each of us carries a universe in our head. One hundred billion neurons, approximating the number of stars in the Milky Way. More important still are the connections between brain cells – a quadrillion synaptic junctions, more than the stars in the universe entire. For every node lost from this network, connections drop exponentially and this progression of dementia is masterfully conveyed at the open, with a far-off star going winking out from a crowded night sky, having gone Supernova. Lump in throat viewing follows – come prepared.

Tusker (Stanley Tucci) has received a diagnosis of dementia, causes and stage unknown. Things are definitely worsening, however, this simply won’t do for author Tusker, renowned for his intellectualism and lively personality. Concert pianist partner Sam (Colin Firth) is stoically resigned to tackle the coming challenges and is considering easy access bungalows or outside help. His heart is completely dedicated towards this new goal to spend their remaining time together. “Every moment”. The two are not entirely on the same page, with the sentimentality of Sam’s approach rubbing against the more clinical outlook of Tusker, railing at the inevitability of becoming a passenger in his own body. The diametrically opposed personal introspection of the writer against the sensitivity of an outwardly performative musician has until now defined their relationship, now causing friction.

If the balance of future sufferer/carer were to flow the other way, the film would definitely be less successful and Tucci and Firth inhabit habitual roles with career-best performances. Their easy mannerisms together convey their long and happy history, constantly tinged with the overhanging melancholy of the diagnosis. This in turn permits the pair deep wells of emotion to draw from as the film progresses. How the 35-year-old director Harry Macqueen manages to capture a relationship older than himself is impressive, as too are the framing of the dialogue scenes – perhaps skills picked up on the other side of the camera as an actor in the close sets of Eastenders? 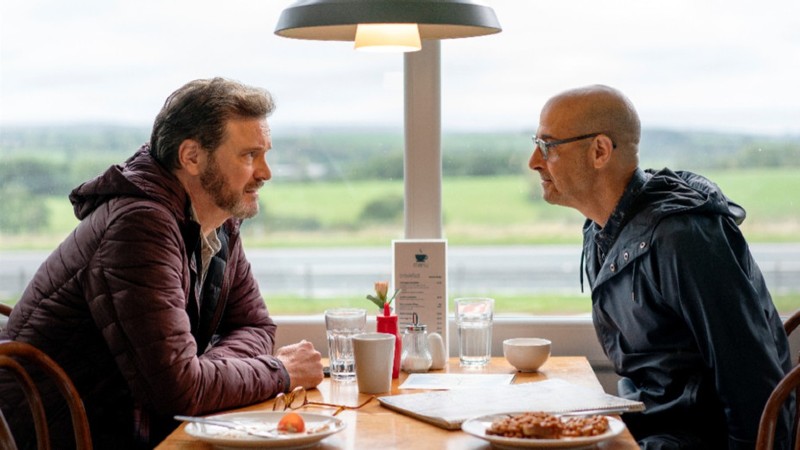 The narrative follows their campervan road trip through the countryside of North England, retracing old memories of roughing it lakeside. Their end goal is a piano recital designed to ease semi-retired Sam back into the game, via a pit stop at Sam’s childhood home where his sister and her family now reside. Not for want of trying, communication between the central pair is lacking in the face of this monolithic pressure. The communal scenes give them a chance to explore how they are handling the situation differently. Small moments with old friends and young nieces reveal Tusker’s acceptance of fate or Sam heart-wrenching terror that he can’t quite admit, even to himself.

Likewise, the passing of the van through the beautiful countryside makes thematic sense. Immense hills, rolling moors and proud mountains. At times oppressively large against the minute campervan, these will outlast us all, the film seems to say, together with frequent turns to the unknowable vastness of the stars above. There are three casualties on the horizon – Tusker, Sam and the life they have built together. Whether they can find the strength to weather the storm together, or apart, is the question.

Supernova premiered at the San Sebastian International Film Festival in September, when this piece was originally written. It is also part of the BFI London Film Festival in October. In cinemas on Friday, June 25th (2021). On Sky Cinema and NOW on Saturday, January 22nd (2022). Also available on other platforms.