"Greasy movie"
Deliberate pacing highlights quiet, charged moments of Lithuanian life under the shadow of Soviet years after the sun has set on the front lines of WW2 - Lithuanian drama premieres at San Sebastian

It starts as it means to go on. Terse, close conversations between the inhabitants of a farmhouse and establishing shots of a Lithuanian countryside that is the opposite of verdant. Sparse scrubland mirrors the fortunes of its inhabitants as the Soviet Union holds uneasy control of the territory. Landowner Pliauga ekes a living for his family, a formerly bourgeouis wife, brought low by the destructions of the war, and their impassive son, Unte. They have a comparatively privileged position, actively imperilled by the USSR soldiers that hold the town and are promising arable hectares to collaborators in line with their communist ideals. You can guess where this land is to come from.

Pliauga is a man of some contradictions. Urging Unte to pursue truth as holy, he nonetheless finds time for chaste kisses with housemaid Agne. Their land is worked by Ignas, an indentured servant with little pay beyond bed and board. Early on he invents a story of offering the man a parcel of his own which was turned down out of ‘laziness’. Yet, he is clearly not immune to the plight of the average Lithuanian man and supports a local rebel band of fighters who rail against annexation with midnight meals and carts of supplies.

This is foremost a story of rebellion. The battered partisan warriors inhabit a tattered camp in the forest, entirely reliant on the goodwill and closed lips of their neighbours. It is a far cry from the organised and successful resistance of the Viet Cong against their encroaching superpower enemy. Thin woodland of narrow trees cannot compare to dense jungle and the group is small by necessity, totalling six hardened men plus a too-young girl. Later, a single truck rolls into town bearing a contingent of Soviet soldiers three times as strong. In the face of the monolithic red army and Soviet Union, what plan can there be except to wait out the enemy. The withdrawal of troops was the prevailing school of thought, evidenced by radio transmission picked up from President Truman. Hindsight, eh? 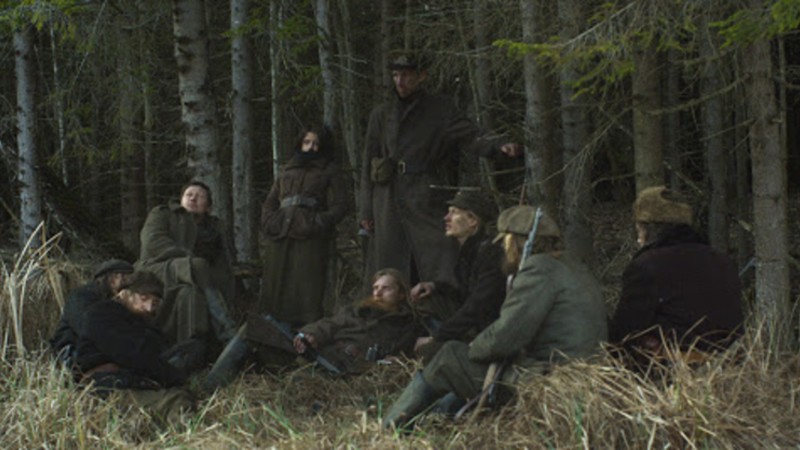 Unte moves freely between his home and their camp, to the consternation of his father. Having grown up in these conditions, Unte seems at a loss as to why people fight to their last and comes to an understanding far too late. The partisans have the authentic look of non-actors and are codenamed with monikers like Dollar or Boar – a small act of control rather than a fear of being outed. Where else have they to go? It is unclear if they have contact with a wider network or are possibly even the last node of resistance in the whole country.

In the West, the image of the Berlin wall is the most recognisable symbol of the Cold War – a brusque concrete bisection of the city and its peoples over the political machinations of the Soviet Union and the US. Yet, the wall was erected some 15-plus years after the end of WW2. Time in which the USSR consolidated its position through subjugation and terror. It’s easy to imagine that little to no footage of Lithuania escaped the blackout Iron Curtain in those years. Films like Sutemose can help illuminate Lithuanian history and contextualise the geopolitics of now, some 70 years on. However, it can be a slog; perhaps reflecting the drudgery faced by these outlaw partisans. The wheel turns to a flashpoint eventually but overall the film is long, deliberate, and light on exposition. Character motivations can seem unclear but the ambient storytelling gives all the right pieces – time taken to puzzle over Sutemose after a first viewing makes the experience more rewarding on reflection.

In the Dusk has just premiered at the San Sebastian International Film Festival:

One thought on “In the Dusk (Sutemose)”