"Greasy movie"
Written, directed and starred by Greta Bellamacina, this British indie illustrates the unlikely friendship between a poet and a babysitter against the backdrop of a London full of contrasts - in cinemas Friday, September 18th

The role of parents in personal development is impossible to escape. As such, it must have been difficult growing up with the absent father/narcissistic mother combination that single mother and aspirant poet Celeste has been burdened with. The influence, or lack thereof, of these totemic figures on her upbringing is keenly felt well into her late 20s, with the title of the film referring to her latest collection of poetry dedicated to said father and her perennial search through the phonebook for him.

Executed wrongly, this characterisation of London-based Celeste might land in pitiable territory but there is a certain resilience brought to the role by writer-director-actor Greta Bellamacina. In the face of literary rejection from publishers and acquaintances alike, she plods forward on the path of her own making. Her son, Jimi, is never portrayed as a burden and instead a source of succor. Likewise, the fact of her own partner abandoning the pair, a cyclical event that was surely formative in it’s own right, is mentioned in passing but never leant on for excessive pathos. This willingness to bring themes into the conversation without drawing outright conclusions on behalf of the viewer is used to great effect throughout the film.

It is Celeste’s story that drives most of the narrative but the film is actually a two-hander. Dippy but earnest best friend-cum-babysitter Stella (co-writer Sadie Brown) acting the foil. Her story is at turns sweet and tragic, her own career hangover from the theatre serving as a warning from the ghost of art future. The friendship of Celeste and Stella provides the meat of the plot-light tale, with both characters searching for a measure of success or expression that they can wholly own. This culminates in a frankly bizarre third act that rescues the film from disappearing entirely into well-trodden mumblecore mires. 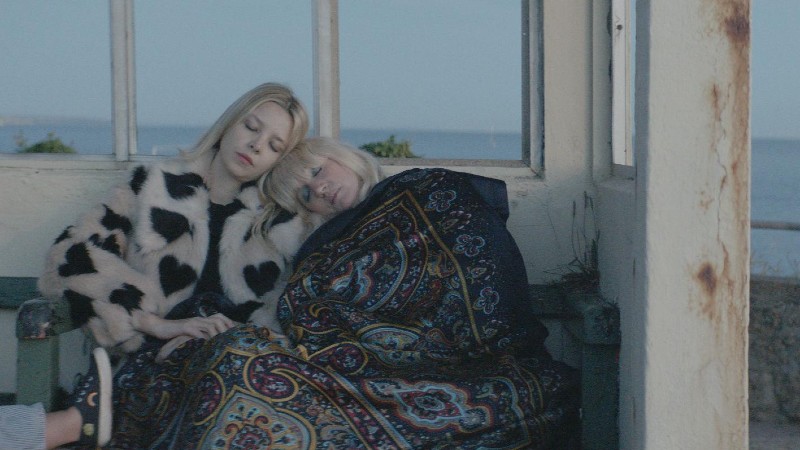 Set in Margate, kooky locals provide some much needed colour to proceedings and the scenes are reminiscent of the weirder parts of cult classic Withnail and I (Bruce Robinson, 1987). Prior to this, a revolving door of secondary characters punctuate small exchanges designed to draw out the traits and motivations of Celeste. Owing to the proudly small budget, these roles are taken by model friends of Bellamacina, presumably taking part as freebies. Classmates, family members, waitresses, fortune tellers – these appearances have a more improvisational feel, with lacklustre acting and dialogue that needs finessing. There are a few great lines in the script but not quite enough to carry such a literary-focused feature.

A more impactful character is presented by the London capital itself, with a feast of beautifully shot vignettes showing street corners, leafy squares, pubs and barbershops. There is a nice juxtaposition of picturebook London against the modern reality of increasingly decrepit high streets, inflected by character worries of finances, Brexit and an under-funded NHS. A soundtrack that alternates gentle indie tracks with dream lounge piano underpins these transitions to gentle effect, like so much else in the movie. It’s always appreciated to see a more realistic showing of the London property market on the big screen. That said, a well-mannered black cab driver is egregious.

At the end of the day, mileage with Hurt by Paradise will vary depending on your tolerance for the central figure of a well spoken middle-class white girl espousing her poetry in voice overs. However, if this description turns you off, then you’re probably the target audience as the knee-jerk reaction of the general public to recoil from the individual sincerity represented in a person’s poetry is perhaps the major theme at play. As a published poet herself, Bellamacina strives here to understand where the sentiment originates from. Allusions to Sylvia Plath and the posthumous success of artists question whether this has always been the case.

Elsewise, a party sequence displays some delectably dislikeable arthouse hipsters on the one side, whilst dismissive or laddish publisher execs pop up on the other side of the pretentious expression – commercialisation axis, typifying the problems with modern day artistry. Celeste’s quiet self-belief in the face of these cultural challenges is necessary to carry the argument but leaves Bellamacina without a chance to really change the tempo, leaving her story feeling unfinished. Future instalments to follow up Celeste’s progress in real-time, à la Richard Linklater’s Before trilogy, would not go amiss in an effort to see the conversation develop.

Hurt by Paradise is out in cinemas on Friday, September 18th.