"Greasy movie"
Documentary follows Greta Thunberg from her lonely "school strike" days in mid-2018 up until her trip across the Atlantic to attend the New York Climate Change Summit last September; what she achieved in little over a year is truly astounding - On Disney + UK on Friday, July 22nd; also available on other VoD platforms

Born in January 2003, Greta was just 15 when she started a lonely “strike” outside the Swedish parliament in the summer of 2018. She wasn’t famous, and there were no “manipulating” parents telling her what to do. This was entirely her initiative. For weeks, she held a sign saying “Skolstrejk för klimatet” (“school strike for climate”). At first, very few people engaged with her (no more than three adults in a day), but soon other young people joined her protest. She was consequently invited to attend a climate change event in Katowice (Poland), where she received worldwide attention and became a global hero virtually overnight. One swallow does make a summer, after all.

Remarkably, the documentarist started filming Greta without the knowledge that she would quickly become a world-famous icon.

Greta revolutionised both the world and her personal life. On one hand, she inspired people of all ages. On the other hand, the once highly introspective girl (who did not talk to anyone outside her immediate family for three years) would suddenly deliver lengthy, passionate speeches to crowds everywhere in the world, thereby smiling and breaking away from her world of personal isolation. She met world leaders (Emmanuel Macron being the first of them), the Pope and delivered televised speeches at the EU and the UN. Her commitment to the environment remained steadfast. In fact, she remains very critical of those whom she met, consistently accusing them of hypocrisy, inaction and complacence. She removed her headphones while the President of the European Commission Jean-Claude Juncker delivered a speech because she felt that she was being used as a political symbol. She believes that the world leaders behave like kids, that they have failed our planet, and it’s therefore time for the children to take the matter into their own hands.

In the end of the movie, we join Greta and her father as they sail across the Atlantic in order to join the Climate Change Summit at the UN Headquarters in New York. “This feels like a dream, or a movie”, she sums it up as the waves hit the racing yacht. The voyage took nearly three weeks to complete. She received a rapturous welcome upon reaching the other side of the pond. 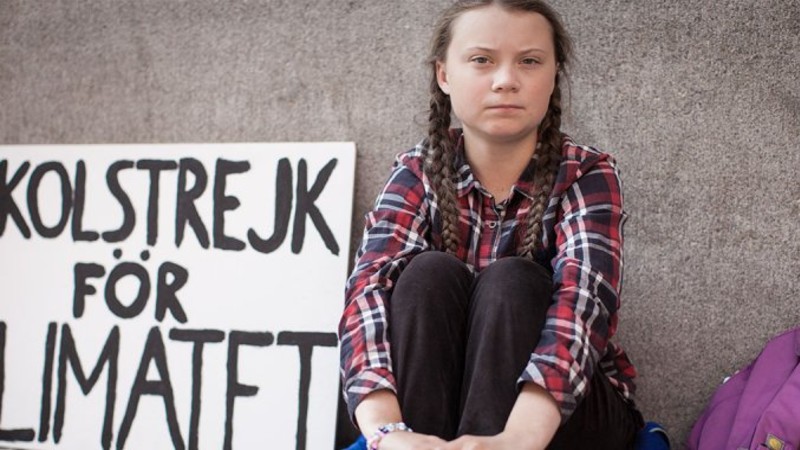 The young activist’s rhetoric is concise and urgent: “this is not about going vegan once a week, this is a real crisis”. She argues that we are in the middle of the sixth mass extinction, at a tipping point for the planet. Her resilience and her determination are inspiring. She looks entirely unaffected by her critics, and even guffaws at some of them. They include Fox News, Vladimir Putin and far-right leaders such as Donald Trump and Jair Bolsonaro (all featured in the movie). They see her as a “brat” manipulated by unscrupulous parents and being used to serve a very questionable agenda. She is described as a “mentally ill”, in reference to her Asperger’s Syndrome. She challenges a reporter: “I don’t suffer from Asperger’s. I just have it“.

Overall, I Am Greta is an observational, fly-on-the-wall type of documentary. It never challenges its subject. Instead, it paints an intimate portrait of a fascinating human being. Greta is always supported by her doting father Svante. There is little doubt that she is the one in charge, taking all the decisions. Her mother Malena is only briefly featured in the movie: there is only one brief personal interaction while baking a cake. Malena is a famous opera singer in Sweden (she once represented her country in Eurovision) and her near-absence in this documentary might raise a few eyebrows.

The biggest problem with I Am Greta and that it falls into one of the trappings that it set out to avoid. Critics accuse Greta of being too broad and repetitive, devoid of concrete proposals. Her father explains that she learns the facts in a book almost automatically, and that she knows more about the environment than “97% of politicians in the world”. While I am satisfied that Greta does a very important job is appealing to people’s emotions, I would like to learn more about her propositions. What are the facts and figures, and are there any targets? “The future of the planet is at stake” and “we need to act now” are statements way too vague. Ultimately, I Am Greta fails to qualify action.

I Am Greta premiered at the 77th Venice International Film Festival in September, when this piece was originally written. It is out in cinemas on Friday, October 16th. On Disney + UK on Friday, July 22nd (2022). Also available on various other platforms.