"Greasy movie"
Bill and Ted have grown up. So, too, have audience sensibilities. Is there still an appetite for their medium-brow escapades? On Sky Cinema and NOW on Friday, July 2nd

The fall and fall of William S. “Bill” Preston, Esq and Ted “Theodore” Logan sets the stage for Bill & Ted Face the Music. Reduced to playing open mic nights and the weddings of family members, their search for the ‘song that will unite the world’ has foundered on increasingly esoteric musical shores, to the point where the timeline itself is jeopardised. A very literal deadline accelerates matters and the pair decide to travel forwards in time to when the song is already written, resulting in HIJINKS. The titular pair are played the same as ever but this is an easier rhythm to fall back into for Alex Winter, who has mostly ditched acting for directing and voice-overs through the intervening years.

Alternately, the mountainous filmography of Keanu Reeves puts a lot more space between him and Ted, here pitching for the gangly awkwardness that came naturally in his youth but now feels off. Their stoneresque patter is unchanged and there is fun to be had seeing their arrested development writ large well into middle age. Winter and Reeves also get more to play with as their older egos in the journey of future-self discovery. Narratively, the more distance between B&T and the original films, the worse for their life, interpersonal relations and the security of the timeline itself. Irony intended?

Screentime is split fairly evenly between Bill, Ted and their carbon copy scions – Theodora “Thea” Preston and Wilhelmina “Billie” Logan, played by Samara Weaving and Brigette Lundy-Paine, respectively. The two generations diverge early and little B&T instead search the past to assemble a musical supergroup to help their dads with the quest. Despite their plot mirroring that of the original films, the girls bring a slightly different vibe in that their music acumen is most impressive, dude. They are portrayed with a genuine interest in music theory and classicist influences whilst B&T themselves always seemed shallow on that front. The actresses also do a great job with what they’re given. The physical commitment to the goofy mannerisms of original B&T is achieved to great effect and is kind of magnetic. The career trajectories of these two stars are ones to watch. Weaving in particular had a memorable turn in Three Billboards Outside Ebbing, Missouri (Martin MacDonagh, 2017) and fronted last year’s comedy horror Ready or Not (Matt Bettinelli-Olpin, Tyler Gillett) to quiet fanfare. 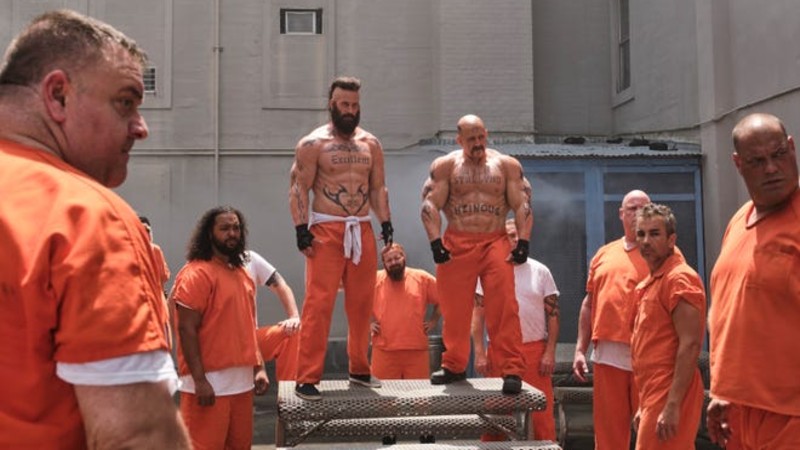 From Anchorman 2 (Adam McKay, 2013) to Zoolander 2 (Ben Stiller, 2016), why the fascination with belated sequels some 10-plus years after the fact? These kinds of film arrive with too much baggage to ever shine on their own. References to half-remembered jokes made some 30 years ago don’t really land. At least Bill & Ted avoids the self-serving overcameofication of other outings in this unfortunate genre. Kid Cudi recurs with comical bonafide moments as a quantum physicist and appropriate tribute is paid to the memory of George Carlin. That’s (almost) it. It’s the newer stuff, represented by the daughters, where the film can do anything remotely resembling the breaking of fresh ground. Their mothers, the princess wives, also have their own time travel thing going on but this plot is so tertiary and light on details as to be almost absent from the film.

Productionwise, it almost goes without saying that there’s not much to be said for the cinematography. Visual effects and costumes for the different eras are fine. Don’t look for any cohesion to the machinations of the time travelling plot. The more remarkable elements are probably the original songs which are fun enough to carry the plot to its finale. It can’t be an easy job to devise ‘a song that unites the world’, hence the entire plot of the film, and music director Mark Isham should be praised for an end result that is fairly convincing. An early attempt, entitled “That Which Binds Us Through Time: The Chemical, Physical and Biological Nature of Love; an Exploration of The Meaning of Meaning, Part 1”, comes complete with throat singing, theramin and bagpipes. Other characters abhor it but it’s actually kind of great.

It’s fun enough that the film manages to avoid total redundancy, giving more laughs than some out-and-out comedies of recent times. Nonetheless, it’s tough to shift that sense of retreading old ground. It’s easy to forget just how big of a property Bill & Ted was in the ’90s, with live-action and animated TV series, comics, video games, cereal. Yet, after three decades, is anyone truly clamouring for Bill & Ted 3? Early VoD figures suggest so, but the factor of an audience captive at home shouldn’t be discounted. That said, it is mulish to begrudge the comfort food of Bill & Ted 3 in these trying times and the central message to “be excellent to each other” is always welcome.

Bill & Ted Face the Music is in cinemas on Wednesday, September 16th. On Sky Cinema and NOW on Friday, July 2nd. Also available on other platforms.