"Greasy movie"
Pedro Almodovar toys with language in featurette adapted from a monodrama by Jean Cocteau, and with Tilda Swinton at the helm - on Mubi on Friday, July 23rd

Breaking up with your ex is never an easy task, particularly when he’s already found a new companion. He hasn’t returned home for three days, in a rather unambiguous sign that he has now left for good. You experience a lot of feelings: despondency, jealousy, hate and – first and foremost – rage. You want to stab his chest. You want to cut him up with an axe. You want to set fire to what once was your love nest.

Can you live out these things for real? Probably not a good idea. So the 70-year-old Spanish filmmaker found a cunning solution. He staged the entire action. He built a mock home inside a large warehouse and hired Tilda Swinton to play the jilted lover. She is supported by her doting pooch Dash, dazzling costumes and a jaunty music score by Alberto Iglesias.

Almodovar’s latest movie places a 1928 play by Jean Cocteau in a modern context. Tilda Swinton’s character is surrounded by plush green walls, vibrant furniture, paintings and various art pieces. She is literally dressed to kill, in scarlet red. But what’s most remarkable about the film is how Almodovar opts to expose the cinematic apparatus. Aerial shots reveal that the action takes place inside a film set, in a way vaguely reminiscent of Lars von Trier’s 2003 Dogville (except that the walls are indeed standing, and not merely painted to the ground). 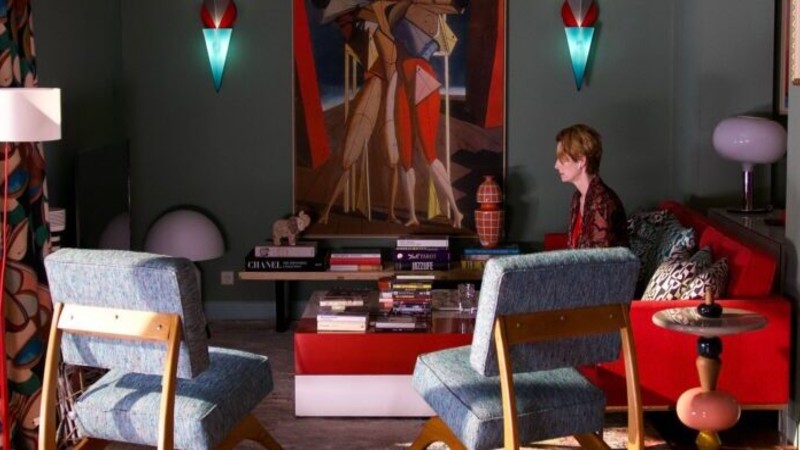 When Tilda’s character speaks to her lover on the telephone, human voice at the other end of the telephone line is never to be heard, not even faintly, emphasising the theatrical nature of the film. Both Tilda and her character are aware that this is all staged action. In fact, the filmic antics overshadow the narrative.

This is not the first time that Almodovar plays with metalanguage. His previous film, the feature Pain and Glory (2019) also foregrounds the filmmaking device. The difference is that here he does it from the very beginning, while in last year’s movie he leaves the clever ruse for a major twist at the very end. The Human Voice obviously has limited commercial ambitions – a 30-minute featurette does not tend to get theatrical distribution -, allowing the filmmaker more artistic freedoms. Or perhaps he’s rehearsing for a more radical experiment in the years to come.

The Human Voice premiered at the 77th Venice International Film Festival, when this piece was originally written. It showed in October at the 64th BFI London Film Festival. It was out in cinemas (featuring a Q&A with Pedro Almodovar and Tilda Swinton, hosted by Mark Kermode) on Wednesday, May 21st. On Mubi on Friday, July 23rd. Also available on other VoD platforms.

Watch the trailer for Almodovar's latest drama, a very personal drama about the very nature of filmmaking [Read More...]