"Dirty gem"
A desperate Bosnian mother and wife scrambles to save her male relatives from a seemingly inevitable death in Srebrenica - on VoD on Monday, March 22nd

The year is 1995 and the place is Sebrenica, the Bosnian municipality that became home to the biggest genocide in Europe since WW2. In total, 8,372 boys and men were killed. The schoolteacher Aida (Jasna Đuricic) works as an interpreter for the UN. The intergovernmental organisation is charge of the town, located in the Republika Srpska entity, and now surrounded by Chetniks (Serbian soldiers) under the purview of military commander Ratko Mladic. The UN insists that the town is a “safe zone” and that the Serbs will suffer “very serious consequences” in case they attack. The reality couldn’t be more different.

A large number of civilians find shelter inside the UN facilities, but an even larger number are left outside, including Aida’s husband and two sons. The atmosphere is very tense both inside and outside. Thousands of people fear for their lives, without food, drink or even a place to urinate. A woman announces that her waters broke. UN soldiers with no medical qualifications assist her at giving birth. And that’s just the beginning of the tragedy.

UN protection becomes elusive. It seems increasingly inevitable that the Serbian forces will take over the increasingly vulnerable city. Having already defeated the Bosnian army, Mladic holds all the cards. At one point, armed Chetniks enter the UN facilities in order to check whether any of the civilians hold weapons. Helpless UN officers have little choice but to watch in silence. Serbian television follows the action. Mladic is happy to pose as a national hero for the cameras. While being filmed, he pretends to be kind and generous to the Bosnians. The Chetniks behave like pigs, intimidating and humiliating at Bosnians – particularly the Bosniaks (Bosnian Muslims) – at every given opportunity.

Aida senses that a tragic fate will befall those left in the hands of the enemy. She eventually manages to smuggle her husband and children into the complex, under the excuse that her husband will facilitate negotiations with the Serbs. But her family don’t have permission to stay with the UN for very long. A frantic Aida comes up with every conceivable plan in order to protect them, ranging from fake IDs to hiding amidst large boxes in the back of a lorry. But nothing seems to work. Will her male relatives eventually have to join the large crowds and become victims of systemic shootings about to unfold? 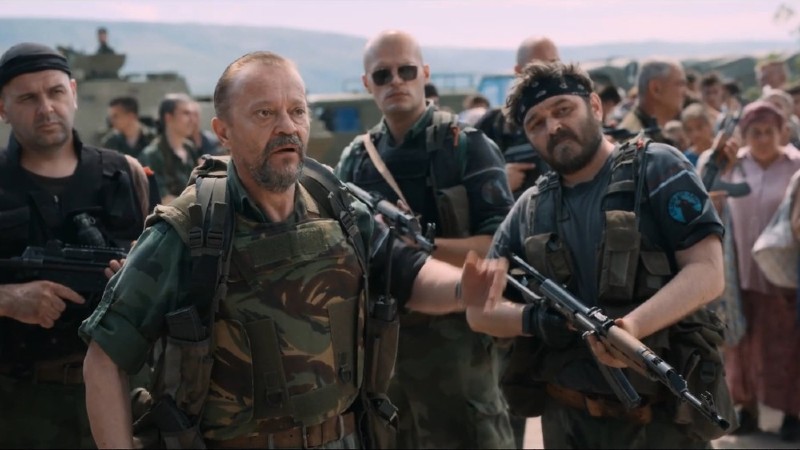 In one of the most shocking sequences, boys and men enter a room (not dissimilar to gas chambers), only to be sprayed with rifle bullets. In another sequence, women identify the remains of their male relatives, after their bodies were exhumed from one of the numerous common graves years later. The tone is sombre and realistic. Violence is neither fetishised nor sanitised.

On her 14th movie, Jasmila Zbanic returns to the topic of frantic motherhood, which catapulted her to fame in 2006, when she won the Golden Bear for Grbavica. In both movies, a Bosnian mother is desperately trying to protect her family. In Grbavica, Esma attempts to shield her teenage daughter from a very painful truth through silence: she simply refuses to reveal who her real father was. In Quo Vadis, Aida, the protagonist is very loud and vocal about her intentions: she screams, kicks up a fuss and demands that her male relatives are protected by the UN. In both films, Serbians are directly responsible for their agonising pain of the female protagonist.

While not as powerful as Grbavica (one of my personal favourite films of all times, so much that the movie title is tattooed directly above my heart), Zbanic’s latest film is one that will haunt you for some time. It reveals that the wounds of genocide never heal. Aida returns to Sebrenica years later to pick up the pieces from her past, and it all comes full circle when she bumps into one of her tormentors on the staircase of what used to be her apartment.

Twenty-five years later, Bosnian mothers, wives, sisters, grandmothers, aunts and cousins of Srebrenica are still coming to terms with the deaths of their male relatives. And the 45-year-old Bosnian filmmaker has firmly established herself not only as the voice of Bosnian mothers, but also as an international representative of her young and tormented nation.

Quo Vadis, Aida premiered in Competition at the 77th Venice International Film Festival, when this piece was originally written. It’s on the major VoD platforms from Monday, March 22nd.