"Dirty gem"
Aki Omoshaybi's debut feature essays a young British couple shaping up their lives, in the mould of their partner's image, but are they truthful to each other? In cinemas Friday, September 11th

This is a film of vast ambition and bold humanity, focusing on the collective failings that exist within working class England. It flits from the artful to the authentic, with palatable, passionate strokes. At one corner are the fruitful outings of a mother eager to maintain the love of her only child; at the other sits a sartorial suitor who has barely progressed from the confines of childhood. There is more. Director Aki Omoshaybi creates a new spin on the romantic genre, showing the agonies of love from both a male and female perspective.

We first see a man, dressed so lucidly and elegantly in a dinner jacket, offering to spot a lady’s groceries. Their eyes meet, and so the duo exchange names. Kyle (the natty Omoshaybi) finds Jamie (Pippa Bennett-Warner) enigmatic, accepting her sense of dress as a sense of her place in the world. Except it isn’t. She is a struggling, single parent, barely able to feed her boy the Coco ops she so steadfastly promised him. She sees in Kyle the security robbed from her life, and aches to take him to the fractures derived from one too many a jilted lover.

Failure hangs in many frames, as each character dwells on their foibles in their deepest, darkest moments. Kyle, eager to whisk his betrothed to be, invites Jamie out for a romantic rendezvous. “I know it’s stupid,” Jamie tells him, sipping the remnants of a wine she knows she can’t afford: “I don’t want to be judged for what I do.” 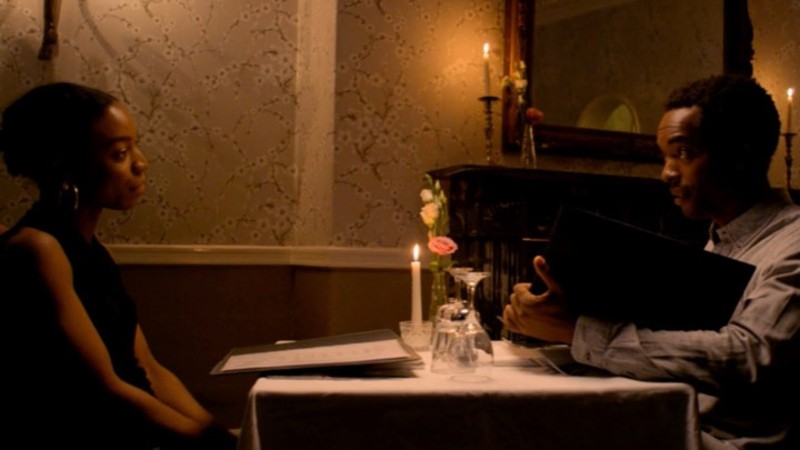 Neither, it seems, does he, but he’s unwilling to admit to that. Indeed, the only way we sense his inner frustrations are through his mother, the one woman who holds greater power over Kyle. Finding his impish, prevaricatory approach to life problematic, she inevitably throws Kyle out of his childhood home when she discovers that he’s borrowed her car imprudently. Daring as ever, Kyle takes this rejection as he does the many others that come his way; stylishly. He flaunts around in immaculate wear and tear, those tidy jackets sitting so comfortably on his shoulders, not one button under pressure. What follows is some of Omoshaybi’s finest, rawest work to date, as he awaits the laceration that he has waited too long to receive.

The beauty of Real is how it shows the female protagonist’s courage without dwelling on it, fashioning a performance that could only come from a place of honesty. Everywhere we go, there are telltale signs pointing to our lives within the lives of those who inhabit this version of Portsmouth. And as it is with every aspect of life, the characters carry on with brill, British resolve, eager to make it to their proverbial finish line, without embarrassing themselves too much along the way. That both do it so stylishly, and with such excellent taste in clothes, only helps to sell the emotion.

Real is in cinemas on Friday, September 11th.