The Roads Not Taken

"Greasy movie"
Javier Bardem stars as a man suffering from advanced dementia, and attempting to puzzle together the fragments of his past - now available on VoD

British director Sally Potter, supported by both the BFI and BBC Films, crossed the pond and the Channel in order to make her latest feature, a drama set between New York, Mexico and Greece. The cast is entirely non-British, as is the story, which was penned by the 71-year-old London-born and raised helmer.

Leo (Jarvier Bardem) lives in a shabby New York flat facing the railway. He barely speaks and is unable to carry out menial tasks. A carer looks after him. One day, his daughter Molly (Elle Fanning) shows up in order to take him to the dentist and optometrist. What should have been an easy and straightforward journey turns into a Herculean task, as Leo is unable to understand basic commands (such as opening his mouth and keeping his head still). His behaviour is increasingly erratic and unpredictable: he jumps off a moving car, and wanders off aimlessly barefoot.

Molly is trying to reconnect with a father that she barely knew. Leo left her as a baby because he could not reconcile fatherhood with his career as a writer. The young woman’s attempts to bond with a father who isn’t entirely there are genuinely emotional. It’s never entirely clear what Leo suffers from, but the symptoms suggest early onset Alzheimer’s. In fact, Molly never verbalises that his father is mentally impaired, speaking in euphemisms instead: “Can’t you see he’s now well?”. As a result, people often assume that Leo’s just a dangerous crook, landing him in hot water more times than one.

Parallel to his mental twilight in New York, we see Leo in Mexico with his partner Dolores (Salma Hayek) mourning the death of his son, presumably a few years earlier. We also watch him on a Greek island attempting to write and to make sense of the mistakes of his youth (such as abandoning Molly). That’s where the first symptoms of the malaise begin to show: Leo inexplicably collapses in front of two young women, about the age of his daughter. 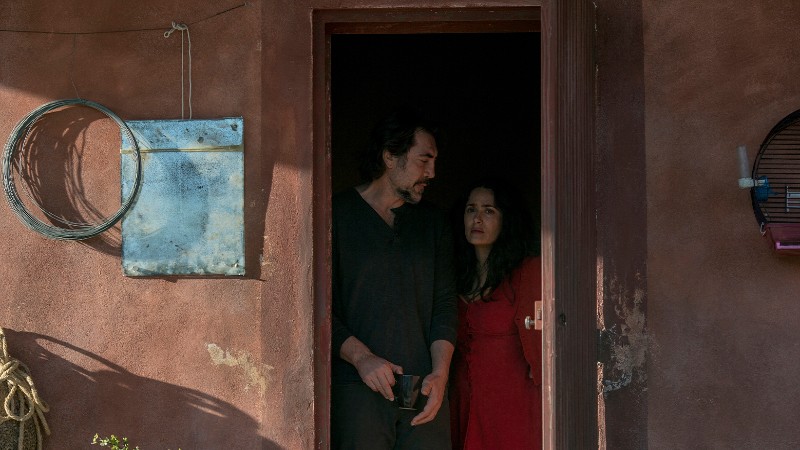 The present-day, ill version of Leo has very short episodes of lucidity. His ailing mind is constantly attempt to reconstruct the past, but the outcome is often disastrous. He murmurs words and names, but is rarely able to string a coherent sentence together. He hugs a stranger’s dog assuming that it’s his beloved pooch Nestor, which has been dead for some time. Security are called upon him, as the animal’s owner assumes that Leo is trying to kidnap her pet.

Sally Potter’s ninth feature (and the second one to premiere in Competition at the Berlinale in just four years (after 2017’s disappointing The Party) has very convincing performances from its three leads, Bardem, Fanning and Hayek. But it’s often shallow and oversimplified. The relationship and the chemistry between Bardem’s and Hayek’s characters could have been explored in a lot more detail. The only connection examined in detail is the one between father and daughter. The many subplots have a lot of loose ends (such as Leo’s professional career, his son with Dolores, and so on). The narrative is as fragmented as Leo mind. This was likely an intentional creative choice, yet not entirely effective. This relatively short movie (with a duration of just 85 minutes) would have benefited from more character development for the secondary personages. As a consequence, The Roads Not Taken fails to achieve its full potential, and to move viewers more profoundly. Not an unpleasant ride, but Potter should have taken us all the way down the road.

The Roads Not Taken premiered in Competition at the 70th Berlin International Film Festival, when this piece was originally written. It is out in cinemas on Friday, September 11th. On VoD on Friday, January 11th.