True History Of The Kelly Gang

"Dirty gem"
George McKay shines as the feral Australian outlaw in this divisive and dirty fact-bending nightmare - on VoD on Monday, June 22nd.

In his fourth feature, director Justin Kurzel has plunged Antipodean folklore into a hellscape reminiscent of Hieronymus Bosch, creating a harsh, barren experience that is surreal yet acutely human.

Anyone expecting a history lesson will be disappointed by the opening announcement “nothing you are about to see is true”. After all, Ned Kelly is to Australia what Rasputin is to Russia – a figure of mythical proportions. Adapting Peter Carey’s 2001 novel, screenwriter Shaun Grant uses this line to fix a postmodern filter on all that follows, commenting on the distortions and controversies of Kelly’s legacy.

We are introduced to Ned Kelly as a boy (Orlando Schwerdt) living in a charred wasteland with his cruelly dysfunctional family, led by venomous matriarch Ellen Kelly (Essie Davis). They are at the mercy of local authority figures in this quasi-lawless land, the latest being Sergeant O’Neill (Charlie Hunnam), a smug cavalryman who uses Ellen for sex. 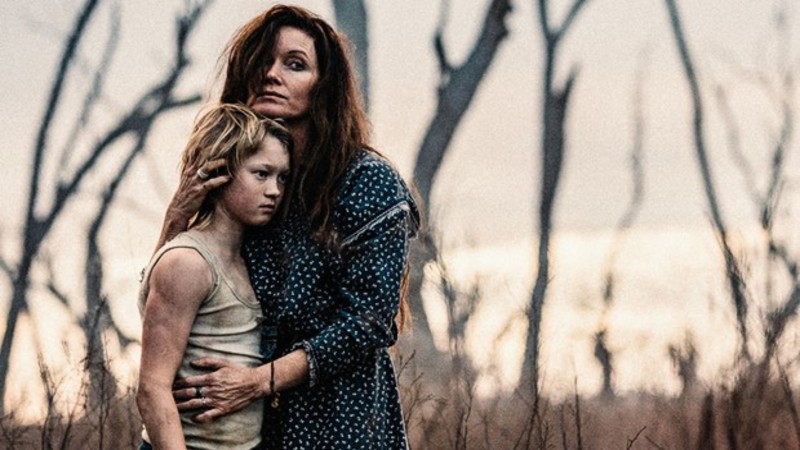 However, he is soon replaced by Harry Power (Russell Crowe), a gruff, charismatic bushranger with a dubious appetite for violence. Building upon the anger and poison of the family dynamic, Power takes Kelly under his wing, imbuing him with a foul-mouthed contempt for authority – British authority – and familiarising him with weapons, torture and murder.

The depiction of Kelly’s formative years breathes humanity into that steely mugshot known by many an Australian. Young and ingenuous, we see him beguiled by his own mother that to be a man is to main and kill. He is shown to be a victim moulded not so much by the imperial bogeyman of legend but his own family. Whether this vulnerability is accurate is almost incidental because it’s a convincing, compelling yarn.

But make no mistake, there is some real British nastiness here. As Constable Fitzpatrick, Nicholas Hoult thrives in the role of pompous imperial bastard, giving an almost Alan Rickman level of villainy. In this respect, Kurzel very much feeds into the Kelly myth and it’s some of the best stuff in the film.

But all of that patrician arrogance cannot restrain George McKay’s snarling, physical turn as Kelly. As lean and vicious as a wild dog, Kelly leads his troupe of cross-dressing anarchists into frenzied oblivion. Yet despite all his grit and fury, there is that wounded humanity to this character.

Kurzel’s film, then, is a curious biopic; it at once subverts and supports the legend of its source material with a post-modern veneer of ambiguity and harsh, sensory aesthetics. It’s divisive but dirty.

True History Of The Kelly Gang is in cinemas on Friday, February 28th. On VoD on Monday, June 22nd.