"Filthy genius movie"
Jacques Demy's magnificent and extremely original musical returns to cinemas nearly six decades after its original release; our writer Patricia Cook compares her viewing experience in the 1960s with the present - out on Friday, December 6th

The BFI are featuring a season of musicals on film which continues to January 2020. One immediately thinks of the great Ginger Roger/ Fred Astaire song and dance Hollywood musicals of the 1930s. These were followed by those of the 1940s and 1950s dominated by Gene Kelly who worked so successfully with Stanley Donen to create a series of outstanding movies – On the Town (1949), and Singing in the Rain (1952) among them.

However, there is a lesser known gem of the French cinema in The Umbrellas of Cherbourg directed by Jacques Demy, a director associated with the French New Wave. It was released in 1964 and won the Palme d’Or at Cannes in the same year. Now, after all these years, it is still distinguished by all the dialogue being sung by the characters. The film was the joint creation of Demy as director and Michel Legrand. The sung dialogue seamlessly unfolded the poignant tale of the course of young love. The combination of sung dialogue and beautiful backgrounds lends itself to creating an unique nostalgic quality; the theme tune is haunting and reflects the tone of the bitter sweet relationship between the lovers. 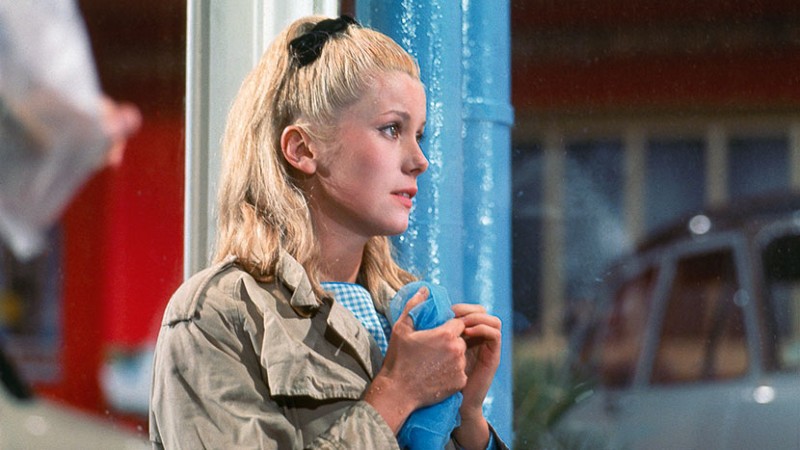 I saw The Umbrellas of Chebourg when it first came out in the 1960s. It contrasted completely with the song and dance musicals produced by Hollywood which were fast and full of movement. However, so much was changing with the French New Wave, one just enjoyed the originality of the sung dialogue and the provincial setting of the story. It was a departure from what one was used to but a delightful glimpse into French culture. Seeing it now, one is almost overwhelmed by the colour, the carefully co-ordinated and constructed interiors and the realistic filming in dark, wet cobbled streets. It still retains a magical quality with something of a fairy tale in its gorgeous use of coordinated colour, the simplicity of the story and the haunting melodies.

Earlier in 1961 Demy had directed another now almost forgotten film, Lola, which was much appreciated at the time with Anouk Aimée as the central character. For those interested in film, it provides an excellent preparation for The Umbrellas – the music shares certain themes as does the story and provides a link to the back story of the diamond merchant in The Umbrellas of Cherbourg.

Demy supports the sequence of events by dividing the narrative into three parts starting with Departure, followed by Absence with the concluding Return. The story begins with an engaging young couple, Guy and Geneviève who are very much in love. Their total absorption with each other adds a new dimension to their mundane lives; each living with family in a port seemingly largely populated by French sailors. The hoped for future of marriage with children is disrupted by Guy being drafted to serve abroad in the army for two years. 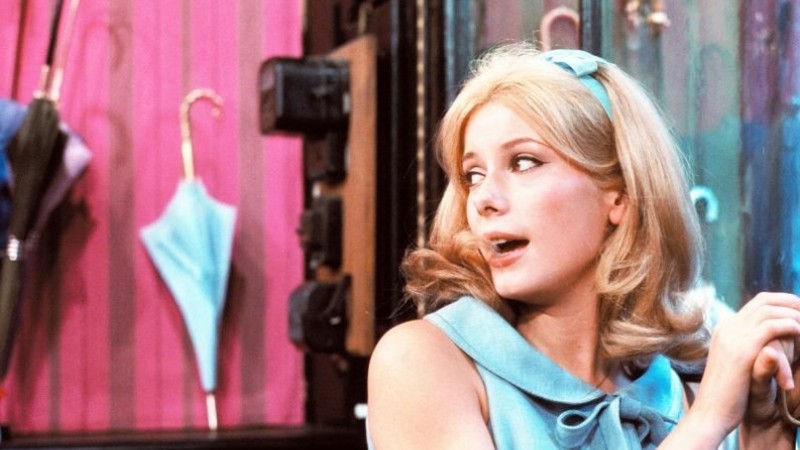 While the story line is very much of its period – a couple separated by the Algerian War, with the forlorn girl facing pregnancy without the face-saving possibility of marriage and its economic security – the poignancy of the situation is as powerful as ever. Geneviève’s predicament is beautifully realised with her gradual recognition of the difficulty of sustaining a powerful relationship at a distance.

The final part depicts the challenges experienced by Guy on his return to Cherbourg as a veteran of the war in Algeria. While reflecting on his earlier life with Geneviève, he gradually realises he needs to establish a new life for himself. Rain sunshine and snow all reflect the mood of the characters. Many images and themes are repeated – the Mercedes car brings Geneviève back to Cherbourg where there is a bitter sweet reunion. Not a Hollywood happy ever after resolution but perhaps one with which we can all recognise and identify.

It is stunning to see the beautiful Catherine Deneuve as a 20-year-old at the beginning of a lifelong career. The supporting actors are equally strong in conveying the poignancy of the situation and the working port of Cherbourg creates the gritty realism of every-day life. Much to be recommended – a truly memorable film.

The Umbrellas of Cherbourg is back in cinemas on Friday, December 6th

The dirty movie that changed my life: The Umbrellas of Cherbourg

Our reader Karin Thimm describes the very film and the very sequence that gave her a renewed sense of purpose in life, after an acrimonious divorce battle at the age of just 20! [Read More...]

Dance me to the end of love!

Our editor Victor Fraga shares the five songs that got the both film characters and his heart dancing, changing the way he sees cinema and the world forever! [Read More...]