The devastating effects of gentrification are meticulously observed in documentary The Street, a scathing indictment of Tory austerity over the past four years. An empathetic portrait of a community in flux, it doubles up as a wide-spanning lament for a country that has seemingly lost its way.

The Street keeps things very local, maintaining all its action across one street in Hackney. It makes sense: London has always been a city of villages. You can still feel the distinct characters of certain districts as they flow into each other, blending contrasting architectural styles, eras and social types. Hoxton Street is one such village— located only one mile from the City of London, its characterised by its authentic East London feel. Yet with increasing monoculture on the rise, caused by the influx of the monied middle-classes, the street is in danger of losing any of its original authentic character.

It starts off pretty bleak. Nearly all the pubs are closed. Replaced by cafes. Garages, replaced by flats. Authentic eateries, replaced by craft beer bars. Only a few places hang on: an old garage sandwiched between two housing developments; a meat and pie shop that’s been in business for several generations; and a traditional bakery selling gingerbread men and apple tarts for a handful of change. 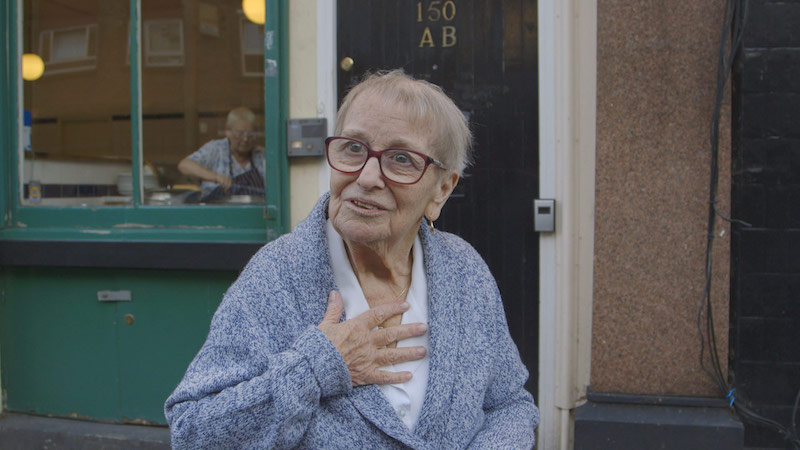 Photographer turned filmmaker Zed Nelson is a great listener, inserting himself when he needs to but rarely asking questions with a particularly pointed agenda. We talk to Octogenarian Coleen reminiscing about her lost loves; an Anglican priest about to lose his home when he’s forced to retire at 70; a homeless man living under a bridge. Nelson lets these locals speak more or less for themselves, explaining their sad situation and how rampant capitalism is making their lives increasingly more difficult.

But he’s also smart enough not to paint anyone’s struggle in simple black-and-white — and to simply take the word of the locals as the final point on the matter — creating a complex picture of both locals and those moving in. While some of the gentrifiers hang themselves with the rope they’re given (one barista calls Hoxton a “shithole”), other affluent immigrants are far more complex. An owner of an art gallery seems pretty attuned to the plight of her community even as she repurposes a laundromat. A late, heartbreaking twist turns her personal story on its head, reminding the viewer never to make assumptions and that ultimately we are all in this together.

It’s a vicious cycle: the things that made Hoxton Street great are the same things that cause its demise, in turn ruining anything that made it special in the first place. It’s one thing for a place to evolve positively— such as with the introduction of the Windrush generation and the rising economic power of the City — yet any change should’ve been properly managed with the help of the government, The Street squarely laming the blame on the negligence of the Conservative party.

As the double infliction of Brexit and Grenfell Tower impose even greater mental and physical harm upon the local population, the tragedy of Hoxton Street over the past four years becomes the tragedy of London, and by extension, the UK itself. Do the government care about working class people at all? Judging from this film, all evidence points to the contrary. While pointedly didactic (it may as well have said “Vote Labour” at the end) it earns the right to be, caring deeply for its subjects and begging for an empathetic solution.

The Street will be released in UK Cinemas on Friday, November 29th. On VoD in March!

Our editor Victor Fraga met up with Ken Loach in order to find out what's gone wrong with workers' rights in the UK, as he releases his new film taking aim at zero-hour contracts [Read More...]