K‘na (Mara Lopez) finds herself trapped in an undesirable dilemma, as she has to balance realising her personal dreams with her duties as a village dream-weaver. Chosen by her town-folk to fill the vacant position, K’na is freighted with delivering visions through colourful abaca fibres. Tied to the boughs that hold her village afloat, K’na fancies the courtship from the broad-shouldered Silaw (RK Bagatsing), before Royal duties divide her impressionable intentions from her personal. The tribes follow tradition with the punishing reverence of survival, but K’na and Silaw share some moments of unbridled flirtation. Animalistic in their desire, their collegiality needs to be subdued.

In a pastoral pillowed story, the naturalistic setting suits the dogma narrative on display. Director Ida Anita Del Mundo’s work recalls the spiritual chronicles Martin Scorsese detailed in hieratic Kundun (1997) and the sacramental Silence (2017), though it lacks the directorial interpolations Scorsese steeped into the decelerated epics. What the film offers are moments of stark provincial reflection as the film opens with a mother dying with the baby she pushes to life. Harrowing, the mood devastates the surroundings, as K’na surrounds herself in the duties she is groomed to follow. A strong command of story makes up for the stiff visual content, much of it annoyingly soft focused on the indigenous Tboli family. 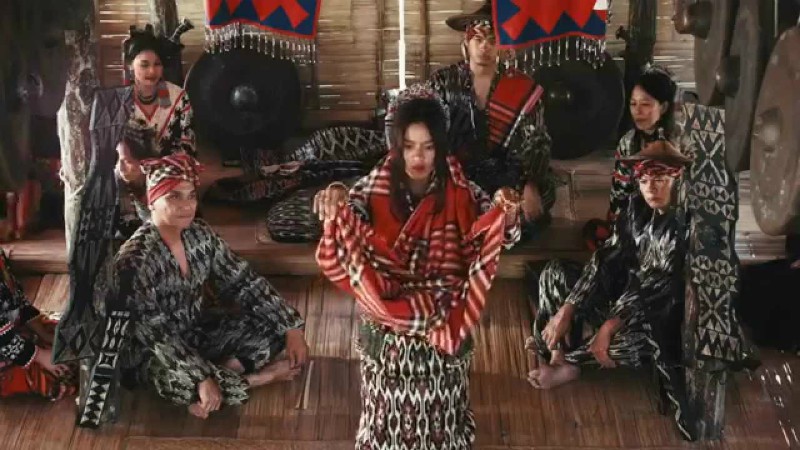 They are a family who deserve better film treatment, powerful as they are in the wars they fight with their rivals. K’na, in her new found position, has the opportunity to bring peace to a land that has seen little of it. In an intense, fierce, personal drama put across by an outstanding lead from Lopez, viewers are led on a journey summoned its unwillingness to pin itself down to one aspect of the character’s dilemma. In a battle so wedged in sorrow and love, K’na must decide between marrying for duty or love. The battle scenes, sloppy in their choreography, pale in their ambition to Lopez’s stellar acting as she winces in combustible agony, unbeknownst to her nuclear family.

Outside the wooden houses, a solitary camera floats over a deluge of water waded greenery, Lake Sebu’s rural majesty simmering under the wooden paddles that sail her. In a drapery of natural shots, the surrounding collage of the Philippines contrasts the pain K’na feels. Willowy, wooden and unworried, the scenery keeps the viewer’s eye afloat just as Lopez keeps it memorable.