Isabel (Michelle Williams) is first seen meditating with a group of children on a vastly scenic temple in India. She works for an Indian orphanage struggling to secure sufficient funds. This sets off a divisive plot point that has always been a very common archetype for movies regarding the white saviour in a foreign land, realising the penury its indigenous masses endure on a daily basis. Isabel is considerably not only the ‘saviour’, but a mother to the children, especially Jai (Vir Pachisia), a boy who was discovered abandoned when he was a baby, and taken to care by Isabel.

When a wealthy benefactor has a potential offer to donate to the orphanage, Isabel flies to New York, where she’s uncomfortably accustomed to a glamourised suite and suits with assistants. She meets Theresa (Julianne Moore), the benefactor. Immediately there’s something strange about their exchange. Could it be Isabel’s muted percipience on the luxurious and all too bourgeoisie lifestyle Theresa instinctually exhibits? Could it be the impassive nature of Theresa’s business, and the lack of genuine empathy for a cause which seems to be the only thing motivating Isabel? Yes, those are pretty instant factors that are played too easily on the nose, but there’s something deeper that eventually adds up.

Their meeting is quick and futile, but Theresa questionably invites Isabel to her daughter’s wedding. Isabel attends the wedding only to make a discovery that further unveils a traumatic backstory between Isabel, and Theresa’s husband, Oscar (Billy Crudop), and the bride herself, Grace (Abby Quinn).

After the Wedding is a remake of Susanne Bier’s Danish film of the same title starring Mads Mikkelsen. This version switches the roles, yet tells the same story. The wedding itself serves as a metaphor for drastically committing to life term decisions without truly understanding the principles behind the commitment. Grace inexplicably marries when she truly isn’t ready to, in the same way Theresa, Oscar, and Isabel weren’t ready to be parents at a time of ignorant bliss, and that all pretty much intersects after the repercussions of what transpires during the wedding. 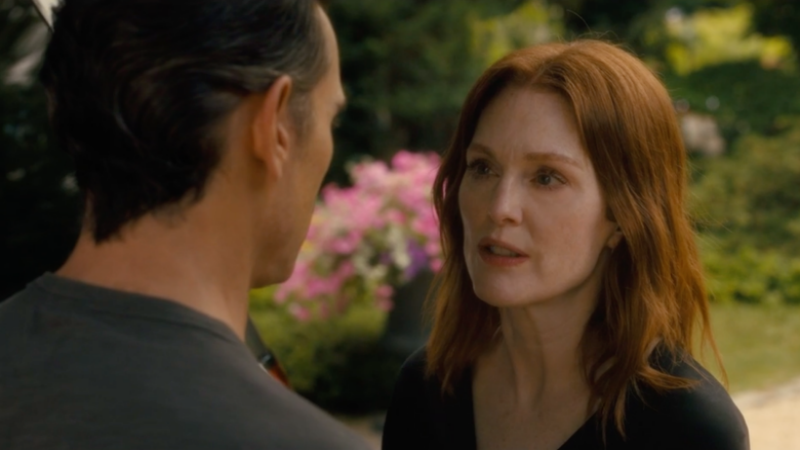 Oddly enough, both this remake and the Danish film aim to tell three different stories and are only really interested in one. One story being the secret the main players discover and how they all emotionally learn to come to terms with it. The second being a more intriguing story on the all too parallel but all too contrasting nature of the Americanised-higher class culture meshing with an American’s refined experience for a culture which serves little to no attention to finding significance to insignificant attributes for happiness. The third being the white saviour of an Indian orphanage.

The drama After the Wedding seems all too contradictory and manipulative. It becomes clear Grace is the key, and ironic mirroring image for Theresa, Oscar, and Isabel. Her involvement in the discovery of a long living secret has her switching personalities, and making decisions that don’t really ever seem realised. And Theresa’s motives, which gradually builds up towards the end, seems all too coincidental and heavy handed.

As a remake, what is After the Wedding trying to say that can be taken by its viewers to an abstruse means? Why include the backdrop of the Indian orphanage other than to convey Isabel’s desensitised perception of Americanised culture (this specifically being rich white people from New York)? Could’ve there been a deeper, perhaps more singular story of the boy, Jai (maybe aim for a mainstream take on an ‘Apu’ trilogy narrative)? And if not, could’ve we’ve just gotten an entire film set on the night of the wedding with no immediate backstory to the main players?

It feels all too polished, strongly relying four very good performances. But what After the Wedding proves as a remake, is its lacking approach for telling a story beyond its original story. Its images and ideas open for intriguing premises that are only there to strike a sentiment already too familiarised.

After the Wedding is in cinemas on Friday, November 1st. On VoD in April!

Life must go on for a young woman after her teen daughter goes missing, in this dirty kitchen sink drama starring Sienna Miller - on VoD in April [Read More...]

Strangers on their way to a wedding bond through their mutual hate of pretty much everything and everyone they know, in romcom featuring Keanu Reevs and Winona Ryder - in cinemas Friday, May 10th [Read More...]