"Filthy genius movie"
Based on a real lie! Upbeat film about family and terminal illness subtly explores the vast, cultural gulf between West and East - now available on VoD

New Yorker Billi (Awkwafina) is constantly being phoned from China by her granny or Nai Nai (Zhao Shuzhen). Billi has lived in the US since age six and is now thoroughly Westernised with her own apartment.

It therefore comes as something of a shock to learn that her parents Haiyan (Tzi Ma) and Lu Jian (Diana Lin) are going to China ostensibly for her wedding of her Japanese immigrant cousin Hau Hau (Chen Han) but actually to see Nai Nai before she dies. The latter has been diagnosed with stage four cancer and her sister Little Nai Nai (Hong Lu) who looks after her in China has decided it would be better if Nai Nai didn’t know. So the extended family are going to China with all of them sworn to secrecy about the real reason for their visit. 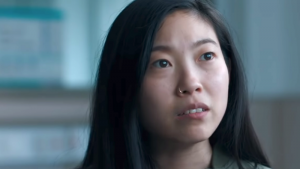 Pitched as a US movie, this is mostly in Mandarin with subtitles. Maybe 10% is spoken in English. Plus a smidgen is in Japanese with no subs, as Hau Hau’s Japanese bride Aiko (Aoi Mizuhara) speaks no Chinese.

While the film works well enough as a family drama, where it really scores is in the tension between the two cultures, Chinese and US American. The Chinese is all about family, society and the greater good while the US American by way of contrast is all about the individual.

Nai Nai and her Chinese relatives want to know when Billi is getting married, and how much money she is going to make, whereas she herself is more interested in self-expression as a writer. More poignantly however, the Easterners see not telling someone they are terminally ill as a good thing because the protected person will enjoy life more, whereas the Westerners see it in terms of keeping a dreadful truth from someone who should be told about it. 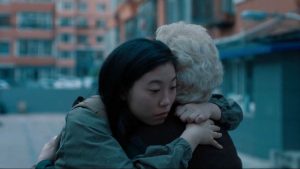 Director Wang derives a degree of absurdist comedy from all this, yet these underlying cultural conflicts lend the proceedings a sense of gravitas. After last year’s shallow but fun, US Chinese comedy Crazy Rich Asians (Jon M.Chu, 2018), The Farewell grapples with tough intercultural conflicts on a very deep level with echoes of Taiwanese-American outing The Wedding Banquet (Ang Lee, 1993). It’s possible that Western and Eastern audiences may view the film very differently. But in both cases, it’s worth viewing.

The Farewell is out in the UK on Friday, September 20th. On VoD in April. Watch the film trailer below: