Buñuel In The Labyrinth Of The Turtles

"Greasy movie"
2D animated drama-doc details the reasons for and struggles of Luis Buñuel to make the documentary Land Without Bread - on VoD on Thursday, July 16th

Following the success of his surrealist film L’Age D’Or/The Age Of Gold (1930), film director Luis Buñuel finds his main source of funding cut off when the strongly Catholic mother of his primary investor puts pressure in the latter. At the same time, a stranger named Eli Lotar strikes up a post-premiere conversation with the director saying he saw no influence of Dali in the film and presses a book Las Hurdes into Buñuel’s hands.

Frustrated at the lack of funding for his films, Luis decides to film the book which details the appalling living conditions of poor people in a remote village in rural Spain. He visits old friend Ramón Acín who has a family and recently sold a sculpture, immediately ploughing the money into a school for poor locals. They go drinking and Ramón buys a Christmas lottery ticket, joking that if he wins, he’ll fund the film. Amazingly, he wins.

So as producer, Acín accompanies Buñuel to a remote village in Spain to film the documentary Land Without Bread/Las Hurdes (1933). 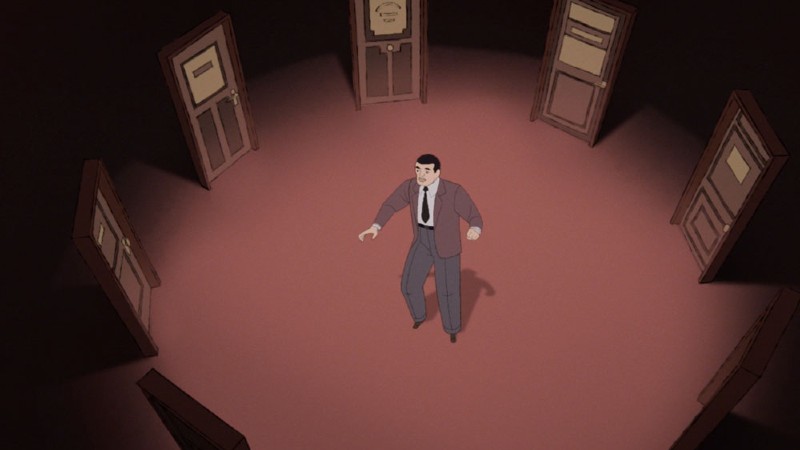 This fits neatly into the genre of films about filmmaking and film history. Its production in the two dimensional cartoon medium allows for elements as Buñuel recreating for the camera such true life scenes as a goat falling to its death from a dangerous mountain ledge and the occasional dream or fantasy sequence – Daliesque elephants on stilts walking the streets of Paris, a dream in which a beautiful, half naked woman turns embarrassingly into first The Blessed Virgin Mary and second his own mother. Excerpts from L’Age D’Or and Land Without Bread are live action clips from those films.

There are also minor nods to Japanese 2D animation maestro Hayao Miyazaki, with characters lying on the ground on a hot day staring at a clear blue sky.

Whether you’re familiar with Buñuel or completely new to this giant of Surrealist cinema, this Spanish/Dutch production is well worth seeing. Even if the obvious selling image of elephants on stilts doesn’t accurately represent most of what it’s about.

Buñuel In The Labyrinth Of The Turtles showed in Competition at the 2019 Annecy Animation Festival, when this piece was originally written. It’s out on VoD on Thursday, July 16th (2020).

The whore, the madonna and the one-night stand. A rotoscoped drama in which three women in very different social situations struggle to survive the sexually repressive regime that is Tehran - now available on VoD [Read More...]