"Dirty gem"
Afro-American man accidentally witnesses and films the police killing of another Afro-American, in powerful drama about getting trapped in the machinations of power - in cinemas Friday, January 18th and on VoD on Monday, January 21st

Darius Larson (Samel Edwards), a very friendly Afro-American dealer of illegal cigarettes, stands outside a small shop in the Bed-Stuy area of Brooklyn and meets all the local dudes. One of them is Manny (Anthony Ramos) who gets a bit of cash off him and then goes home to his wife and little daughter. Later, while out walking in the street in the evening, Manny comes across Darius, who police are trying to arrest outside the shop. Manny whips out his mobile and starts filming. Manny is not particularly interested in filming anything significant, but suddenly Darius is shot dead and Manny realises that he has recorded the full details of Darius’s death.

The recorded footage on the mobile is the central theme of the film as it reveals that Darius was shot dead without justification. All three characters who look at it closely realise that they should act on what they see. Manny acts and is viciously compromised by the cops. Dennis Williams, (acted with great nuance by John David Washington), an honest Afro-American cop who works in the same precinct as the bad cops reports it but is thwarted by the response to his report.

Zyrick Jr., a promising young African-American baseball star realise that he must act up after the cops plant incriminating material. This is to his father’s overwhelming disappointment. He is desperate for his son to succeed at baseball and, as a cop himself, does not want to rock any boats. 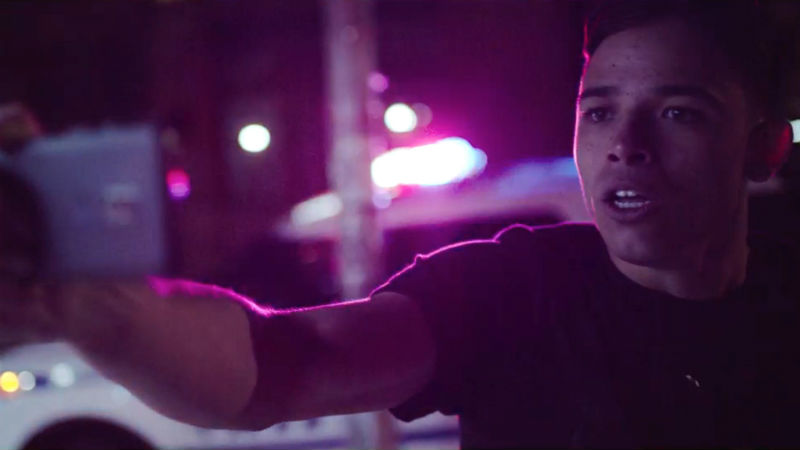 The film quietly but insistently emphasises how trapped people are in the machinations of power. The response to Dennis’s report is typical of the methods of power. He is interviewed with great courtesy and correctness by an investigator (an Afro-American woman) and invited to say what he knows about the bad cops (about who complaints on other matters have been made). He cannot, however, really do so as he has not worked closely with them. As the investigator leaves, she looks at him as if he is a tremendous waster of time. Dennis is not a waster of time.

The main fact is that Darius was shot dead without any justification. The establishment always makes a show of investigating criminal matters in the periphery, while carefully avoiding the root causes of the problem. Even if police forces have “rotten apples” in their midst, which their superiors deplore, not too much bad publicity is allowed to get out. This is not just an American phenomenon. It featured at the Hillsborough football stadium investigation, the shootings in Derry on Bloody Sunday and the Guildford Four.

The situation of Zyrick’s father is particularly sad. He is a loyal cop and like many Afro-American is desperate for his son to escape the obscurity of his birth by succeeding at sport. He accepts, however, that “these things happen” and it is better to leave matters as they are. 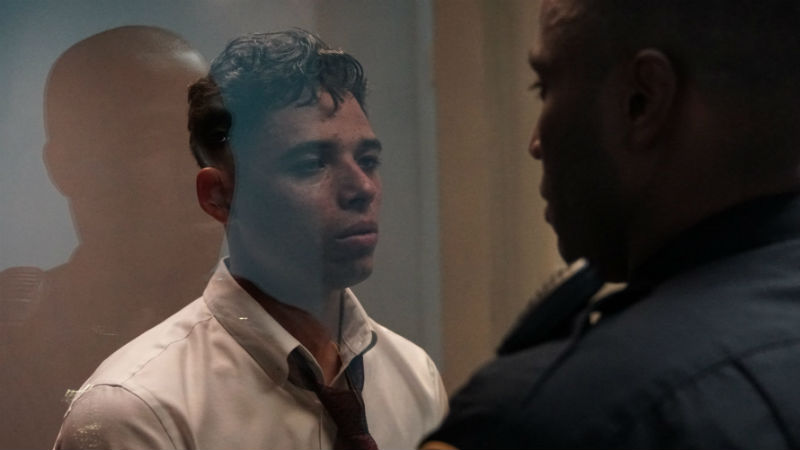 This emphasises the slogan “Black Lives Matter”. The fact is that in American society Afrp-Americans count for less, as did Irish peasants in the United Kingdom in the 19th century, East Enders in London, the tenants of Grenfell Tower, the inhabitants of favelas in Brazil, poor African peasants in the hand of ruthless dictators and so the list can go on. The film quietly and insistently demonstrates how good people are caught up in the processes of power and find it hard to escape. This is done without an undue amount of Hollywood special effects or plangent script-writing although touching scenes of children playing with the protagonists (for instance, Manny and his little daughter sending a paper dart over the Brooklyn roof-tops) tells us in a thoroughly clunky Hollywood manner that these are, after all, very decent people.

Monsters and Men isn’t just an angry movie about “Black Lives Matter” pushing all the right emotional buttons. It goes much deeper than that in its concerns, covering the experience of virtually anyone who speaks “truth to power”. The film premiered in Sundance 2018, where it was described as a “hit”. It is out in cinemas across the UK on Friday, January 18th and then on VoD on Monday, January 21st.