The past 12 months have seen a large number of urgent and inflammatory films dealing with the issue of racism against Black Americans, so we have picked the NINE dirtiest anti-racist gems from the US exclusively for you

Few sane people would disagree that the unexpected election of Donald Trump represents a social and political regression for the US and the world. Pussy-Grabber-in-Chief isn’t just a dangerous egomaniac warmonger and a misogynist; he’s also an outspoken xenophobe and racist. His ambiguous and grudging condemnation of the Charlottesville neo-Nazi is the icing in the cake for white supremacists. They are feeling very empowered right now, having the most powerful man in the world on their side.

But there’s also bad news for these white supremacists and racists altogether: cinema hasn’t and it will not cower to bigotry. DMovies has seen a very large number of powerful films coming from the US in the past 12 months or so and denouncing racism loud and clear. In fact, the majority of these films were being made before Trump was elected, suggesting that this might be just the tip of the iceberg of a much bigger movement to follow. 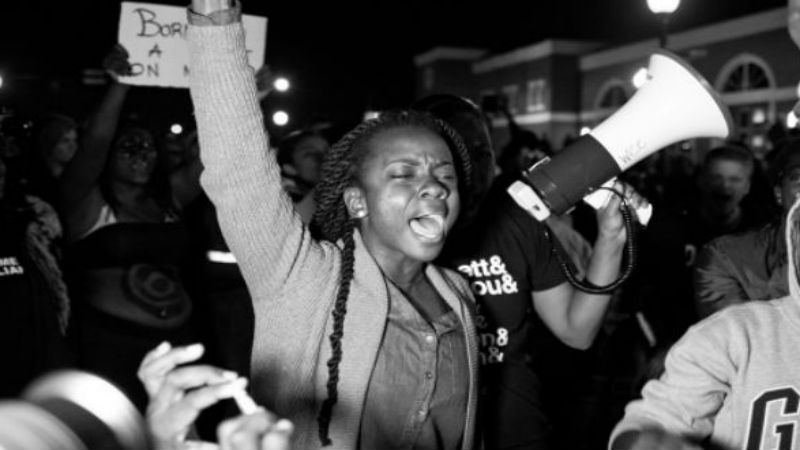 There are fiery documentaries about Civil Rights activists, the Ferguson riots and the Lovings, a blockbuster about the Algiers incident, two racially-charged horror movies and much more! The nine dirty gems below are listed alphabetically. Don’t forget to click on each individual film title in order to accede to our exclusive film review!

* The image at the top of the article is from an Afro-American woman yelling ‘Freedom’ when asked to shout so loud it could be heard all over the world during a Civil Rights March on Washington in August 1963. And the image just above if from the doc Whose Streets? (which is on the list below). Films can also send out screams across the planet!

person is shot every two hours and 45 minutes in Chicago. The rate is higher than the American soldiers death toll in Afghanistan and Iraq altogether. The title of Spike Lee’s new feature, Chi-raq, is a portmanteau of Chicago and Iraq, and a rapper’s nickname for the windy city. It is an artistic attempt to raise awareness of the tragedy in parts of the city, particularly the South Side. Afro-Americans are of course the most affected.

Spike Lee is a champion in the fight against racism towards black people. His films helped to catapult black rights in the United States decades ahead of other many other countries in the world.

You would hardly guess that this blockbuster was directed by a white woman, as Bigelow does wear the shoes of the “negroes”. Detroit does feel like a punch in the face of reactionary Americans, and a raging denunciation of an extremely brutal chapter in US history.

She’s white, he’s black, they’re urban, he needs to meet her parents who live in a house on a huge estate out of town. They find a pleasant white couple with black servants. The black servants appear to under some sort of mind control to make them more palatable to white people. The question now is: are they racist? This more or less sums up the plot of this racially-charged horror. Just be prepared for a major ugly twist at the end. Ugly as racism.

That inconvenient nigger is here to wreak havoc to your shady American freedom – I am not your Negro is a very provocative piece that uses incendiary language in order to inflame a deeply unequal, biased, hypocritical and racist society: the United States of America. The film will burst every myth of racial equality and democracy in the most powerful country in the world, and it’s an indispensable watch to all nationalities, races and creeds.

This documentary film by Raoul Peck is based on James Baldwin’s (pictured above) unfinished manuscript Remember This House and narrated by actor Samuel L. Jackson. It explores the history of racism in the US through Baldwin’s memories of civil rights leaders Medgar Evers, Malcolm X and Martin Luther King, Jr, as well as their tragic and untimely death.

Also watch DMovies‘ editor Victor Fraga’s interview on Russia Today about I am not your Negro and racism:

At the age of 18, Mildred (Ruth Negga) fell in love and became pregnant with Richard Loving (Joel Edgerton) in Caroline County, Virginia. Mildred was a person “of colour”, while Richard was white. In June 1958, the couple traveled to Washington, D.C. in order to get married, thereby evading Virginia’s Racial Integrity Act of 1924, which made marriage between whites and non-whites a crime punishable by law.

hey were eventually arrested and sentenced to one year in prison, suspended for 25 years under the condition that they abandoned the state immediately. So they left their families behind and promptly moved to Washington DC. They were arrested again when they returned to Virginia so that Mildred could give birth to her first child at home. This real story is certain to move you profoundly.

Moonlight tells the story of a black male named Chiron at three stages of his life: childhood, adolescence and adulthood (played by a different actor at each stage). He is constantly seeking maternal love and affection, but his mother constantly shuns him in favour of her drug addiction. He ironically finds solace with a local drug dealer, who becomes a provisional father figure to the young black boy. He learns from him that his mother is his client and also, more significantly, the meaning of the word “faggot”. “It is a word to make gay people feel bad about themselves”, the unexpectedly gentle and caring man explains.

Moonlight isn’t just about racism, but also about homophobia and intersectionality. Having snatched the Best Picture Oscar, the film has become a landmark in the fight against bigotry for both Blacks and LGBT people.

Quest is a touching and sobering Dogwoof doc about Christopher “Quest” Rainey, his wife Christine’a “Ma Quest”, their daughter Patricia “PJ” and other relatives, friends and associates who live in North Philadelphia. They host a music studio at home, voicing local artists and providing a sense of identity to the community. Along their way, they have to face up a number of crises, including extreme violence, cancer and addiction. Very significantly, the documentarist Jonathan Olshefski follows the footsteps of the family roughly during the eight Obama years.

Sadly, the average Afro-American family faces problems, to which many white people are either alien or oblivious. A rapper in the movie rhymes it succinctly: “Racism still lives in the days, just in different ways”.

This is the perhaos least explosive film on the list, with a far more gentle and subtle – and yet conspicuous – anti-racist message. Milo (Eric Ruffin) is a young teenager living at a bottom of the social ladder on a housing estate in New York. He’s obsessed with vampires. He kills people and drinks their blood. He’s also a loner taunted by a gang of bullies. Sizing up likely prey, he makes friends with potential victim, a white girl named Sophie (Chloe Levine). At home, Milo lives with his former soldier elder brother Lewis (Aaron Clifton Moten), their mother having committed suicide some time previously.

The film deals with race in the sense that many of the housing estate residents including Milo and his family are black, and white people visit thinking they can buy drugs off dealers on the estate. But equally, Sophie is white: perhaps this is a consideration when Milo first stalks her, but it quickly becomes apparent to both him and us that she’s just as much an unloved and struggling teenager as he is.

This energetic documentary by the activist and filmmaker Sabaah Folayan shows the inconvenient truth behind the dramatic scenes that took place in Ferguson, Missouri, in 2014. An African American unarmed teenager, Michael Brown, was killed by police and left lying on the street for hours, despite the many witnesses and a CCTV camera just around the the corner.

The Black vigilantes decide to become their own keepers, since the police was not doing their work, plus often disrespecting the Constitution. The protests include riots, arson and speaking up words of anger in front of troops armed with tear gas grenades, guns and sniffing dogs.

Is this the year of “minority” horror?

The first six months of 2017 saw a number of dirty films either made by women or dealing with the subject of racism. Is the mutant beast of horror changing shape or is this just a quick fad? [Read More...]

British warfare, Chinese nostalgia, Kosovo transexuals, Iggy Pop, Brazilian resistence and much more - we have selected the filthiest films of the year so you can sit back and enjoy them! [Read More...]