"Greasy movie"
The float monty! British comedy about a group of males who bond through synchronised swimming is as close as you will get to THE FULL MONTY, with your knickers on! Now available on VoD

A small group of British men of all colours, shapes and girths get together in a field not often associated with males. They have to overcome their own prejudices, to challenge orthodox notions of masculinity as well as to face objections from their family and friends. What they are doing raises a lot of eyebrows. They have to dance, rotate, swivel, do a little acrobatics and look entertaining for a large cheering audience. And they are wearing skimpy clothes. And the action culminates with a Tom Jones song. Sounds familiar? No, this is not Peter Cattaneo’s The Full Monty (1997). This is Oliver Parker’s Swimming with Men. Basically, the difference between the two is that the gear doesn’t come off at the end. And the Tom Jones song is It’s a Man’s World instead of You Can Leave Your Hat On. 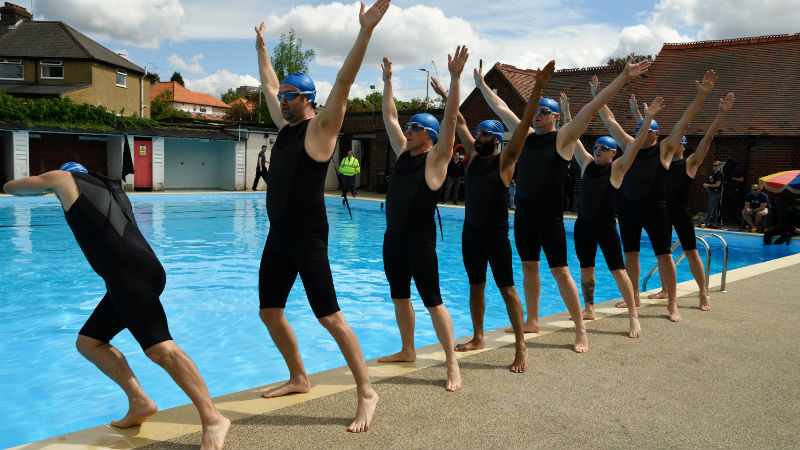 Eric Scott (Rob Brydon) is having a mid-life crisis. He can no longer connect with his wife. He’s convinced that she’s cheating on him, and he feels intimidated that she has an elected job at the local council. His job as an accountant is banal and mundane. Swimming becoming his only venting outlet. He becomes part of an all-male, middle-aged, amateur synchronised swimming team, a sport normally associated with women. What initially looks like an uncompromising hobby suddenly becomes the central pillar of Eric’s life, a predicament not dissimilar to the other seven men’s. Then the unthinkable happens: the group is invited to take part in the unofficial World Championship of Male Synchronised Swimming. But could they win the tournament, thereby overcoming their personal fears and barriers and also honouring Britain with the unusual and novel prize?

Swimming With Men is a feel-good tale about ageing and finding redemption in sports. It has all the ingredients of a conventional romcom, such the sexually insecure protagonist seeking to rekindle some sort of affection, and finding an very awkward solution to the problem. There’s also a like bit of British patriotism, but thankfully not enough to poison anyone. The director was careful to avoid an all-English film by creating a Welsh character. The choice of Welsh singer Tom Jones to top the film soundtrack is no coincidence. Most significantly, this is a film that challenges ageism and body fascism. The eight males learn not to be embarrassed of their real bodies in all of their dirtylicious imperfections. There’s nothing ugly about “wilting like a flower”. It can be done gracefully and with confidence. 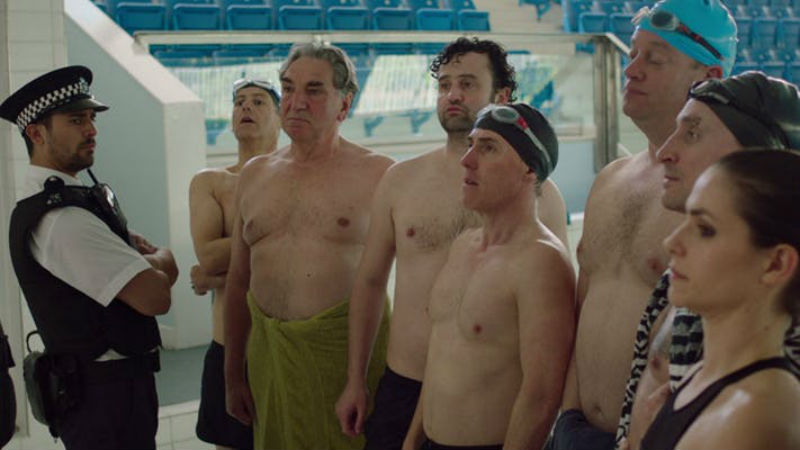 I am surprised that Swimming With Men only received a 12 certificate. I think that this is a film perfectly suitable for children. I don’t remember seeing drugs and discriminatory language. Perhaps it’s the bit about imitable behaviour! You probably wouldn’t want your children engaging in dangerous manly acrobatics, would you? I would hazard a guess the Oliver Parker was disappointed.

Swimming with Men is out in cinemas across the UK on Friday, July 5th. It’s out on VoD on Monday, November 5th