"Filthy genius movie"
In the name of the father, the son and all the male Elders in my local church! Magnificent British drama permeates the highly insular life of a Jehovah's Witness family and investigates the excruciating pain of a mother forced to choose between her faith and her family allegiances - in cinemas Friday, July 27th

This is as close as you will probably ever get to the heart of a Jehovah’s Witness (unless you are a Jehovah’s Witness yourself). Apostasy offers the opportunity to wear the trousers and the shoes of a Jehovah’s Witness mother as she is forced decide between her faith and her daughters. Sounds clichéd? Well, it isn’t. The realistic and non-judgemental tone of Dan Kokotajlo’s first feature film ensures for a heart wrenching ride entirely devoid of stereotypes. It’s sobering and enlightening without resorting to saccharine and exploitative devices. The British director is a defector of the Christian sect himself, so this is undoubtedly also a very personal endeavour.

Ivanna (Siobhan Finneran, whose performance must be strongly commended) and her two daughters Luisa (Sacha Parkinson) and Alex (Molly Wright) live somewhere in suburban Manchester, and they are devout Jehovah’s Witnesses, bonded by “The Truth”. Being a Jehovah Witness means that you are entirely devout to your faith. There is no in-between. 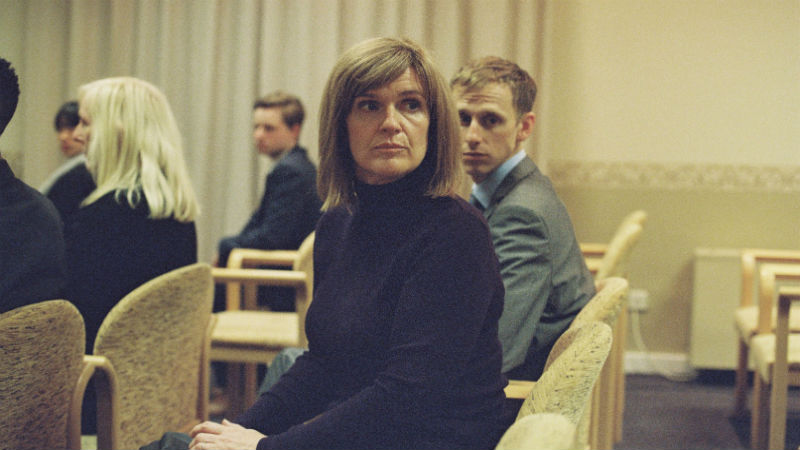 The religion demands integral adherence to its principles, which includes the virtual disconnection to those unfamiliar with “The Truth” (their doctrine), and also the prohibition of blood transfusion. The problem is that Alex is anaemic and requires a transfusion, while Luisa becomes infatuated with a non-believer. Will Ivanna end up on her own, or are there ways of reconciling her strict faith with the “tragic” predicament of the two young girls?

Made on a budget of just £500,000, Apostasy is an extremely austere film, and not just in the financial sense. The tone is extremely somber, harsh and stern. The performances are stoical, the camera movements are scarce and sparse. The locations are bleak and soulless, including the church on a desolate roadside, persistently filmed from exactly the same angle. This is by no means a criticism of the film. This is a very conscious and appropriate creative choice. Apostasy is a masterpiece of acerbity and austerity. Dan Kokotajlo feels like some sort of British version of Austrian filmmaker Ulrich Seidl – minus the sexually deviant element. To me, this is no mean feat: Seidl is the most important living movie director in the world.

One of the moments in the film a lot of people might recognise is when the two girls wear a hijab and knock at the neighbours’ door speaking Urdu, having somehow found out that they come from Pakistan. Proselytism is key to the survival of Jehovah’s Witnesses, and so followers are constantly in the active search of new converts. Who hasn’t had a Jehovah Witness knocking on their door on a Sunday morning? I remember when they came to my place a few years ago preaching about paradise and eternal life in broken Portuguese. Somehow (and only Jehovah knows how) they found out that I come from Brazil, and wanted to seduce me into their cult by speaking my mother tongue. 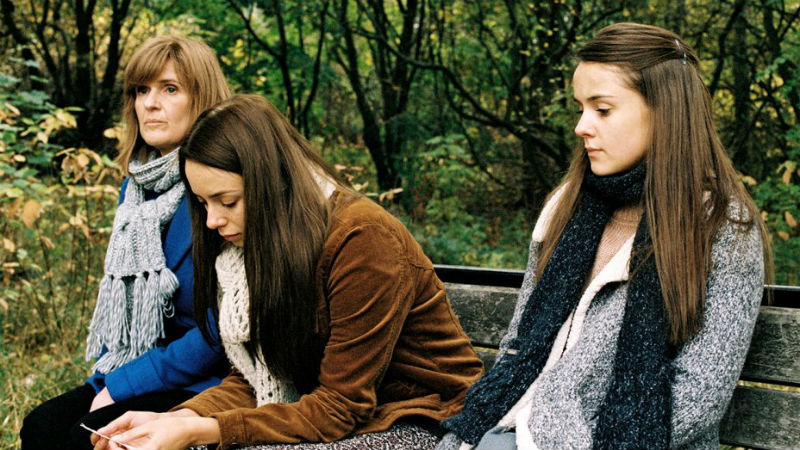 The film also includes many nuggets of knowledge about the ultra insular religion, which also makes it for very informative viewing. You will learn that Jesus was killed on an upright wooden stick, making the cross a pagan symbol, that eternal life and paradise are only available to those who follows “The Truth”, and that Disfellowshipment is synonymous with immediate and total rupture with followers. The preachers (known as “Elders”, and always male) chastise followers for voicing own opinions. The “New System” is depicted in a puerile television representation, which brings Ivanna to tears: jolly people mingle with animals in verdant hills, just like the images you might recognise from brochures.

Apostasy is out in cinemas across the UK on Friday, July 27th. Not to be missed – whether you are profoundly religious or a staunch sceptic like myself. This is universal cinema at its best.

Another film about Jehovah Witness faith and blood transfusion is coming up in September. Stay tuned for our dirty review of Children Act (Richard Eyre), starring Emma Thompson.

Despite being doused in saccharine and carefully crafted to elicit tears from audiences, Wim Wenders's latest doc carries urgent messages of tolerance and solidarity - now available on Netflix [Read More...]