"Thoroughly sanitised movie"
The sequel to Denis Villeneuve's neo-Western from three years ago is a reactionary piece of filmic drivel, teeming with prejudices, glaring falsehoods and sheer American propaganda - now on all major VoD platforms

Denis Villeneuve’s 2015 thriller Sicario was an exquisitely executed Neo-Western. Like Cormac McCarthy’s novel Blood Meridian, it followed a group of nationalists murdering almost everyone they come across on the Mexican border as an assertion of dominance. Mutilated bodies lined the streets, building the cartel myth, drawing its American audience into fully believing its bandit homeland while consciously ignoring the perspective of the Mexican characters it hastily sketched out. Cinematographer Roger Deakins used rule of thirds so heavily that the viewer is helplessly drawn to the centre of the screen, turning you into the Emily Blunt character – so focused on one perspective that you cannot see the entire picture. It was a perfect modern example of Robin Wood’s ‘Incoherent Text’, wherein a well made film’s problematic textual aspects are inconsolable, but essential to its meaning. The depiction of Mexicans (an almost entirely unseen mass of victimhood, or a gang member), the treatment of women: utterly problematic, but true. It’s an incoherent world. It was an overwhelming experience of powerlessness, a cinematic vanishing point. But its sequel is everything that Villeneuve warned us about.

From Stefano Sollima, director of the sprawling Gomorrah TV series, there is an ambitious attemp to show the spread of the drug war into all corners of society. But this is not Traffic (Steven Soderbergh, 2000). 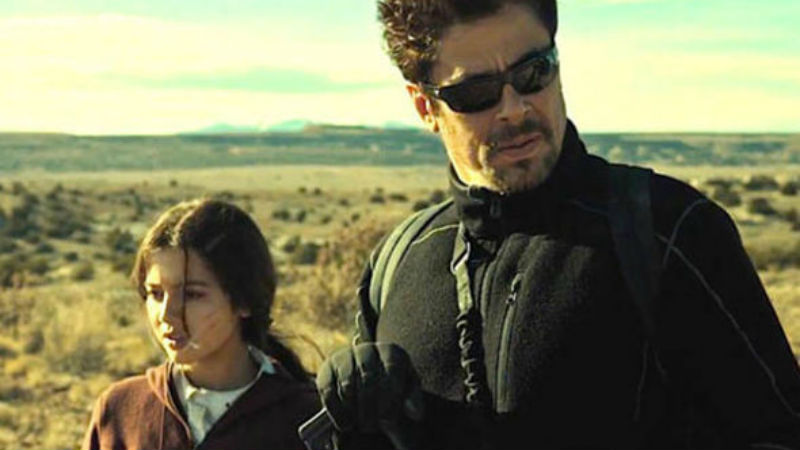 Sicario 2: Day of the Soldado opens with a title card telling us that immigration is in fact controlled by cartels, then cuts to a scene in which a group of people attempt to cross the US-Mexico border illegally. As they get captured by a patrolling helicopter one of their number prays in Arabic before blowing himself up. Let’s be clear here, no US terror attacks have ever been linked with the Mexico border, and there has never been any such incident as the one Sollima depicts here.

Clearly, Sicario 2 is not set in the real world.The first time we see our CIA agents they have just jumped out of a plane – that’s right, they float down from the heavens to save the day. This is what the ICE chuds think they are, a bunch of bros being bros, protecting the family. The shrill Catherine Keener gets in their way with insulting lines like ‘POTUS doesn’t have the stomach for this, he’s shutting us down’ and ‘He’s not worried about winning.’ That gesture to the generic offscreen presidents of old, but do not chime with the current US administration. And for the filmmakers to ignore this is for them to endorse it. It’s like the Starship Troopers (Paul Verhoeven, 1997) sequels, where the subversive elements of the original are ignored in favour of a cheap b-movie.

Taylor Sheridan, who wrote the first movie alongside Hell or High Water (David Mackenzie, 2016) and Wind River (Taylor Sheridan, 2017), is perhaps the new John Milius, a strong authorial voice who needs to come up against an equally strong director in order to give his screenplays something beyond the right-wing masculine power fantasy that he tends to indulge in. There are however, still interesting ideas at play. As the CIA build a phony war between cartels, by kidnapping Isabel, a Cartel boss’ daughter, we see the construction of the American hero narrative in real time. Whenever the film pauses to critique its characters’ actions, usually by having someone stare wistfully at the landscape, they always come to the conclusion that it’s a necessary evil. Instead of an Emily Blunt to identify with, the audience surrogate is Josh Brolin, who sounds and increasingly looks like Dog the Bounty Hunter, the character from the eponymous American tv series. If you’re still watching, it seems to say, you like what we’re selling you. 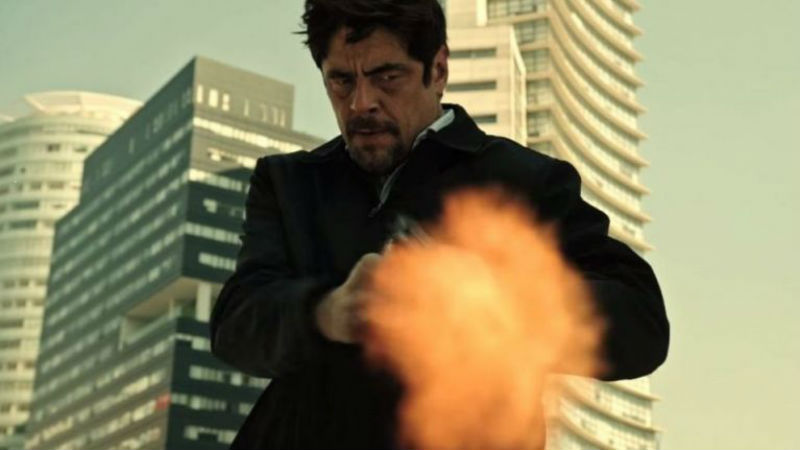 After Isabel’s attempted escape from the CIA, the film justifies her recapture by showing the vicious, leering cartel members out to save her. This initiates a sharp turn for the movie, which largely abandons Brolin and becomes a redemption tale for Benicio Del Toro, who attempts to get her to safety across the border. Del Toro, a chilling, magnetic presence from the first film, is interpolated into a more traditional. We get a direct reference to the last shot of The Searchers (John Ford, 1956), and he even dons a Stetson. As the film avoids politics for a good 20-minute stretch, the action becomes somewhat compelling. But its twists and turns rely on grotesque coincidences and build to a sequence in which the cartel split children and parents for the crossing. It’s a hell of a dog whistle.

This is all too coherent a text. This a fake, reactionary blockbuster masquerading as investigative scoop. It’s almost worth watching this piece of propaganda as a way of seeing how easily Hollywood can craft these dangerous narratives, and worst of all, how easily we can fall for it.

Sicario 2: Day of the Soldado is out in cinemas Friday, June 29th. It’s out on all major VoD platforms on Monday, November 2nd.

British action flick about WMDs and a chemical attack in London is a shining example of cinema as a fearmongering tool, and the last thing you need to watch right now - in cinemas [Read More...]

The empire of clichés and didacticism: the 2016 3D version of the epic movie is populated with stereotypes, and it is also a thinly-veiled celebration of military belligerence in the Middle East - out in cinemas now [Read More...]

War drama about Churchill's rise to power and crucial decision whether collude with the Germans has an spectacularly boring screenplay, plus it's infested with tub-thumping nationalism [Read More...]