"Dirty gem"
Like Oscar, Like Rupert! Rupert Everett writes, directs and stars as Oscar Wilde in the disgraced playwright's final years following his time in prison for committing homosexual acts – out on all major VoD platforms on Monday, October 15th

Opening, closing and running intermittently through this drama detailing Oscar Wilde’s final years is one of his best known children’s stories, The Happy Prince. It’s worth reading the story before seeing the film (it’s easily found online). The prince has died following a sheltered and pampered childhood and has been made into a statue covered in gold leaf and adorned with three precious stones. In the course of his friendship with a sparrow, the statue gives away his gold leaf and precious stones to poor people with the sparrow’s help and the sparrow dies. Statue and sparrow become the two most cherished things in the eyes of God.

An historical note: alongside achieving considerable success as a playwright in late British, Victorian society, Wilde sued the Marquis of Queensbury who was the father of Wilde’s lover Alfred Bosie Douglas. His legal action exposed Wilde as homosexual and led to two years in prison on charges of sodomy and gross indecency. This was how Britain dealt with being gay – or, as it was called, “the love that dare not speak its name” – back then. After his release, he left England in order to travel in Europe but he was a social outcast, his career had been destroyed and he died penniless. Only in 2017 was Wilde pardoned as one of around 50,000 men criminalised in their day for committing homosexual acts which have since been decriminalised. 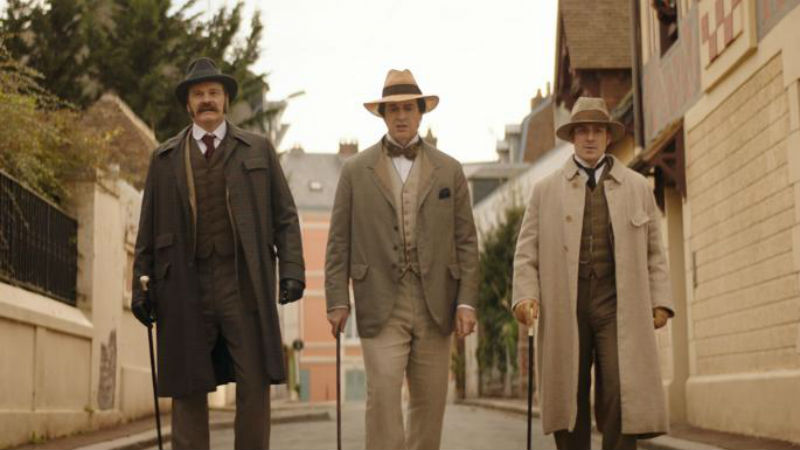 The film has proved something of an odyssey for actor and star Rupert Everett who was fascinated enough by the man to write a spec script about Wilde’s final, post-prison years. It’s a highly personal affair which has taken some 12 years to bring to the screen and it’s hard to imagine anyone other than its writer and star directing it, no mean feat when you’re playing the lead role at the same time and appearing in 95% of the film.

As an actor, Everett inhabits Wilde’s skin and totally draws you into his character and world. You feel a mixture of empathy and disdain towards him. Yes, he’s badly treated by object of his affections Bosie (Colin Morgan) but manages to almost alienate Robbie Ross (Edwin Thomas), the one friend who sticks with him and, as we read at the end, paid off all Wilde’s debts after his death.

He completely abandons his wife Constance (Emily Watson) and two sons as well. Constance gets very little screen time, hardly any of it in her husband’s presence, but Watson commands the screen whenever she appears. Wilde himself aside, she’s the only character subjectively portrayed in the narrative. At one point she appears like a spectre in Wilde’s room. Shortly afterwards, he receives a telegram to say that she has died.

Colin Firth is apparently an old friend without whose encouragement Everett doesn’t think he could have made the film. Here he plays Reggie Turner, an old friend of Wilde’s who sticks with him through the bad times. 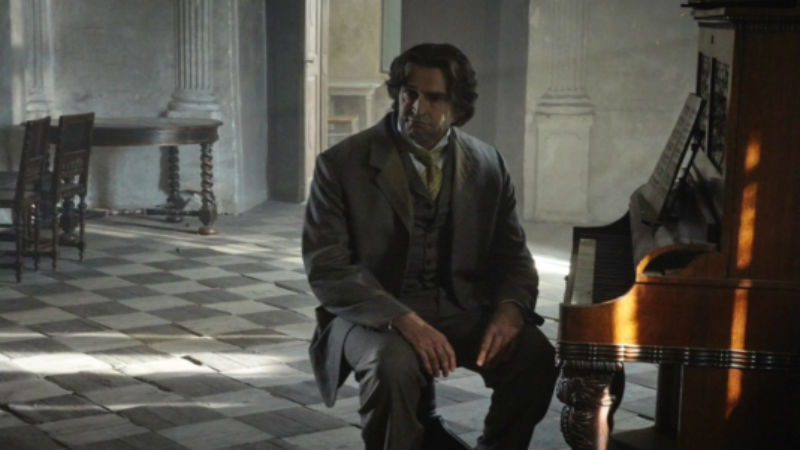 Elsewhere the film is populated with an amazing array of actors, among them Béatrice Dalle as a music hall type café owner who’ll take no nonsense, Anna Chancellor as a former admirer of Wilde when he was a successful playwright but now forbidden to talk with him by her brutish husband, Ronald Pickup as a judge and, right at the end, Tom Wilkinson as an Irish Catholic priest. All of which might have been terribly embarrassing, but Everett demonstrates a superb casting sense and the various actors fit their roles well.

In addition to Wilde’s own children who are peripheral to the proceedings, the parade of characters also includes a Parisian rent boy and his younger sibling, the latter hooked on hearing the next episode of Wilde’s eponymous, orally communicated children’s tale. That story might be seen as having echoes in the latter part of Wilde’s life with its obvious fall from grace and its protagonist’s move from a cosseted social position to one where he sees the world much more clearly from his new vantage point. However, every time you try to pin the narrative down to such a parallel, it doesn’t really fit: it’s somehow bigger than that.

The whole thing is an arresting portrait of a messy life in its final downhill spiral. While Everett doesn’t shy away from the gay subject matter, he never descends into titillation or showing us flesh for flesh’s sake either. Wilde may well have been a literary and artistic genius, but if this interpretation is correct he could be a pretty difficult human being at the same time. Everett doesn’t whitewash that in this warts-and-all portrait and his film feels all the better for it. If his performance as the man is striking, his abilities as a writer-director impress more in this tour de force.

The Happy Prince was out in UK cinemas on Friday, June 15th. It’s out on VoD on Monday, October 15th.

Compelling tribute to the fashion genius of 'savage beauty" draws comparisons to Oscar Wilde's Dorian Grey, seeking both to humanise and to immortalise the late artist - now available on VoD [Read More...]

One thought on “The Happy Prince”