"Dirty gem"
French director returns to the topic of labour rights, and how globalisation is crushing blue collar workers in France, in another electric documentary-like fiction starring Vincent Lindon - streaming now with DMovies

It’s just three years since Stéphane Brizé directed The Measure of a Man, a riveting fiction movie about a factory worker unable to decide whether his allegiances rest with his coworkers or with his employers. He then went on to make the literary drama A Woman’s Life last year. He now returns to the previous topic. While not a sequel per se, At War is extremely similar to The Measure of a Man on many levels, and it does represent the continuation of the labour rights discourse.

Laurent Amédéo (veteran French actor Vincent Lindon, who also played the protagonist in The Measure of a Man) is a factory worker, activist and union spokesperson at Perrin Industry, the automotive supplier branch of a larger German conglomerate. Two years earlier, the union had agreed with the bosses to work five extra hours a week without remuneration in exchange of a guarantee of employment for five years. The employees have kept their word, but the employers have suddenly decided to close down the factory, making 1,100 people redundant. Laurent and his associates refuse to budge. They decide to go on strike and to wage a war against the unscrupulous executives. 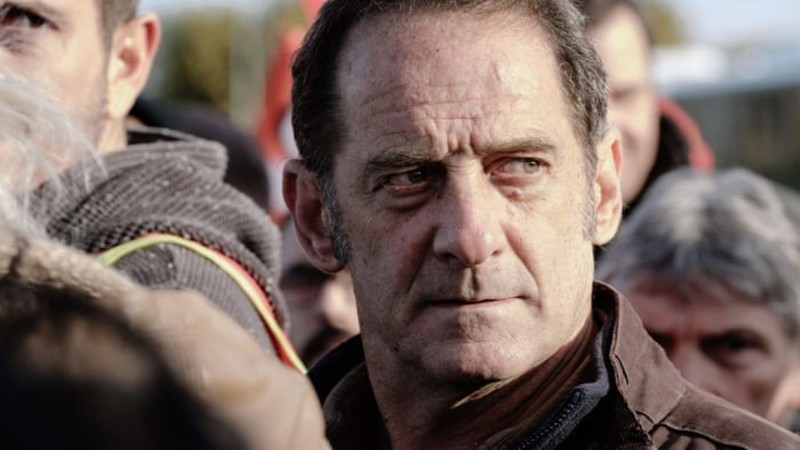 This is a film certain to please French hard left leader Jean-Luc Melanchon. Brizé dissects globalisation and capitalism, revealing how vulnerable workers are left at the face of neo-liberal interests. Despite irrefutable evidence that the factory is returning a profit, and that the company shares continue to soar, top management use rhetorical acrobatics in order to convince Laurent that the decision was inevitable. For example, they cynically argue that “everyone is on the same boat”, to which one of the strikers replies: “yes, except that we are in the bottom deck with the shit and the rats”. Government and courts are mostly complacent with sheer injustice, siding with corporate interests. You will cringe at the dirty tricks used by the big bosses. And you will regret that business interests must always prevail above the ordinary workers’.

Just like its topical predecessor The Measure of a Man, Brizé’s latest film also feels a lot like a documentary. Most of the film takes place on the streets and at the negotiation tables, as if captured by a journalist assigned to report on the events. These images are interspersed with fictionalised TV news and interviews. Overall, you are in for a frenetic and uncomfortable experience, with a jarring closure. After all, a working man’s life is no child’s play.

At War showed in competition at the 71st Cannes Film Festival taking place right now, when this piece was originally written. The timing of the film launch wasn’t irrelevant: May 2018 is a very special month for workers in France and elsewhere.

You can watch At War right here and right now with DMovies and Eyelet:

The Measure of a Man (La Loi du Marché)

The split allegiances of the ordinary man: in this new French movie, worker Thierry cannot decide whether to side with undignified coworkers and customers or to embrace the corporate values that earlier almost crushed his life [Read More...]