"Filthy genius movie"
Do you know what it feels like for a girl? Urban teenage boy and countryside girl repeatedly swap bodies overnight, as fate draws them together through a meteor strike. Makoto Shinkai’s breakout animation returns to cinemas, and is now for the first time in IMAX

In a spectacular and bravura single take, vertical panning shot, a meteor descends from the heavens through the clouds towards the small lakeside town of Itomori. Then, another time, another place: on a train in Tokyo a teenage girl spots a boy and their eyes meet but there’s no time to exchange names. She knows him but he has no idea who she is. As she gets off the train, he asks her… “Your Name?”

Thereafter, Tokyo boy Taki wakes up some days Mitsuha’s body, and the other way round. Soon, each starts writing the other messages on their hands, arms and mobile phones so that the other one knows what he/she has been up to while they swapped bodies. Until one day, her messages stop. 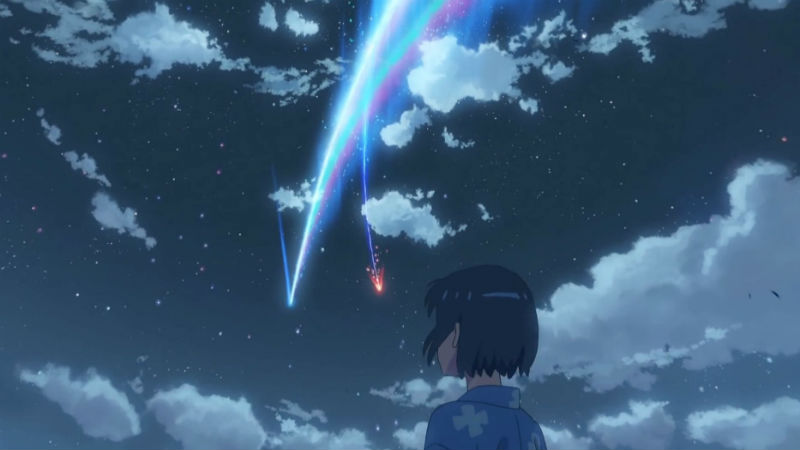 Like the falling meteor which unexpectedly splits into a shower, at once a beautiful display in the Tokyo night sky and an impending disaster in Itomori, this weaves together two ways of looking. Girl and boy. Countryside and city. Celebration and catastrophe. As a ribbon snakes through space and meteor fragments fall through the atmosphere, a thread weaves through a loom meshing separate timelines. When the two teens meet at the beginning, she is near the end of their encounter while he is at its start thanks to subtle storytelling sleight-of-hand. They may not both know each other yet, but they are connected. When finally they meet again on urban Tokyo hillside steps, the moment is poignant.

Although the meteor is expected to fall in one piece, at the last minute it splits into fragments, one of which will wipe out Itomori. After learning through Taki that this will happen, can Mitsuha and her friends alert the town – busy celebrating its annual festival – to evacuate before lives are lost?

Japanese films have dealt with disaster for a long time, most notably in Godzilla (Ishiro Honda, 1954) which turned the devastation of the A-bomb into the eponymous, city-wasting monster. Recent reboot Shin Godzilla (Hideaki Anno, Shinji Higuchi, 2016) shows the franchise still capable of delivering such myth and metaphor. 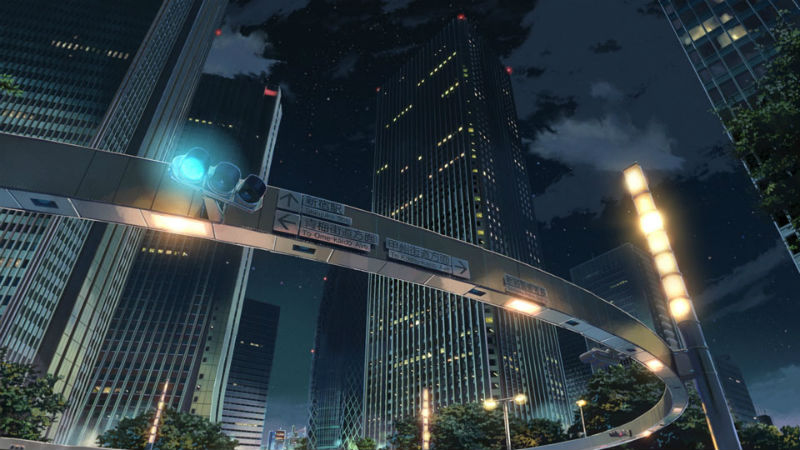 Not that Your Name is necessarily about nuclear strikes. Japan has a long history of earthquakes and associated natural disasters, most recently the 2011 tsunami and resultant damage to the Fukushima nuclear power plant. Life goes on but such disastrous events linger in the national psyche and inform popular culture. Even as Your Name absorbs Itomori’s annihilation into its wider culture as a pretty light show over Tokyo, it grapples with the magnitude of the disaster by placing us in the immediate days and hours beforehand.

Elsewhere, Your Name plays out as both teen romance and dual exploration of male/female identity. The two protagonists wake up separately in each other’s bodies to discover with a mixture of delight and embarrassment that they possess the genitals of the opposite sex. As the twin narratives move on to explore more psychological sexual differences, the body swap device proves genuinely affecting. By the time of the impending annihilation of Mitsuko’s home town, you’re completely hooked.

It’s one of those rare movies to watch multiple times. If, like this writer, you saw it last year in a small cinema, to catch the new digital IMAX print on a bigger sized screen is a real treat. While scenes with minimal detail and movement show up the fact, other sequences are all the more effective. This applies not only to the big outdoors vistas where you’d expect it but also more intimate, everyday scenes. In short, compared to much smaller screens, the IMAX format allows Your Name’s visuals the room they need to breathe.

Your Name is out in the UK on Wednesday, August 23rd.

For another animation about Japanese life against the backdrop of impending disaster, click here.