In this Corner of the World

"Greasy movie"
A shock to the system: animation examines a young Japanese woman’s life in wartime up to and including the atomic bombing of Hiroshima - in cinemas this week

This tale of life on the Japanese home front during WW2 is set in the major shipbuilding port of Kure in the Hiroshima Prefecture. The nearest city to Kure is Hiroshima: once you know that, you know the story isn’t going to end well. Welcome to In this Corner of the World.

Heroine Suzu Urano must leave the small fishing village where she grew up and move to Kure to marry a low level naval clerk. Living with his family brings its own challenges, such as getting on with her new husband’s sharp-tongued sister. These characters accept that not only does their government know best but also the War is an historical inevitability that must be endured for the greater good. Yet although there are sacrifices to be made, the War itself mostly seems an abstract, distant event which for most of its five years doesn’t really intrude that much upon everyday life. 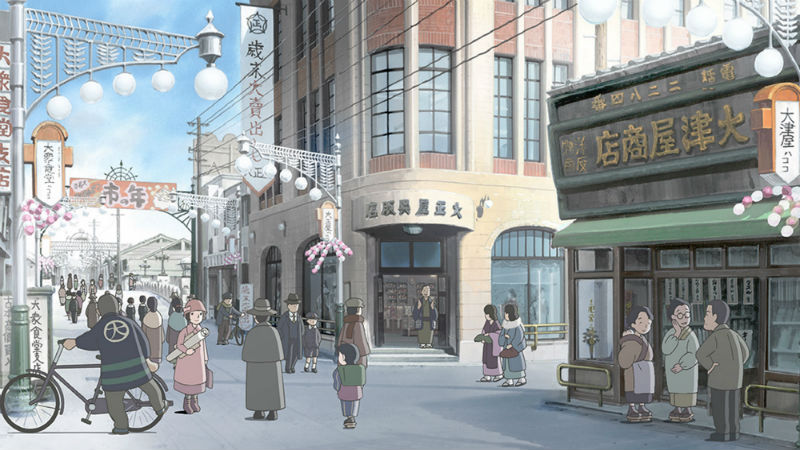 Suzu loves to paint and draw and often has her sketchbook with her. Occasionally she finds herself in trouble when officials catch her sketching things they don’t want anyone depicting in wartime. But mostly, she delights in nature and the world around her. Director Katabuchi similarly delights in the medium of hand drawn animation.

Fumiyo Kouno’s manga, originally serialised in Manga Action magazine between 2007 and 2009, went through a lot of trouble to research the long vanished environments of Hiroshima and Kure and in the film Katabuchi expends similar effort. The result is that the drama plays out in convincing settings which go some way to draw the viewer in. Alas, much of the meandering domestic narrative counteracts the undeniably impressive visuals. 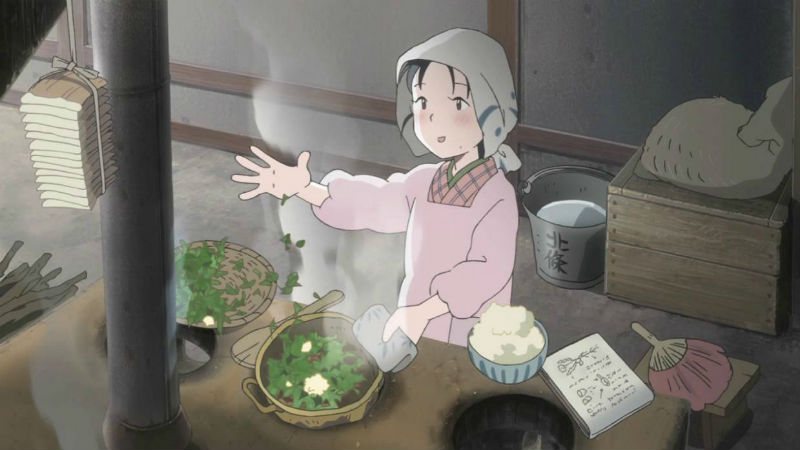 The final reel is another story, however. As American bombing raids reach Kure, the frightening realities of international warfare finally impose themselves on the civilian population. In something of a visual and emotional tour de force, Suzu and her small niece Harumi are caught in a blast in which Suzu suffers the loss of a limb. Suddenly it feels like we’re in a different movie, yet afterwards Suzu struggles resolutely to carry on and help others.

Worse is to come, though, in the form of a flash as the atomic bomb is dropped on the neighbouring city of Hiroshima. Initially no-one quite knows what has happened, although the full horror of the situation becomes clear to Suzu when she visits the area. Finding a small child wandering alone in the ruins, she and her husband adopt the girl who can be seen growing up in their post-war home as the credits roll. If the film ends on this optimistic note, its briefly seen, latter images of ordinary people affected by the harsh realities of conventional and nuclear warfare overshadow everything else.

In This Corner Of The World is out in the UK on Wednesday, June 28th.