This micro-budget whimsical science-fiction film has a visual palette similar to Barry Levinson’s Toys (1993), set in a near-future that looks like present-day with a twist of retro. One of the directors, Kentucker Audley, also plays Preble, a tax inspector who arrives at a pink house in the middle of nowhere in order to audit the dreams of Bella, an eccentric old lady. As it goes along, it gets stranger. Audley’s character ends up with a young version of Bella (played by Grace Glowicki) in dream sequences. All of her dreams are recorded onto VHS tapes. The relationship between the two is reminiscent of that between Sam Lowry (Jonathan Pryce) and Jill (Kim Greist), in Terrys Gilliam’s Brazil (1985). And there’s nothing wrong with that.

It’s a very cine-literate film, referencing everything from The Wizard of Oz (Victor Fleming, 1939) to Terry Gilliam and Wes Anderson, plus animation from the likes of Jan Svenkmajer and René Laloux, and fantasy films from the 1980s, such as Labyrinth (Jim Henson, 1986) and The Neverending Story (Wolfgang Petersen, 1984). The special effects have a handmade feel, like the work of Michel Gondry (Eternal Sunshine of the Spotless Mind, 2004). The result is a wonderful and genuinely independent film, held together with sweat and glue.

The directors have a background in comedy videos (especially co-director Albert Birney) and at times it does feel like a series of skits stitched together—which is actually fine. It’s their first film to have any real international release. 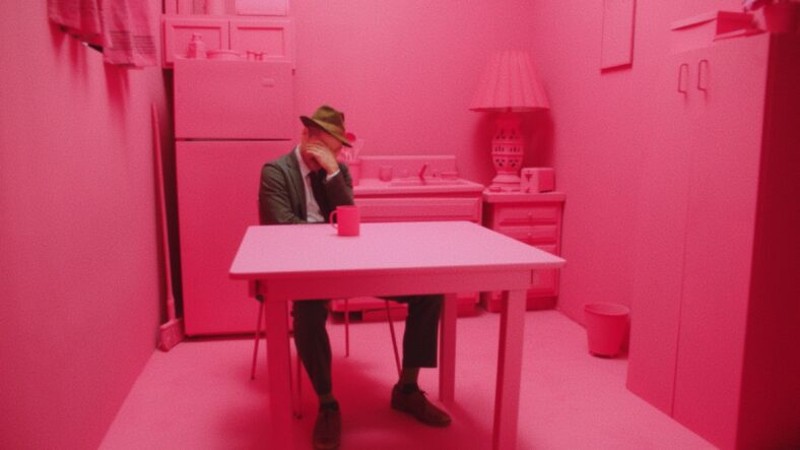 This bright and colourful film stands out at a time when indie films are trying to be as dark and edgy as they can be. It’s refreshing to see a film that unabashedly celebrates eccentricity and whimsicality.

Strawberry Mansion has something to say about humanity with a soft critique of capitalism in there as well. Audley and Birney infuse Strawberry Mansion with a sweet and playful tone that may be a turn-off to some jaded viewers. A refreshing counter-balance to the overwhelming amount of dark edgy cinema that’s currently in vogue. It’s the antithesis of Inception (Christopher Nolan, 2010), because it’s a series of dream sequences, but not a series of action sequences masquerading as dream sequences.

In a sort of stroke of genius, because of their working budget of about $200,000 the directors didn’t shoot on film. Instead, they shot it digitally, transferred the footage to 16mm, then transferred it back to digital with some added digital manipulation. It’s a clever way of making it look like film without incurring the high cost of film stock. The score by Dan Deacon, who usually works on documentaries, complements the images. There is some fantastic stop-motion animation work, and what they were able to pull together with limited resources. A sight to behold.

I hope that the two directors continue continue to make odd, low-budget movies instead of getting sucked into the world of mainstream filmmaking.

Strawberry Mansion is in cinemas across the UK on Friday, September 9th.