"Mostly clean movie"
A young couple’s relationship is put to the test by Covid-19, the threat of change, and unsupportive family members - LGBT Filipino movie is now on VoD

Young love can be a powerful thing; it is something built on excitement, joy, and the allure that this feeling will last forever (it rarely does), but one thing that is clear for most bludgeoning young romances is that it’s incredibly pure. The idea for Gameboys: The Movie originated during the start of the pandemic in 2020, with the YouTube series Gameboys considered to be the Philippines’ first hit “Boys Love” series. The show proved to be such a huge success that in 2021, Netflix picked it up, and thus, Gameboys: The Movie was born, and the film attempts to build on the success of the series by fleshing out the characters, delving a little bit deeper into their lives, and giving the story a little bit more muster – and it’s hard to argue against it doing that.

Gameboys: The Movie is an LGBTQ+ film directed by Ivan Andrew Payawal (who is also the creator behind the series) and it follows the story of gamers-turned-lovers Cairo and Gavreel (Elijah Canlas and Kokoy De Santos) as they spend some loved-up time together in Gavreel’s house for a few weeks during the pandemic. Almost instantly you notice the vibe that this film exerts, and one of the aspects that highlights this is the colour palate of the film; it is decorated with pastel colours, all of which are very soft and smooth, it goes hand in hand with the film’s etiquette. This is a quirky little film about two social media influencers and gamers, it is also supposed to be a light-hearted comedy, one that is camp and extremely frilly. There is one question that you might ask yourself almost minutes into the film though: is this all a bit over the top and sickly? It’s almost like a live-action anime, but I guess that’s the point of it.

What begins as a romantic holiday for the young, loved-up couple, soon turns into a relationship that must fight against the odds – Cairo is faced with the reality of returning to his province, whereas Gavreel must choose whether to move far away from home and be closer to his ailing family. They battled the stress of long-distance once, during the pandemic as well, but are they strong enough to overcome an even greater threat and learn to cope with the impending circumstance that is set to hit them both like a speeding truck? 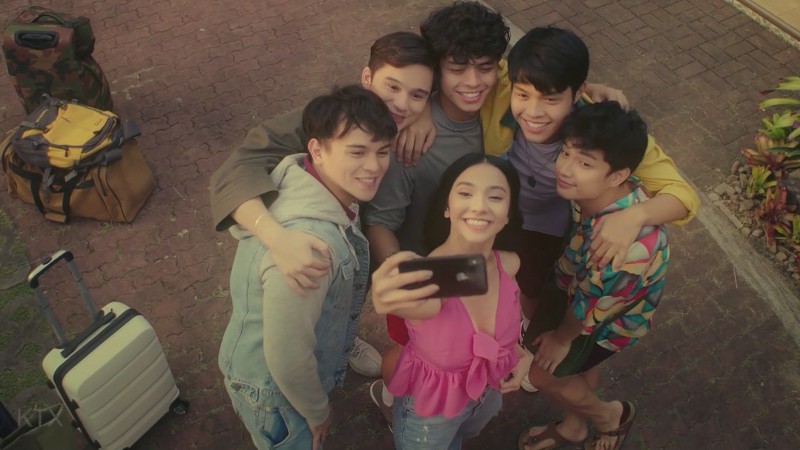 We as the viewer must also overcome a difficult hurdle: trying to move past the gut-wrenching and extremely cringey dialogue that litters this film – just one of many difficult aspects that this film consists of. Once you do break through that fire glass window, there is actually a sweet little story underneath it all. It is easy to criticize these sickly interactions – moments that activate the gag reflex an awful lot – because they sound forced, but they are the exact public displays of affection that we see in the street and watch with a slight envious feeling of nausea.

If the entire film was like this then it would result in a very difficult watch, but the introduction of the adult figure is what turns the story on its head. Aunty Susan (Angie Castrence) is introduced like an atomic bomb, quickly making her mark and expressing her feelings towards homosexuality and what it means in the eyes of God (that old chestnut). She is from a different generation and her views quickly disrupt this lovely little haven the boys have built for themselves. Aunty Susan lambasts the gay way of life, using religion as her defence and an attempt to guilt trip her nephew Gavreel – it is such an authentic dynamic that she has with the boys because it is one that occurs right across the world, and this shift in perspective is key to the films ongoing success.

The change in pace happens immediately after this introduction, the film quickly drops the frills and the excessive behaviour, as everyone comes crashing back down to Earth, and the questionable acting even improves; it becomes more refined due to the drop in tone and atmosphere, and the film is only strengthened because of it. Speaking of refined, the cinematography in this film is a rather pleasant surprise; there are a lot of aesthetically pleasing moments of symmetry included in this film, a lot of splitting the frame filmed from different angles and various heights that gives it a lovely aesthetic – there is even a beach shot that is strikingly similar to City of God… bring me more of this.

If you strip back all the vibrancy – vibrancy that could very well smother you with cuteness – there is a real message that is trying to be explored. The tribulations of heartache, death, the loss of family members, the real-life pain of sickness and self-acceptance – acceptance from others too – and this is what needs to be taken from a film that hides behind the plague that is social media, and the need to portray something that isn’t authentic. But sadly, even with these positive messages that are built into the film’s core, it just can’t shake off that melodrama aesthetic that you would find in a low-budget rom-com or a soap opera. The music is also overbearing and almost deafening, and the dialogue, as mentioned, is worthy of putting you off work for a few days – all this glitz and the pungent perfume that covers this film hold it back an awful lot.

Gameboys: The Movie is on VoD on Tuesday, September 13th.

Teenage girl meets her idol in a very awkward and compromising situation, in emotionally eviscerating drama from the Philippines - live from the Tallinn Black Nights Film Festival [Read More...]

This Filipino movie has more potential than its execution manages to accomplish, but its gay-for-pay topic is of great interest to LGBTQ+ audiences - from the Locarno Film Festival [Read More...]

A rose is a rose is a drug dealer: Filipino mother has to juggle the care for her three children with her meth business, until something goes tremedously awry, and the family has to reverse roles - from Cannes to the BFI London Film Festival [Read More...]