"Thoroughly sanitised movie"
The satirical disaster movie will not convert conspiracy theorists, but instead serve as evidence that Hollywood is indeed a propaganda machine; its aspirations are as inflated as the director's ego - in cinemas and also on Netflix

The producers of Netflix misfire Thunder Force (Ben Falcone, 2021) will be kicking themselves this awards season for forgetting to include Meryl Streep, thereby narrowly missing out on the four Oscar nominations forever enshrined in Don’t Look Up. The star-studded satire sees a pair of astronomers (Jennifer Lawrence and Leonardo DiCaprio) discover a 5km-wide comet on a collision course with Earth, only to realise nobody is willing to confront the existential threat.

Society’s need to take matters more seriously seems an odd message for what is ostensibly a comedy, albeit indicative of how funny it turns out to be. In reality Don’t Look Up is not a comedy but a disaster movie with satirical elements; a slight change of approach for writer/director Adam McKay, whose powers of observation never really moved on from Anchorman (2004). Here he ditches most of Vice (2018) and The Big Short’s (2015) fourth-wall breaking elements but keeps the echo chamber literalism, the millionaire finger-wagging, the soap box onanism.

The film is at its most earnest when the scientists are sat around congratulating themselves for having achieved precisely nothing, missing every opportunity to mock the progressives alongside the conservatives. That is not to say both sides are equally worthy of mockery, but the movie is about the dangers of polarisation and the need to convince the conspiracy theorists of facts regarding Covid and climate change. The only thing this will convince them of is that Hollywood films are exactly the kind of smug liberal propaganda they suspected all along. 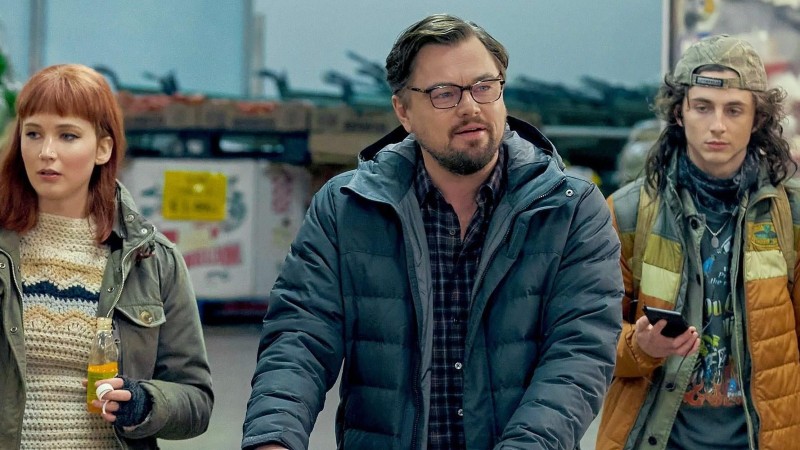 That lack of self-awareness pervades every aspect of the movie, constantly distracted by the very topics it deems trivial; celebrity culture, social media and the private lives of scientists. When the liberal characters enlist a pop star (played by Ariana Grande) to help raise awareness for humanity’s doom, the irony is entirely lost on the filmmakers who have done exactly that. In essence, McKay is the Ariana Grande character, warbling on and on about how we are all going to die in front of a massive Hollywood party.

Don’t Look Up proves good advice over two hours and 20 minutes of stock footage, A-listers improvising themselves into corners and plot holes the size of craters. This nonsensical narrative does not stem from some prescient absurdism à la Network (Sidney Lumet, 1976), nor does it have the political savvy of a film like In The Loop (Armando Iannucci, 2009). McKay’s shallow attempts at satire sail past their targets like comets made of toilet paper, his level of commentary and insight comparable to scrolling through memes circa 2018.

That such a poorly received feature should be nominated for Best Picture and Best Original Screenplay confirms there are certain non-qualitative factors (namely Meryl Streep and liberal grandstanding) that guarantee Oscar buzz, the hum of flies drawn to the stench of free Netflix accounts. The only comfort to take from all this is that if a 5km meteor does come hurtling towards Earth, then Adam McKay’s ego should absorb most of the blast. But if you do want to watch hours of footage of falling stars, the Academy Awards are on 27th March.

Don’t Look Up is showing now in cinemas and also on Netflix:

Unauthorised biopic of Dick Cheney, which has received eight Oscar nods, takes an insightful and disturbing look into the life of a deceitful and ruthless politician - now available on VoD [Read More...]