"Filthy genius movie"
This Oscar winner is a quietly wonderful exploration of grief and accepting the beauty of human complication - on all major VoD platforms on Friday, April 1st

Historically, films not in the English language have struggled to compete for the big awards at The Oscars. After all, the Academy Awards are the ultimate symbol of Hollywood’s fascination with itself, meaning anything outside of its bubble is ushered into the Best International Feature Film category. Times are slowly changing, however, and the success of Parasite a couple of years ago means a wider breadth of filmmaking has a shot at the hallowed Best Film award. A welcome addition to this year’s contenders is Drive My Car, a Japanese drama that more than merits the distinction.

Director Ryusuke Hamaguchi’s follow up to the fascinating Wheel of Fortune and Fantasy (2021) is the story of Yūsuke Kafuku (Hidetoshi Nishijima), a celebrated theatre actor mourning the death of his wife Oto (Reika Kirishima). Two years on from the loss, he is approached to direct a production of Uncle Vanya. He is given accommodation around an hour’s drive from the rehearsal space, in order that he practice lines from a tape recorded by Oto before her death. The company requires that he have a driver, reserved young woman Misaki Watari (Tōko Miura).

Initially sceptical, Yūsuke warms to Misaki’s driving, and the car becomes a haven for his dealings with the production, including a problematic young lead (Masaki Okada). The pair also discover a common bond through grief, and help each other face a life burdened by guilt from the past.

Where many prestige dramas require scenery chewing, Hamaguchi’s film has a gentleness that feels much more devastating. The messiness of life, and the absence of resolution in grief, are core themes within a multi-layered story that doesn’t stray too long on any one of its plotlines. While the friendship between Yūsuke and Misake is the backbone of the narrative, Yūsuke’s tempestuous collaboration with Okada’s disgraced star Kōji Takatsuki is just as compelling. A climactic scene between the two in the back of the titular Saab 900, where Kōji talks about looking completely into a person’s heart, is quietly mind-blowing. Meaning hides within meaning, with so much more said that what is on the page. 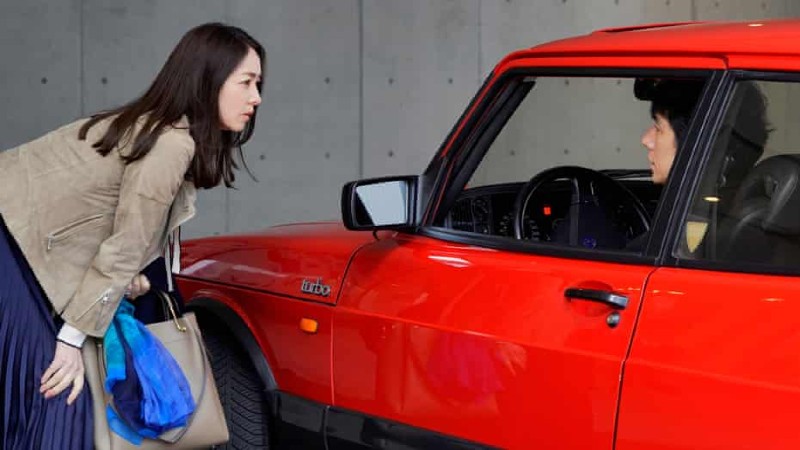 Nishijima has a substantial task, making Yūsuke a man worn down by pain but still seeking truth through his art. Aside from a big speech in the closing moments, it’s a performance of small movements, telling the audience everything through a sigh, or blunt remark. The emotional walls around him are as fascinating to see are built as they are to watch fall down.

Misake may initially seem like a supporting player, but it’s a role that grows into the film. Stoicly waiting beside the car with a cap and cigarette, Miura portrays her as a woman who makes no bones about what she has had to do to survive. There’s a beauty in her matter-of-fact approach: in one scene, when Yūsuke asks her to take him to her favourite spot in Hiroshima, they drive to a garbage dump where she wistfully comments that the shredded waste looks like snow. Finding the same beauty in the industrial that Yūsuke does in the artistic, it’s a performance that blossoms and benefits everything around it.

At one point, Yūsuke remarks “Those who survive keep thinking about the dead in one way or another”. Drive My Car’s brilliance lies in its celebration of the dirtiness of life, and how our greatest triumphs exist in simply carrying on.

Drive My Car is on all major VoD platforms on Friday, April 1st.

The Wheel of Fortune and Fantasy

This Japanese trio of short stories explores the power of the past in inventive ways - Silver Bear winner is on all major VoD platforms on Friday, July 1st [Read More...]