"Greasy movie"
A sweet portrait of a family during the Mitterand era, made with great affection and nostalgia, playing now in the BFI London Film Festival

There’s a certain serenity and magic that comes over me while listening to the radio late at night. It can often feel like you’re the only one listening to the radio host while the rest of the world has gone to sleep. Named after a late-night show that accompanies truckers on long-distance journeys, Passengers of the Night has a similar kind of soft energy. Director Mikhaël Hers transmits this personal-feeling story to us as if he’s talking alone in a radio booth, creating an ode to both the bonds of family and reminiscences of the era in the process.

Like a lot of French films, it takes a broad, novelistic approach, taking us on a journey through the 80s, a golden age for the left, opening on François Mitterrand’s election on 10th May 1981 and ending with his decline. Hers shoots on film, mixing hazy, muted images with archive footage, creating a nostalgic feel for the time, further accompanied by classic 80s bands like Television and Lloyd Cole & the Commotions. Paris, photographed from all sides, looks particularly dreamy here, with Eric Rohmer films playing in Marquee cinemas, people playing tennis against buildings, and punk parties by the Seine.

Charlotte Gainsbourg stars as Élisabeth, a recently divorced mother looking after her two teenage children, Matthias (Quito Rayon-Richter) and Judith (Megan Northam). Matthias is a classic randy teenager, staring at girls in the apartment block opposite them and dreaming of the first time he will have sex. Judith is the political one, grateful for Mitterand’s election and holding plans to run for office one day. As far as families go, they get on pretty well, Hers electing to explore personal development rather than engineering generic conflicts. 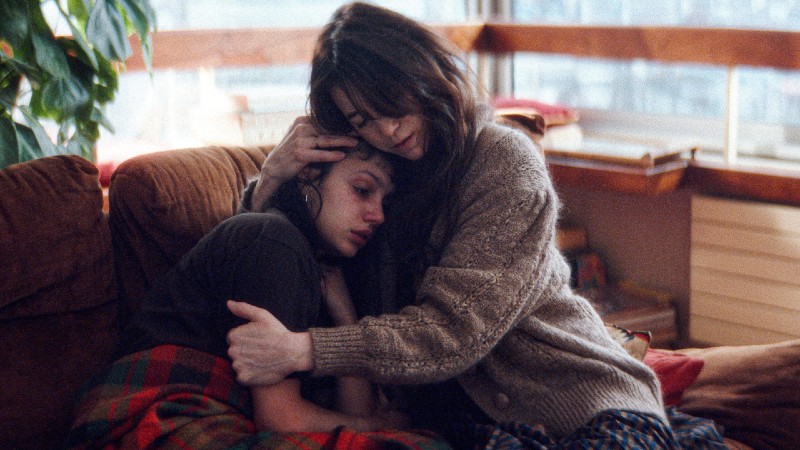 But Élisabeth has to make ends meet for his children and applies on a whim to a late night radio talk show, where people call in and tell their stories. Quite the opposite of modern radio talk shows, which thrive on debate or conflict, Passengers of The Night is a more relaxed and hush programme, simple allowing people to tell us about their lives. Rather frustratingly, we don’t ever see any of these shows in detail, apart from one guest, the enigmatic 18-year-old Talulah (Noée Abita), who lives on the streets.

Élisabeth invites Talulah into their home, but her secrets never unveil. Like the drifter in Agnes Varda’s Vagabond (1985),she is a woman without a past. Usually this would irk me, but it fits in with the central theme of the movie that some secrets, whether written, spoken or implied, are better left in the past, better existing in the memories of just one person. The final result is a rather lovely film, one that never moved me that much, but still evokes a particular time, place and feeling with bittersweet ease.

Passengers of The Night played in the Competition section of the 72nd Berlinale, when this piece was originally written. It is out in the UK in October as part of the BFI London Film Festival.

Francois Ozon's male version of The Bitter Tears of Petra von Kant never justifies its own existence, either as a remake or as a portrait of Rainer Werner Fassbinder himself - in cinemas on Friday, December 30th [Read More...]