"Thoroughly sanitised movie"
Francois Ozon's male version of The Bitter Tears of Petra von Kant never justifies its own existence, either as a remake or as a portrait of Rainer Werner Fassbinder himself - in cinemas on Friday, December 30th

Every remake has one central question to ask: why does this film actually have to be made? The answer eluded me throughout Peter von Kant, François Ozon’s tepid French-language remake of Rainer Werner Fassbinder’s classic 1972 film The Bitter Tears of Petra von Kant. The genders may be flipped, but it captures little spirit of the original while treading no new ground.

The year is the same, 1972, but the action has moved from Bremen to Cologne. Peter von Kant (Denis Ménochet) is now a filmmaker. In remaking Fassbinder, Ozon essentially recasts von Kant as a version of the great German himself, with Ménochet attempting to replicate his large posture, towering gait and menacing bursts of anger while snorting Scarface-levels of cocaine. He is constantly awaited on by the silent Karl (Stéfan Crépon), a weedy assistant with a handlebar moustache. Suffering from a break-up, the petulant filmmaker is granted a new lease on life by the arrival of Amir (Khalil Gharbia) — both beautiful yet vulnerable, he falls quickly into his hands. But love and art are a dangerous mix, with von Kant’s manipulations quickly descending into petty neediness.

“Great filmmaker, human shit,” quips von Kant’s friend Sidonie (Isabelle Adjani), a remark that could be applied to Fassbinder himself, who completed 40 films before his death by overdose at 37. But anyone expecting any new insights into the mighty, taboo-busting filmmaker will be disappointed, Ménochet aiming for dark drama but landing on broad soap opera instead. The supporting actors aren’t particularly interesting either; in fact, it really does just feel like they’re going though the lines. 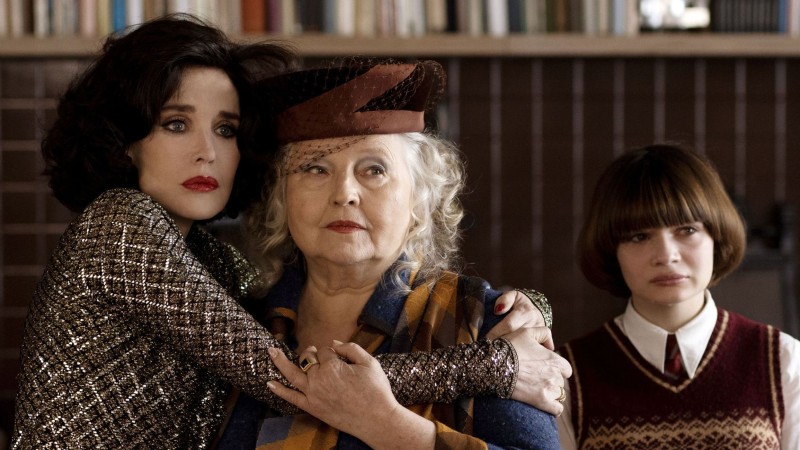 Talking of the actual words in this “adaptation”, it’s quite remarkable just how rigid it is. Even banal lines such as the proffering of coffee or the booking of flights are kept almost exactly the same; making me wonder why this was staged as a film rather than as a play. And while the set is well-designed — from the film posters on the wall to the beautiful models-blown up Helmut Newton style — and the costumes are typically brilliant from the filmmaker of 8 Women (2002), that same sense of lived-in sadness that characterised Petra’s apartment is sorely missing.

That space was navigated in Petra von Kant with some of the best blocking committed to film, especially within just a single space. And while it would be fruitless for Ozon to replicate the impeccable cinematography from Michael Ballhaus in the original, it would’ve at least been effective for the film to at least give us a similar sense of space. Instead, Ozon prefers conventional filmmaking techniques, such as cross-cutting conversations and inserting reaction shots instead of the languid, moody filmmaking of the former. It undercuts the effectiveness of the adaptation massively — instead of deeply mannered high German drama, we get a micro-dose of French farce that actually feels more artificial than the notoriously stagy Fassbinder while retaining none of the same dark emotion.

Fassbinder looms large over the German filmmaking psyche, a filmmaker unafraid to tackle the norms of West German society through his depictions of sexuality, gender and race. As a result, it’s no surprise that Ozon’s doodle was chosen as the opening film. Not only is this a major step down from his previous Fassbinder adaptation, Water Drops on Burning Rocks (2000), but the ultimate tribute: in attempting to re-do Petra von Kant, he reminds viewers just why Fassbinder is such a revered filmmaker. It’s never just about the script; it’s how you adapt it that matters. The notes might sound the same, but the music is completely off-key.

Peter von Kant opened the competition of the 72nd Berlinale, when this piece was originally written. It premieres in the UK as part of the 66th BFI London Film Festival in October. In cinemas on Friday, December 30th.