You Resemble Me (Tu me resembles)

"Dirty gem"
Dina Amer’s debut film is a stunning portrait of a vulnerable woman who finds herself and then loses herself in the comforting wrap of extremism - in cinemas and also on Digital from Friday, February 3rd

When a white person kills a bunch of people, we have a tendency to look to their mental health, question their parenting, show pictures of them as children and wonder how such little angels could go so wrong. When a person of colour kills a bunch of people, they’re terrorists and that’s that. Though sometimes, they’re not. Sometimes they’re are mental health issues; they’re are nuances and complexities that get lost in the media rush to condemn and to demonise. We rarely see photographs of what they looked like as children.

With Hasna Ait Boulachen two of the three photographs that were published following her death were actually of different women. Hasna became famous as Europe’s first female suicide bomber in the wake of the Bataclan terrorist attack. This nomination proved as fake as most of the images of her and as a woman her narrative changed dramatically as more details emerged. The puzzle of who Hasna actually was is the subject of journalist Dina Amer’s first film You Resemble Me.

We first meet Hasna (Lorenza Grimaudo) as a child. It’s her younger sister Mariam’s birthdays (played by real life sister Ilona Grimauldo) and providing her with a special day falls to Hasna, who gifts her a stolen dress and a day out playing in the streets. However, it is a brief moment of joy. Her home is dominated by a mother (Sana Sri) who is violent when not indifferent, unloving and bent on sending money back to Morocco. Hasna runs away numerous times, from home and then from her foster families. She is separated from her sister and grows into an adult (now played by Mouna Soualem) with a drink problem and who falls pray to the predatorial men who home in on her damaged self-esteem and marginalised social position. 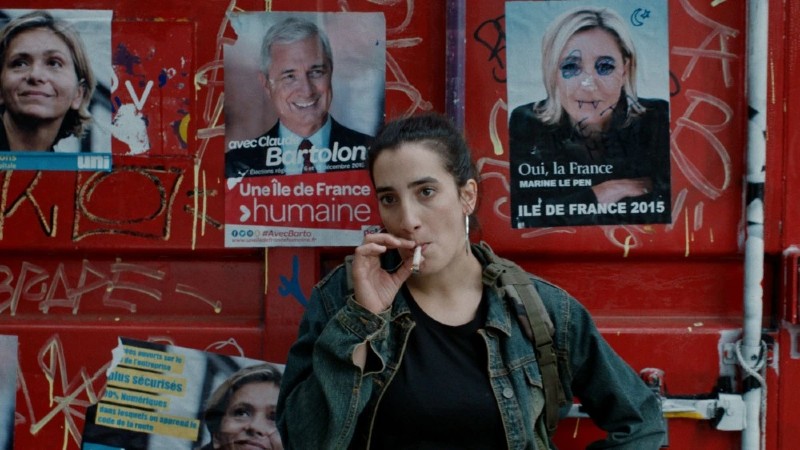 She has a chaotic life, of bad decisions, confrontations tossed hither and yon by her own emotional weather as well as the vagaries of the way the world treats her. Her distorted sense of self is rendered a little literally by the use of three actresses to play adult Hasna, including director Amer, and having her faces morph between the three. However, Soualem is the principle actress and her performance is a tour de force of humour and sensitivity. Behind the grime of the years, there’s still hidden the little girl who went shopping lifting so her younger sister would have a present when she woke up.

A sudden turning point comes when she recognises her cousin on the news as a wanted Jihadist. Despite the shock of her friend, Hasna adopts Islam as a new identity as much as a religion and contacts her cousin via Facebook. Her conversion offers her a moment of personal reinvention, redemption: both wiping the slate clean and offering a final sense of belonging. Her decision doesn’t have a simple cause and effect. She is confused herself as to exactly what she wants, posing in her hijab as if for rap album, full of confusion and contradiction, but yearning for some sense of elusive self.

Amer and fellow screenwriter and cinematographer Omar Mullick have created a fascinating portrait of a woman who ended up as a footnote in history, an inaccurate media scandal that was soon forgotten in the onslaught of horror and minimally corrected. Amer never tries to make out that Hasna was in some way justified, just that she was a human being. Nothing is cleared up. Nothing is fully understood. An extended documentary like coda underlines the remaining question marks. But revelation sometimes involves understanding just how confused we all really are. And what damage can result in that confusion and in not recognizing that confusion.

You Resemble Me premiered at the Red Sea International Film Festival in Jeddah Saudi Arabia, when this piece was originally written. It shows at the Human Rights Watch Film Festival UK, streaming to UK and Ireland until March 25th. The digital screening also includes pre-recorded Q&A with Dina, accessible to anyone with film’s ticket. In cinemas and also on Digital from Friday, February 3rd.