When Indian-born Nusrat Durrani arrived in the US as a teenager his head was bursting with excitement. He wanted to make it to the music industry. The American dream mandates that anyone can achieve anything they wish, yet his ambitions seemed hardly tangible, at least at first. Later in the film, we learn that Durrani became a distinguished media mogul, serving as Chairman of MTV Networks’ Diversity Council, and now authoring this deeply personal documentary. The country where he chose to live did not let him down. But Durrani is only one of the many characters in this kaleidoscopic look at American identity. And others did not enjoy the same success as the helmer.

We quickly learn that the US has failed pretty much every single minority. The indigenous people that originally populated what is now the largest country in the Americas have been mostly exterminated. Black people have been marginalised and disenfranchised: there are more black men incarcerated now than there were black males enslaved in 1850. The police have become the new slave masters. Blacks are consistently profiled, with a hapless young man being fatally shot for committing a very unusual offence: jogging.

Durrani notes that the establishment is very ungrateful towards African-Americans: “every American artistic expression started in the black community: folk, Rock, blues, soul, RnB, rap, hiphop, break dancing, tap dancing, spoken word”. Which beggars the question: why does the country punish these people instead of celebrating them?

The Hispanic too have been marginalised. Politicians pay little attention to the fast-growing community, except perhaps at the time of elections. Jacqui delivers a very awkward speech in Spanish in order to lure the Latino vote. Even whites, who make up 62% of the US populations have been historically discriminated: the Slavs, the Italians and the Irish were once perceived as outsiders, and some still struggle to integrate. Disability is also a literal barrier to those reaching for the star-spangled banner. Intersectionality poses a double challenge, reveals a wheelchair-bound African American.

In addition to race and disability, religion also poses a challenge to ordinary Americans, with Muslims suffering from rabid islamophobia for two decades, since 9/11, aided by Donald Trump’s inflammatory rhetoric and proposed blanket ban on travel from all Muslim countries. 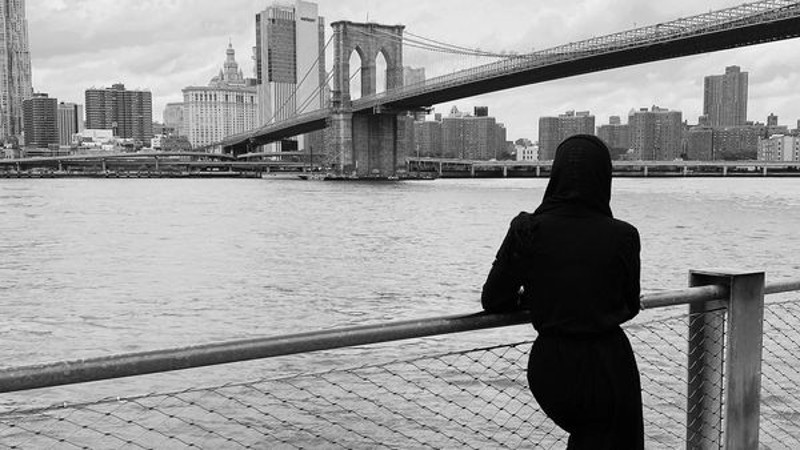 These various people describe the elusive American dream as a “nightmare”, a “hallucination” or plain “bullshit”. They can hardly integrate, let alone buy a very large house with abundant consumables. A number of questions are repeatedly raised as these people share their tragic predicament: “Is America possible”, “Did slavery end?”. These uncertainties constantly ripple through the air, intoxicating a country that boasts being “the land of the free”.

The director blends very confessional talking heads statements with archive footage (9/11 is particularly prominent) and poetic devices in order to create a multilayered yet simple and straightforward movie, one both Americans and non-Americans are able to fully comprehend. The voice-overs (from the filmmaker and his characters) are heartfelt, lyrical, at times laborious, as if choking with pain and anguish. The movie often has a vintage feel, with blurry images, wear and tear created digitally in order to resemble dusty 35mm. It’s as if the director was saying: “racism is as deeply imprinted in American society as splodges and scratches on an old film reel”.

Durrani confesses that he was unprepared for the deeply-ingrained racism that permeates every class and every layer of the world’s most powerful nation. As an immigrant, his allegiance remains split between his birth and his home nation. He often wonders how much India has changed in the past 25 years. Durrani could neither say goodbye in person to his mother nor attend her funeral, after she passed away to Covid. At times, the immigrant experience can be cruel and unforgiving.

The film wraps in a more upbeat note, highlighting the personal achievements of the filmmaker, while the oneiric innocence of children sends a refreshing message of hope. Durrani boldly claims: “The American dream isn’t just ours, it belongs to every dreamer in the world”. I wish I could share Durrani’s optimism, but I come from Latin American country (Brazil) consistently subjected to the atrocities of American interventionism: coup d’etats, dictatorships andruthless Friedman-ean experiment.. The American dream has never extended to foreign policy, and it probably never will. Latin America needs to wake up from the American nightmare before we are allowed to dream again.