"Greasy movie"
A mother searches for her absent son in the shadow of the Hong Kong protests, inviting the audience to enter a hypnotic space - watch it for free during the entire month of December only with ArteKino

Director Jonas Bak’s German drama Wood and Water is either blessed or cursed by its stoicism. I say either because this is a particular type of film for a particular cinematic taste. Executed with patience, the director’s observational camera is as interested in the spatial as it is observing its character. The most effective description of Wood and Water may be as an amalgamation of art, story and character, however, its backbone is more plot than it is story.

As one chapter closes, another opens for Anke (Anke Bak), as she begins her retirement. Bak wastes no time in establishing the observational aesthetic that will drive his film, watching from a distance Anke pray, then depart the church where she’s worked as an administrator. She cycles home, the camera watching from its birds eye view as she disappears into the distance, among the rooftops of rural German homes.

Anke is disappointed when her son Max, who is living in Hong Kong is unable to attend a family holiday with his mother, sister and cousin. His absence is excused by the flight restrictions imposed, a response to the pro-democracy protests. The impression, however, is that Max’s absence over the past three years suggests it’s a convenient excuse. Anke travels to Hong Kong to see Max, but finds herself spending time alone, and explores the place that is home to her distant son. 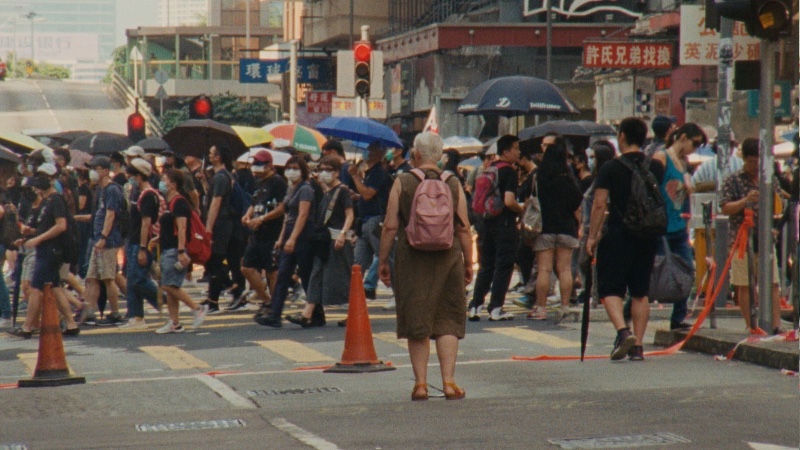 Memories are shared on the family holiday and joint celebration of Anke’s retirement, yet the director chooses not to share an important event with his audience until later in the film. It offers a different context to the nostalgic remembrance of past holidays, and makes the invisible Max who we never meet, more intriguing. Beneath the surface there’s a story left untouched, common in stories such as this, driven by patient observation and spatial aesthetics.

A comparison early on appears to be to Sofia Coppola’s Lost in Translation (2003), about an American actor, played by Bill Murray, confronting an existential crisis in Tokyo. Wood and Water is a more restrained character piece, inclined to offer only a fleeting insight into Anke. Whereas Coppola’s approach was for her character to dominantly reflect our own anxieties and existentialist thoughts, Bak’s approach is to create a hypnotic and meditative space for his audience to enter. It’s about the feelings we project onto Anke, although she echoes that feeling of wandering through space and time, that can be a pleasant or a troubling experience.

Wood and Water never entertains exploring existential themes. The slow and observant pace of Anke’s journey, juxtaposed with the energy of the protests, and their ongoing looming threat, along side Max’s absence, conveys the idea that we reach a point in our lives where the world moves on without us. Bak is not cynical in this expression that his audience can either acknowledge or look past. It’s an idea, and in cinema ideas resonate subjectively. If we’re to acknowledge it, the director offsets it with how we must grow our lives, finding new connections and new purposes in the shadow of fading relationships. It doesn’t mean we must surrender our loved ones, but we must accept that in living our lives, we can grow apart.

Watch Wood and Water for free during the entire month of December only with ArteKino.

This Colombian road trip is both an exploration of nation and character, a modest yet touching drama — live from Tallinn Film Festival! [Read More...]

The first human being born in Mars returns to Earth in order to meet his grandfather, in this expressionist Belgian sci-fi - from the Tallinn Black Nights Film Festival [Read More...]