"Mostly clean movie"
Kenneth Branagh remembers the Troubles and the pain of departing from his birth city at the age of just nine, in this lukewarm childhood memoir - now available on various platforms

In this largely autobiographical and historical tale, Kenneth Branagh illustrates a short segment of the Troubles that afflicted Northern Ireland for nearly four decades from the perspective of nine-year-old Buddy (Judy Hill), the director’s very own proxy (Branagh was indeed the same age as Buddy when the story takes place), and his protestant family. The action begins on August 15th, 1969, as Protestants attack Catholics living outside their unofficially designated areas. Molotov cocktails, andshattered glass fly everywhere, with arson soon ensuing. Buddy hides under the kitchen table, while his terrified mother (Caitriona Balfe) scrambles to find his brother.

There are bursts of fighting throughout the entire movie. A supermarket is raided and Buddy steals a large package of Omo laundry powder. His furious mother forces him to return the item to the shelf where it came from, only to be told by rioters: “we don’t give things back”. Moments of friendship and relative tranquillity intersperse these tense moments. Locals must carry on with their lives as normal. Buddy befriends a Catholic girl around his age. Hi spends precious moments with his adorable grandparents (Judi Dench and Ciaran Hinds). There is joy and tenderness in the most trivial moments: at the dinner dinner, blabbering with the neighbours, etc.

Buddy’s farther (Jamie Dornan) is a carpenter working temporary gigs in England most of the time. His wife doesn’t have much trust in her spouse, blaming the seemingly doting man for their piling debts. She is often angry and despondent, seemingly on the edge of sanity. Leaving Belfast seems like the best solution for the entire family – for both safety and economic reasons. They contemplate moving overseas, perhaps the US or Australia. But it is England that seems most feasible. Buddy is concerned that if they migrate he will never see his grandfather again, his old man however reassuring him: “don’t worry, I am not going anywhere”. 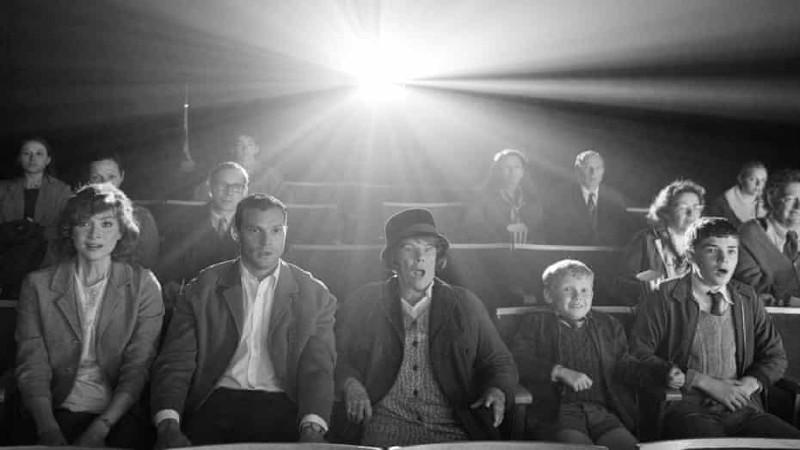 This almost entirely black-and-white drama is highly theatrical, most of the action staged either inside or near Buddy’s house. The establishing shots showing a large, highly industrialised city come at the first sequence, before we deep dive into the small world of Buddy’s family. The simple and relatively straightforward story is mostly predictable, with audiences well aware that Kenneth Branagh grew up in England. The movie continuously attempts to climax, every time Protestants and Catholics collide. It does not side with either religion, instead focusing on the emotions of the child and his family. The conflicts however feel too staged and contrived, failing to move viewers. The performances are lukewarm and the script is lacklustre. Branagh fails to turn a personal story into a universal one. Not even Dame Judi Dench and a rendition of power ballad Everlasting Love lift this mostly tedious movie. The majority of viewers were left feeling cold and bored. I watched it in a fully-packed Estonian cinema and audiences barely reacted to the story.

The most vibrant moments are inside the movie theatre. Buddy and his family watch and react passionately to musical fantasy Chitty Chitty Bang Bang (Ken Hughes, 1968). The film projection appears in full colour, as opposed to Buddy’s real life, which is portrayed in black-and-white. A clever symbolism illustrating both the power of cinema and the lifeless sense of desolation that intoxicated the capital of Northern Ireland at the time.

Don’t expect a incendiary political statement from Belfast. Check Eoghan Lyng’s top 10 dirty movies about the Troubles for a list of far more engaging films on the same topic.

Belfast showed at the 25th Tallinn Black Nights Film Festival, as part of the Screen International Critics’ Choice section. It’s out in cinemas on Friday, January 21st. On various platforms on March 23rd.

10 films about The Troubles

Eoghan Lyng lists 10 dirty movies about the chaos and conflict that prevailed in Northern Ireland for several decades, until the signing of The Good Friday Agreement in 1998 [Read More...]

A trove of national treasures is both in front of and behind the cameras in this imaginative exploration of Shakespeare's final years - on Netflix on Sunday, January 3rd [Read More...]

Shane McGowan gets the Julien Temple treatment with the help of a limelight grabbing Johnny Depp - in cinemas on Friday, December 4th; on VoD and DVD the following Monday [Read More...]