"Dirty gem"
Shane McGowan gets the Julien Temple treatment with the help of a limelight grabbing Johnny Depp - in cinemas on Friday, December 4th; on VoD and DVD the following Monday

Confession: The Pogues mean nothing to me beyond that Christmas song. A pleasant surprise, then, to get a potted history of the London music scene through the late 20th century, contextualised with stories of Ireland and the IRA activity in those decades. There’s a lot of context though. It’s a good 30 minutes on the idylls of Irish village living in a tight-knit family before music gets a look in. These rustic tales are great and add necessary colour to McGowan’s motivations but the whole film could stand a bit of pruning. Diehard Pogueheads may disagree.

Success comes late in the film but modern-day Shane McGowan, 62, is there from the start, looking and sounding 25 years older than his age. The wit is preserved but he’s locked in a failing body; trapped in a cage of his admittedly unashamed making. Thanks here to the Spanish subtitles which helped me piece together some of the more slurred sections. A death rattle snigger is alarming but soon proves to be a long standing trait.

The mostly chronological narrative sketches a backbone, fleshed out by archive footage, talking heads and family photos. It’s a rockumentary – you get the idea. It’s also embellished by frequent, hit-and-miss animations, starting with fairytale imagery of Irish folklore and moving into vignettes of Shane’s more graphic anecdotes. Styles run from Ralph Steadman of Fear and Loathing fame to the Beano’s Bash Street Kids. The whole thing is liberally punctuated by interviews between McGowan and his long-term partner, producer/friend/producer/did-I-mention-producer Johnny Depp and Gerry Adams, of all people. Sometimes adding depth, sometimes adding just Depp. 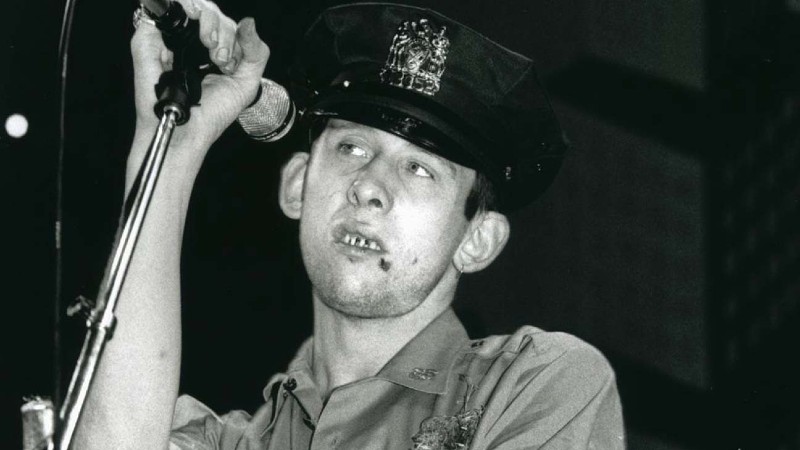 Adams in particular proves adept at drawing Shane out, trained as he is by a lifelong career on the other side of conversation. There is a lot of history there and McGowan has been an active participant. Songs about The Troubles written at the height of Pogues fame raised awareness for the mistreatment of average Irish people in the UK and contributed to the exoneration of the Birmingham Six. His stated aim and success in preserving Irish music and culture through times of turmoil is the heart of the piece.

Owing to the time period covered, there’s a cracking catalogue of tunes that helps break up The Pogues’ music that kind of runs together (prove me wrong). There’s also a tonne of archive footage from even before The Pogues had formed – McGowan having cut his teeth, bruised his body and pierced his face as a semi-infamous punk scenester. The transition from punk bands to The Pogues’ contemporary reimaginings of Irish trad is great to see. The music seems to have saved him too, for a time. The dark depths of his drug use from a startlingly young age are mental and borderline unbelievable, if not for the husk you see before you.

All parties land on a turning point of the ‘big world tour’, potentiated by greedy management and sell-out music. Same as it ever was. Having now heard the bizarre string of globe-trotting songs including Summer in Siam and Fiesta, I can understand the turn to heroin. Yet there is no denying the trajectory of his life path, starting with the stereotypically boozy Irish background – “I started drinking at 6”. Despite repeat institutionalisation, none of the help managed to stick. Overall, whilst covering equally dark ground, Crock of Gold doesn’t quite stand up to Asif Kapadia’s powerhouse tryptic of tragedy that covers the lives of Ayrton Senna, Amy Winehouse and Diego Maradona. But the approach is so different as to be incomparable. Still, something is missing. Maybe you had to be there.

Crock of Gold: A Few Rounds with Shane MacGowan premiered at the San Sebastian Film Festival, when this piece was originally written. It’s out in cinemas on Friday, December 4th. On Digital and DVD the following Monday.

We all go a little MAD sometimes! The frontman of the colorful Camden Town act Madness isn't just a joy to listen to; his life story is also a real pleasure to watch - on Sky Cinema and NOW on Saturday, August 14th [Read More...]