"Greasy movie"
Indigenous teen in search of her mother embarks on a literal and metaphorical journey with more twists and turns than the local river - in virtual cinemas and VoD on Friday, May 7th

Adapted from Bonnie Jo Campbell’s eponymos novel and set in late 1970s Michigan, Once Upon a River follows the footsteps of Indigenous 15-year-old Margo (Kenadi DelaCerna). Her mother abandoned her a year earlier, leaving behind nothing but a goodbye note. Her Indigenous father is fatally shot during a tragedy in which Margo unwittingly played a significant part. The hapless teen then sets off on a quest to find her eloping mother.

Margo is not your average teenager. She has outstanding survival skills; she is an apt hunter, fisher, and she can even skin her game. She can comfortably row up and down the Stark River, which will eventually help to take her to her mother. The titular river is indeed both literal and metaphorical. Socially, Margo is far less adept: she has a turbulent relationship with her white cousins, and engages in a very dispassionate yet consensual sexual relationship with her white uncle. She is mostly stoic, with a blank expression on her face, even at sex. Her Indigenous features are prominent: olive skin, big black pearly eyes, long hair, thick eyebrows, protuberant nose. Her mother (who we only see in the second half of the film) is presumably white, and she probably feels marginalised because of her race.

What Margo does have in common with other teenagers is that she is prepared to take instinctive choices, and the price to pay is often very dear. Quiet, passive demeanour at odds with her fiery temperament. As a consequence, she falls in a number of trappings that she set out to avoid, and ends up in a very unenviable situation. 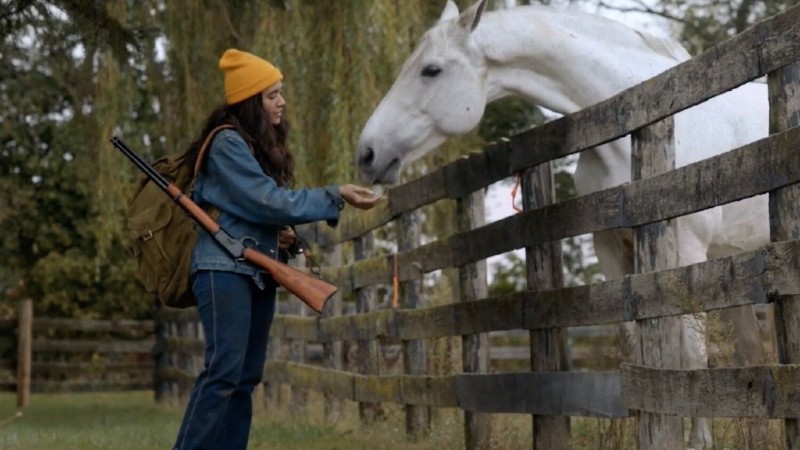 Motherhood is one of the film’s central pillar, and it’s a topic not without contradictions. Margo seeks to reconcile with her mother’s very own broken notion of parenthood, until a very ironic twist sends her off-piste. Perhaps she does not wish to make up with her mother or become her reflection in any way, shape or form after all.

The topic of race is also a complex one. Margo is unaware of her origins. She reveals to an Oklahoma Cherokee with whom she has a brief and lustful encounter that she does not know the name of her tribe.

This subtle blend of coming-of-age, feminist and Indigenous tale has some moving moments, particularly Margo’s awkward reconnection with her mother. Yet it fails to deep-dive into any of these topics, instead getting diluted in an increasingly multi-threaded narrative. There are way too many characters, often flat and redundant. The wealth of events is such that the numerous twists and turns feel banal towards the end of the movie. Like a long and tiring river journey. A lot to pack in in a film with a duration of less than 90 minutes.

Once Upon A River is out in virtual cinemas and also on Digital on Friday, May 7th.